Not shopping and a chicken

Hmm. I started this post halfway through my "no shopping" month, and here I am, at the end of it already. I should have had all kinds of spare time, what with not shopping and everything, but it's been a busy month.
I did make a few mindful exceptions to the "no shopping" rule. There was some French sea salt butter that had date-expired at Grocery Outlet and I was determined to snag some, so I haunted the dairy section for a few days until I caught the dairy manager and persuaded her to mark it down. Came home with five pounds of deliciousness, as well as a few Lindt bunnies that I couldn't resist. On an earlier haunting, I bought a big box of Haagen Dazs salted caramel ice cream bars that spoke to me. What can I say? Also bought a 20-pound box of peaches with a bulk order I was running, but figured that hardly counted because it wasn't from a store. So I wasn't perfect, but my fridge and pantry have a few holes in the shelves now, thank goodness.

I am thinking that I will continue with the avoidance of shopping for a few more months. I have missed bananas and onions, and Jeff has missed his orange juice, so I will be less stringent.

Here are some highlights from the month.

Jeff was up in the attic for some reason and said to me, a couple of days later, did you know that there is a bunch of toilet paper in the attic?
What? I said, I thought you had brought it all down ages ago!
Well, not, apparently. So this made an appearance, a stash from at least twenty years ago, I am sure. Amazingly, it is still usable, a testament to the durability of the product. I am trying to ignore the dead spider parts that are scattered throughout the packages. Early in the month, I used up the last of a very large bottle of soy sauce (Costco-style) that has been in my fridge for about the same length of time that the tp has been in the attic.
Awesome. Annihilating FDA guidelines in as many ways as humanly possible. 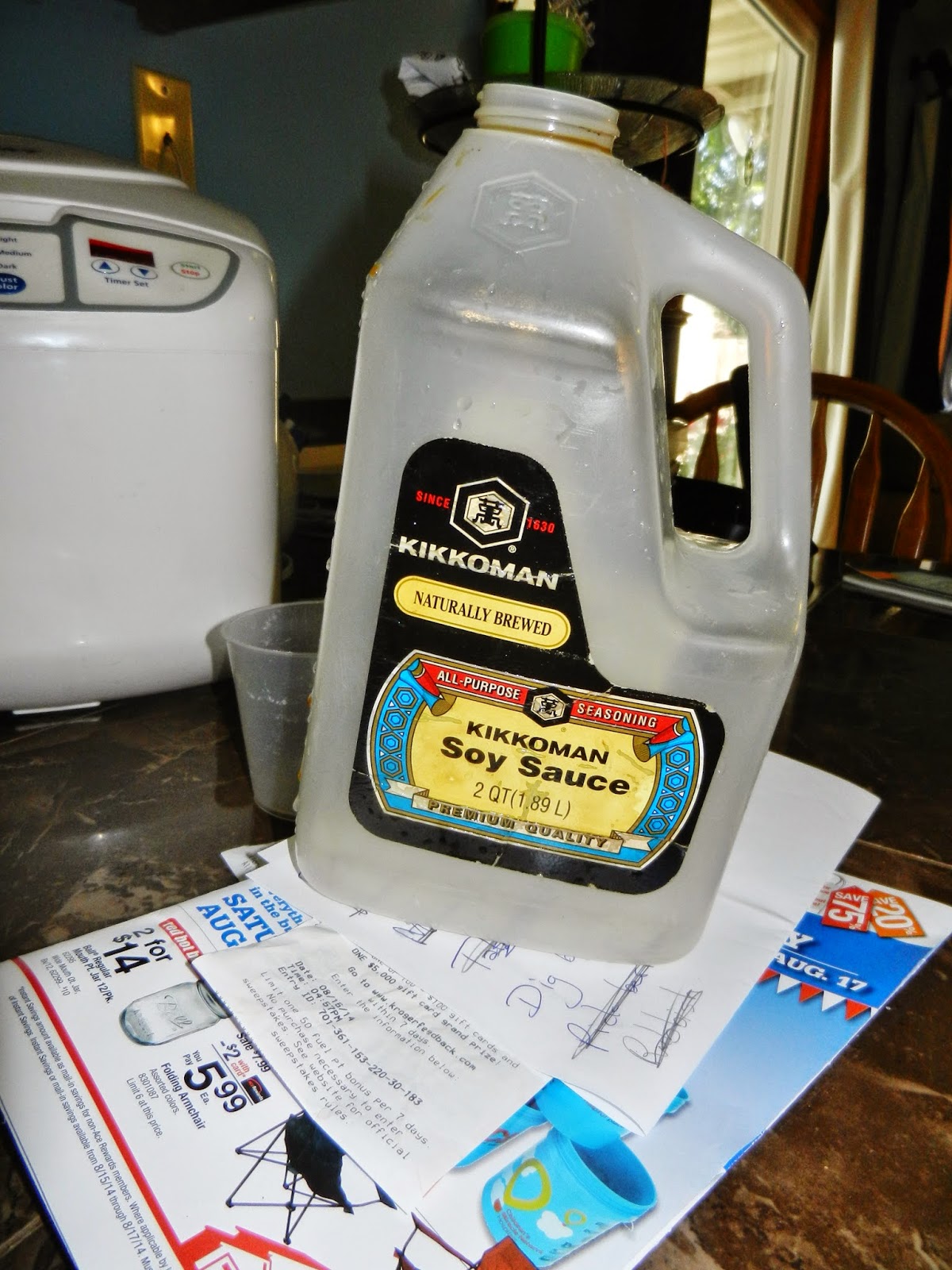 I started blinging my remaining bowling ball and ran out of glue. I really tried to resist, but ended up sneaking in and out of JoAnne's as quickly as possible to get some more E6000.
Guilty as charged. 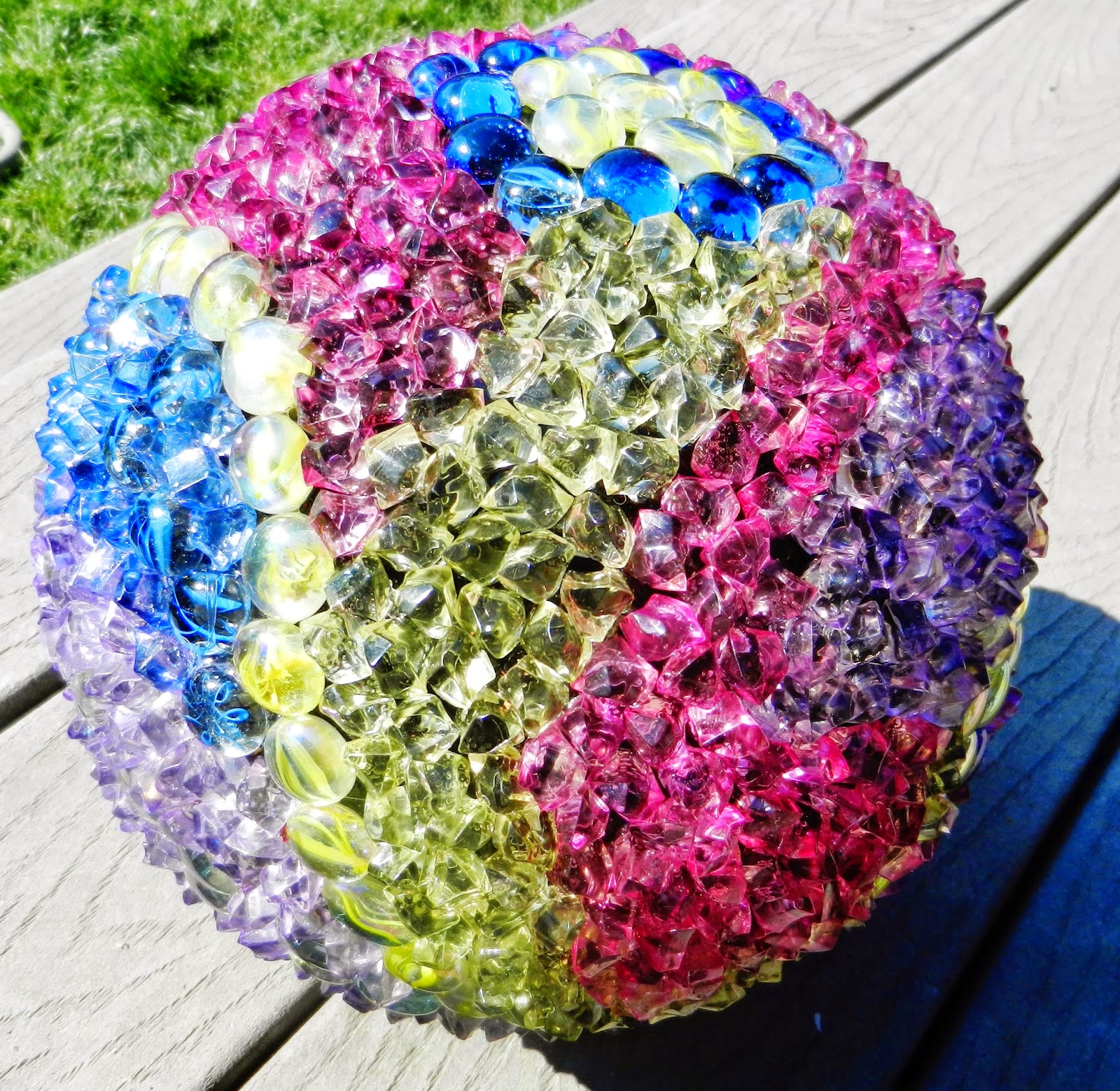 Not sure why I love these as much as I do, 'cause they're kind of tacky, if I was to be honest about it.
But love them I do! 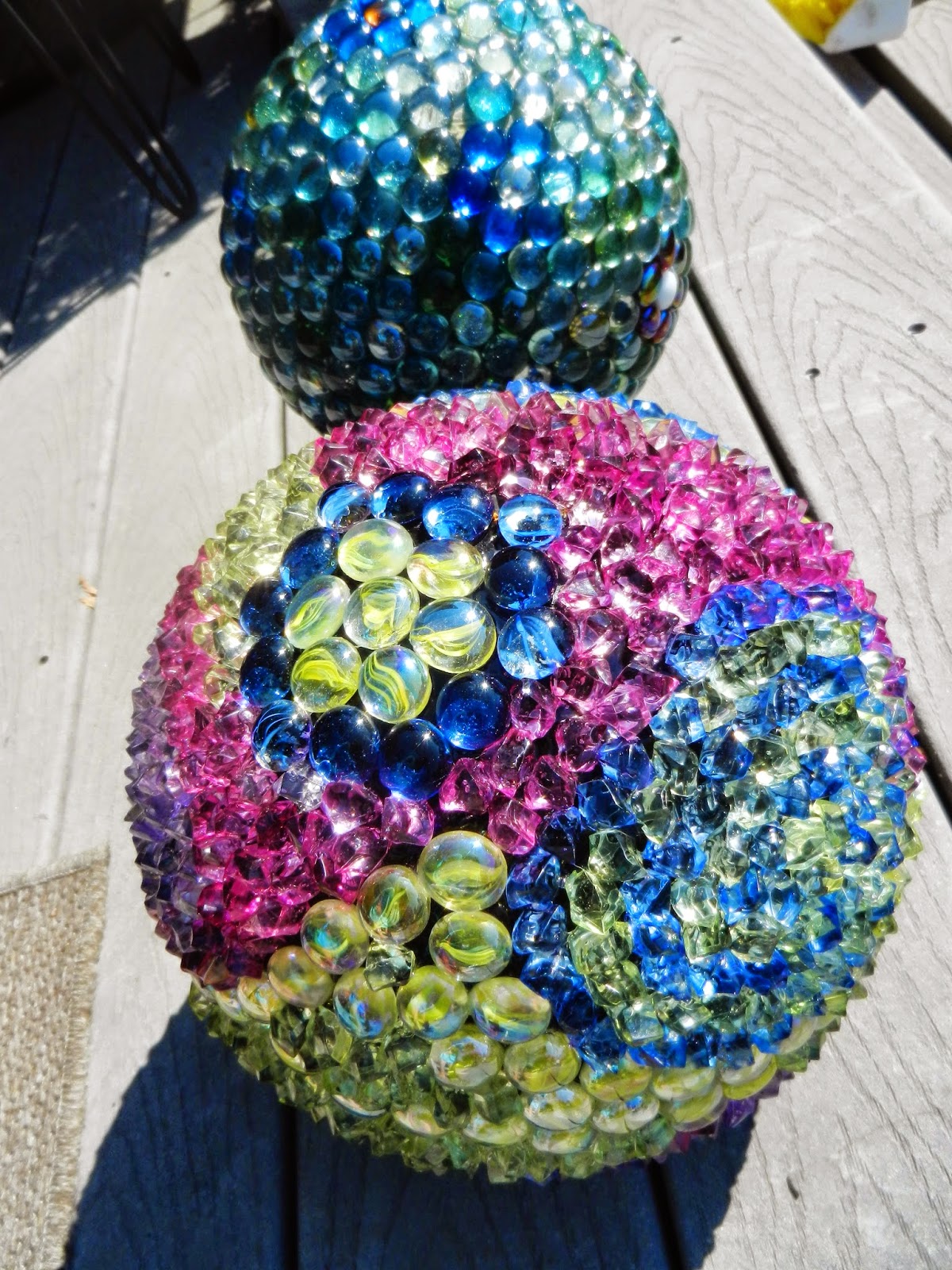 Halfway through the month, a friend called and asked me to take a chicken that had been badly injured by a wild animal who broke into the henhouse. Julie nursed her back to health, but every time she put her back with the flock they pecked her and re-opened the wounds.
So, meet Shirley.
Jeff says it's a dumb name for a chicken, but I'm pretty sure it's really her name. 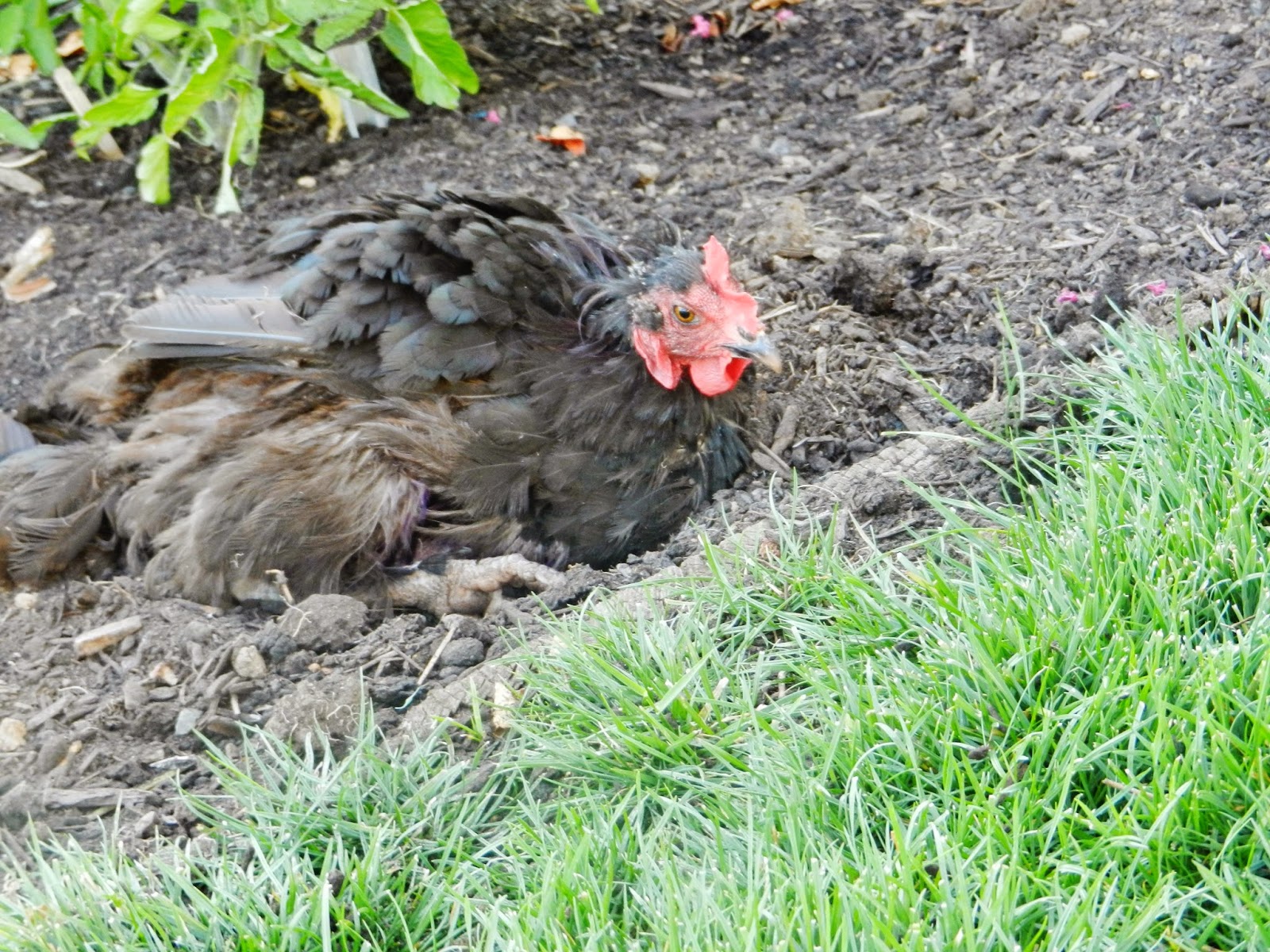 The dear bird has spent the last two weeks making a complete mess of my formerly-tidy flowerbeds. She came with a small cage, but hates it. The second night of her residence, I was out puttering around the garden and it was getting to be close to sundown. A little voice told me I should put her back in the cage, but I told it to be quiet and I would take care of it in a few minutes. By the time I looked for her again, she had disappeared and, although I spent close to an hour looking for her, was nowhere to be found. I went to bed hoping that she had found a safe place to roost, because we do get raccoons in the yard occasionally and they would love to make a meal of her. 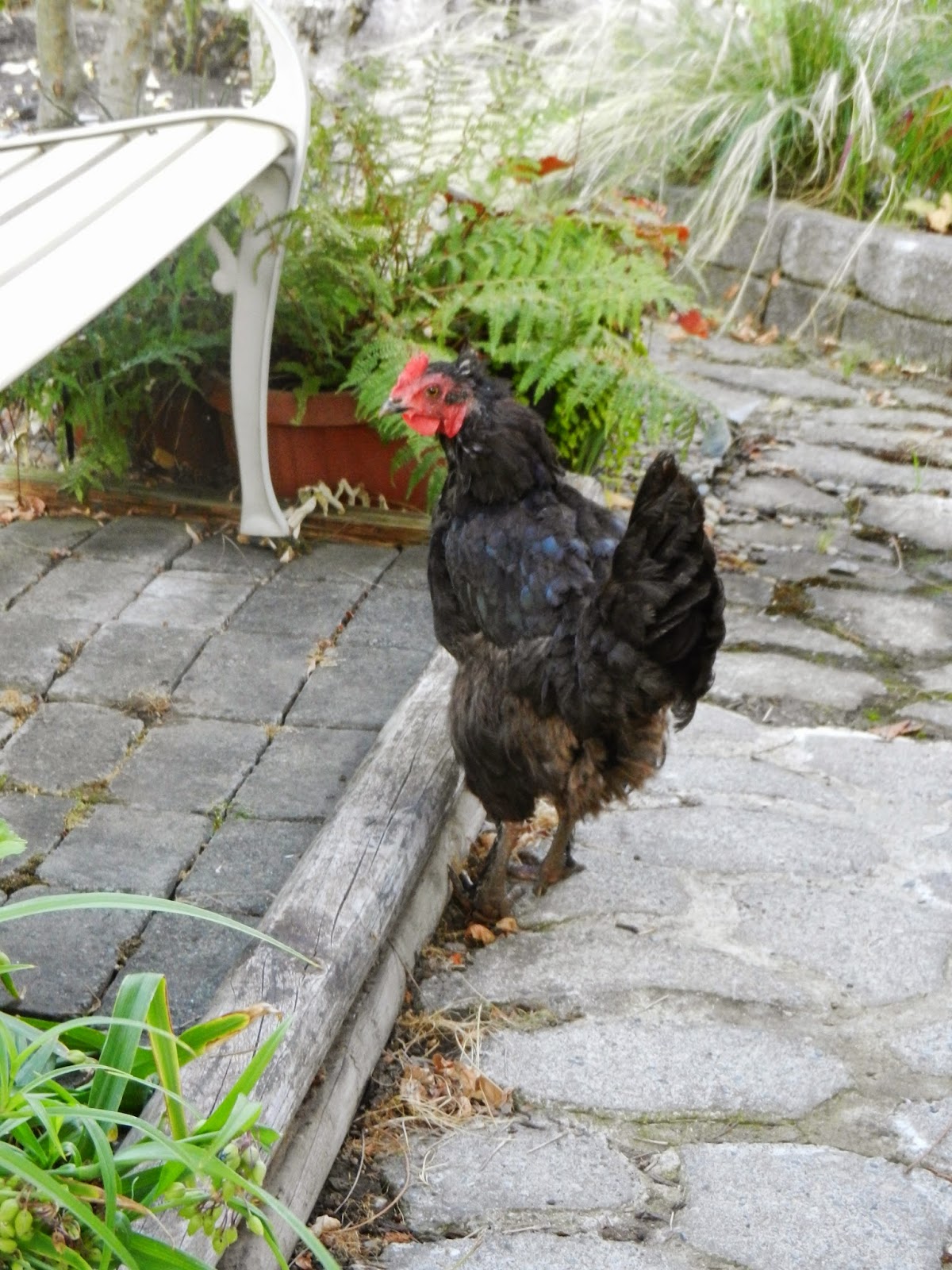 The next morning, at 6:30, I heard a gentle clucking outside the bedroom window. I still haven't figured where she spent the night.

Here she is, sheltering under a big hosta leaf from the sprinkler. 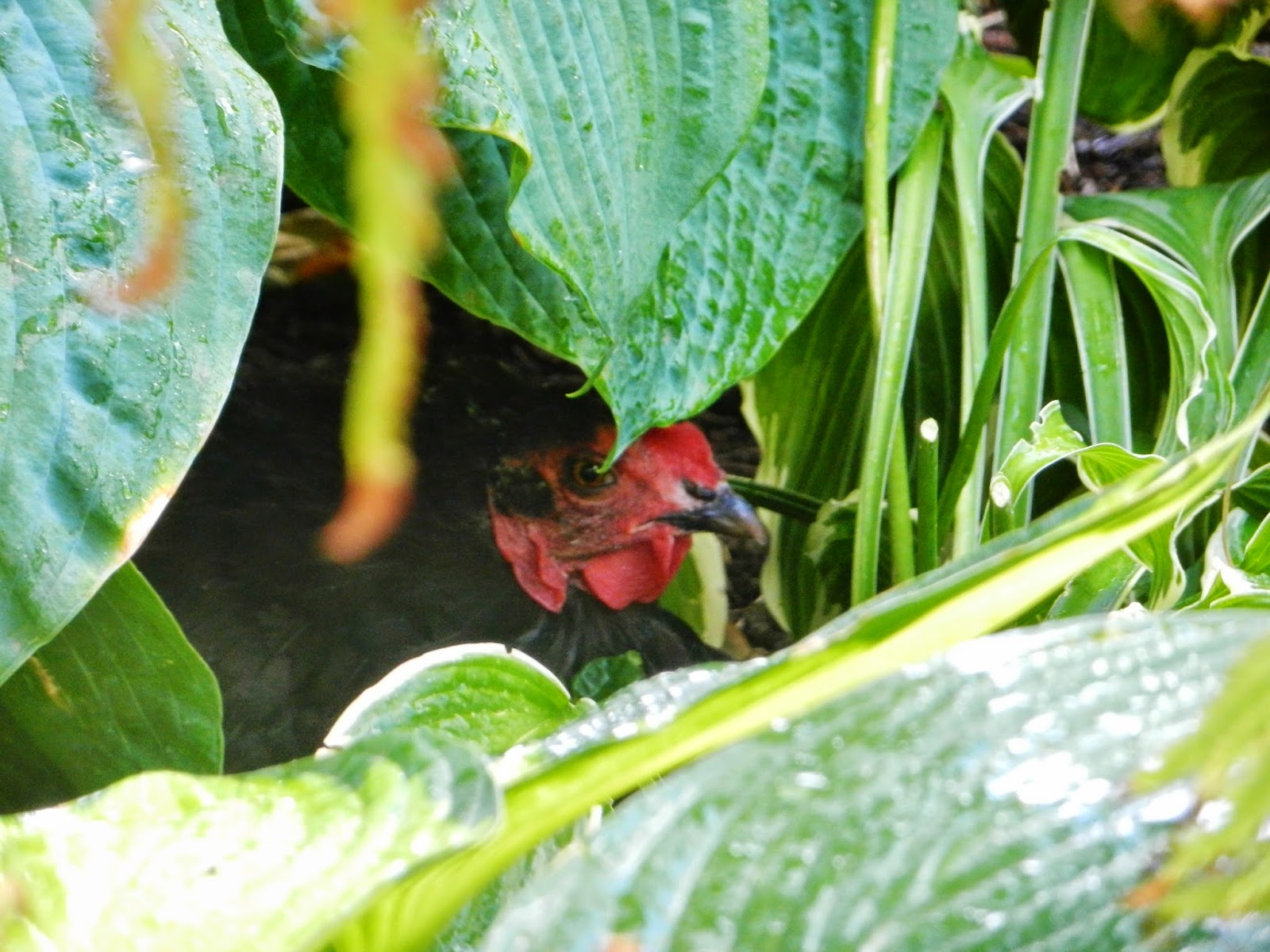 She lays one beautiful big brown egg every other day. 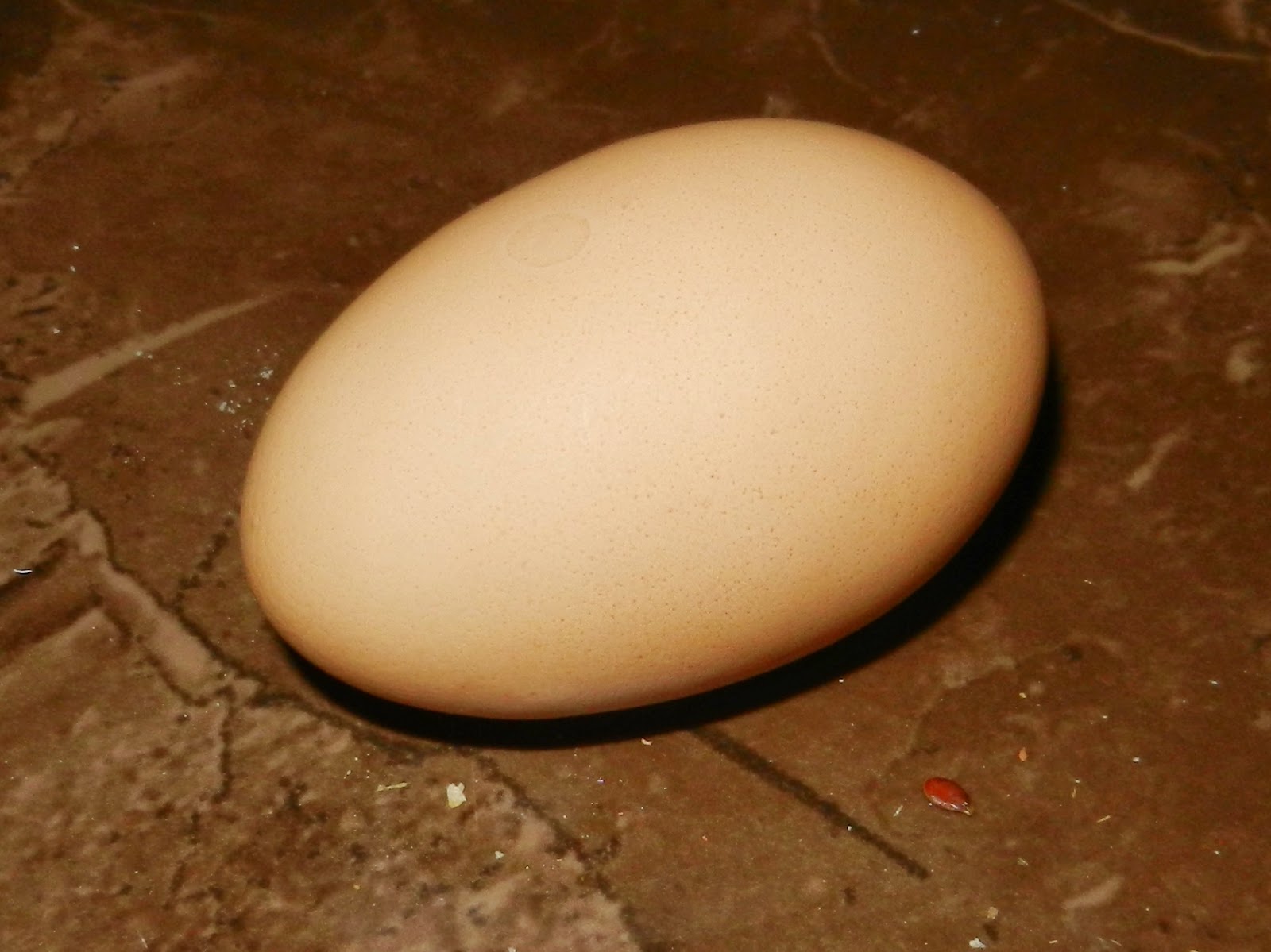 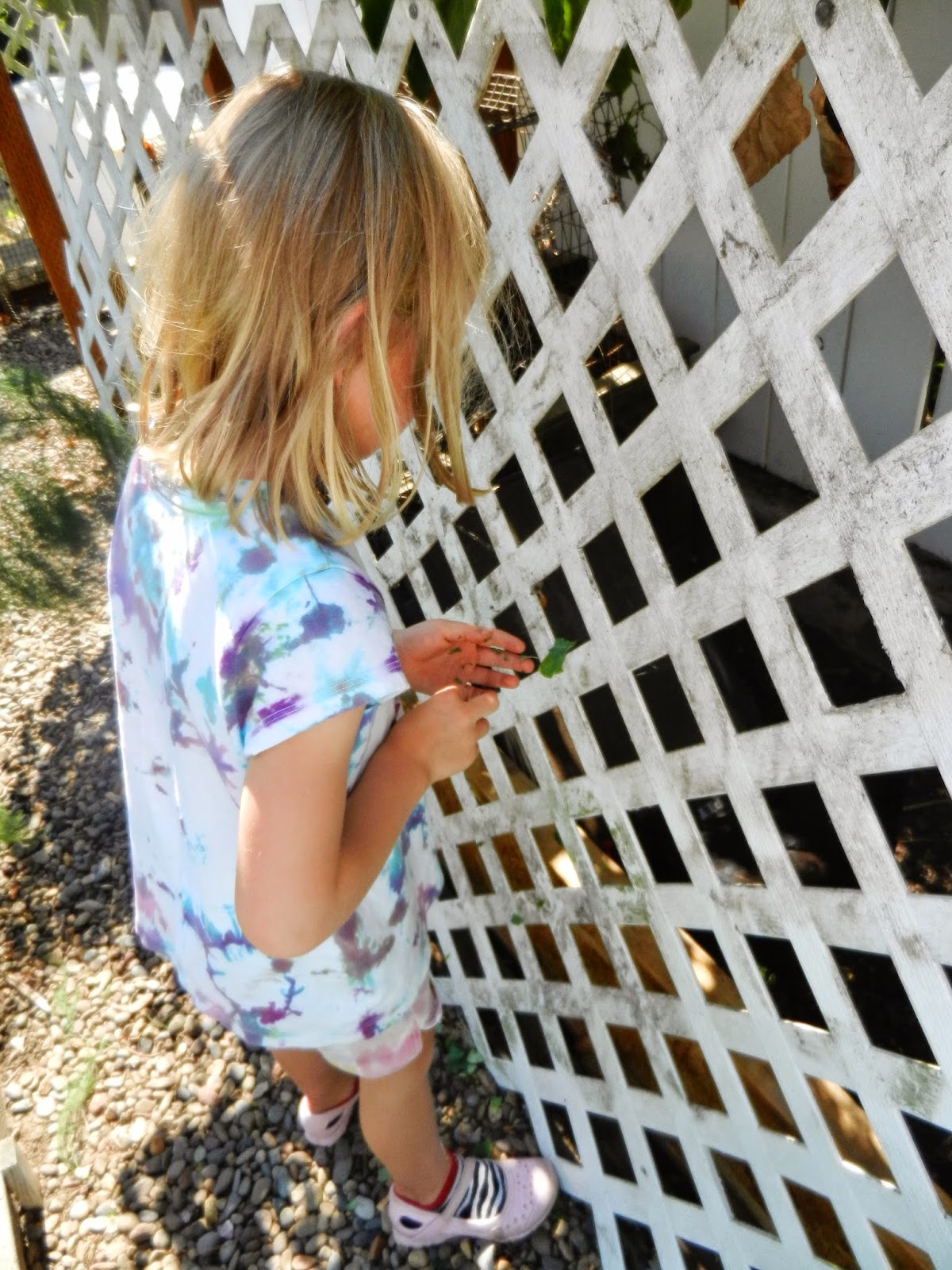 Jeff and Chris spent most of sweltering yesterday building Shirley a nice coop out of wood that I scavenged from a building site. 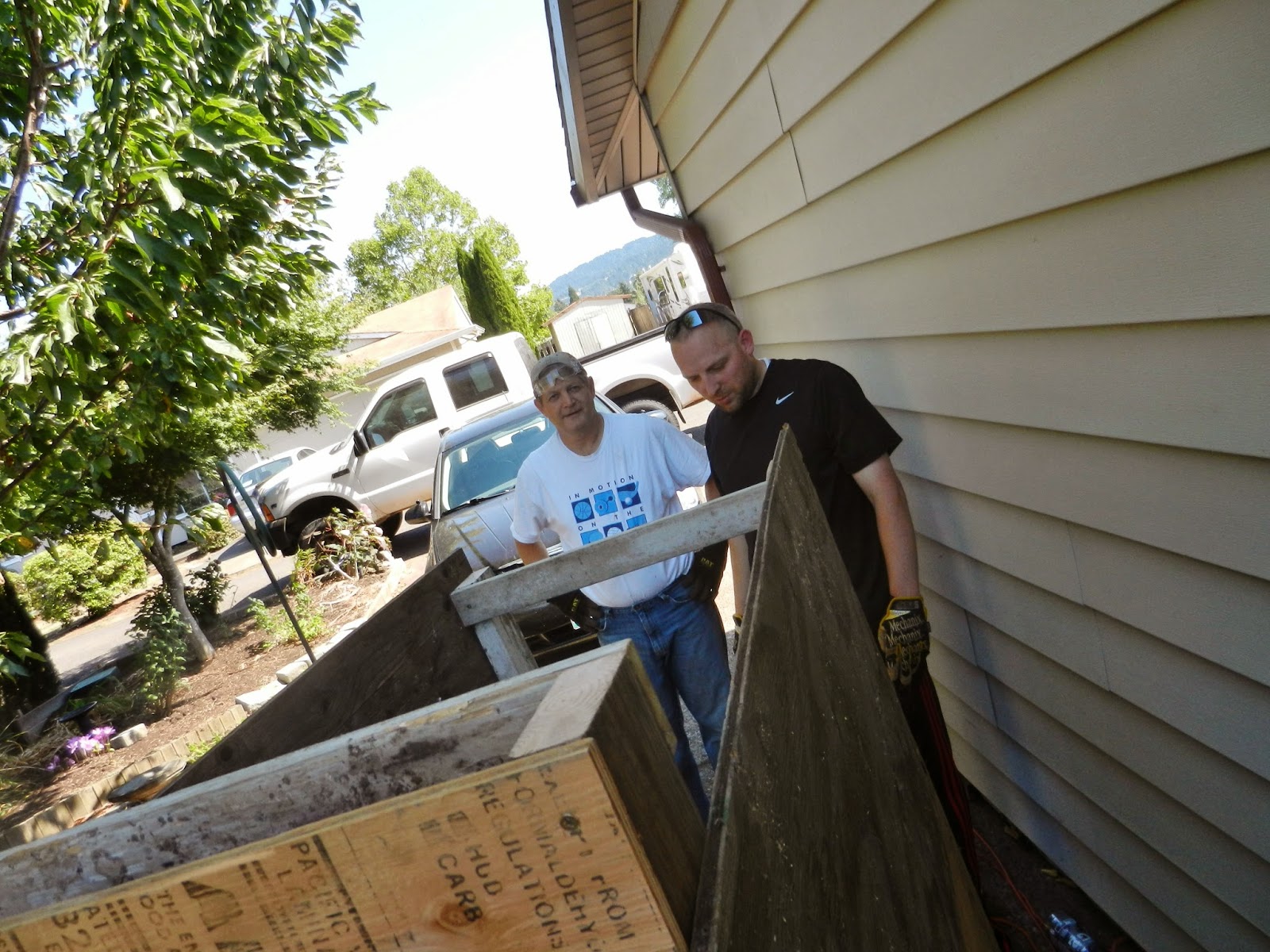 I've been roasting and canning tomatoes this week. Some of them are from my garden and some from the senior centre, where excess produce and bread is often available. It's kind of ridiculous how easy it is to get free food around here. I'm still struggling with the Tattler lids and had four jars out of fourteen that inexplicably didn't seal. And I won't elaborate on the accident that splashed boiling tomatoes onto the end of my nose which then lost a perfectly round section of skin and has been looking very weird all week. 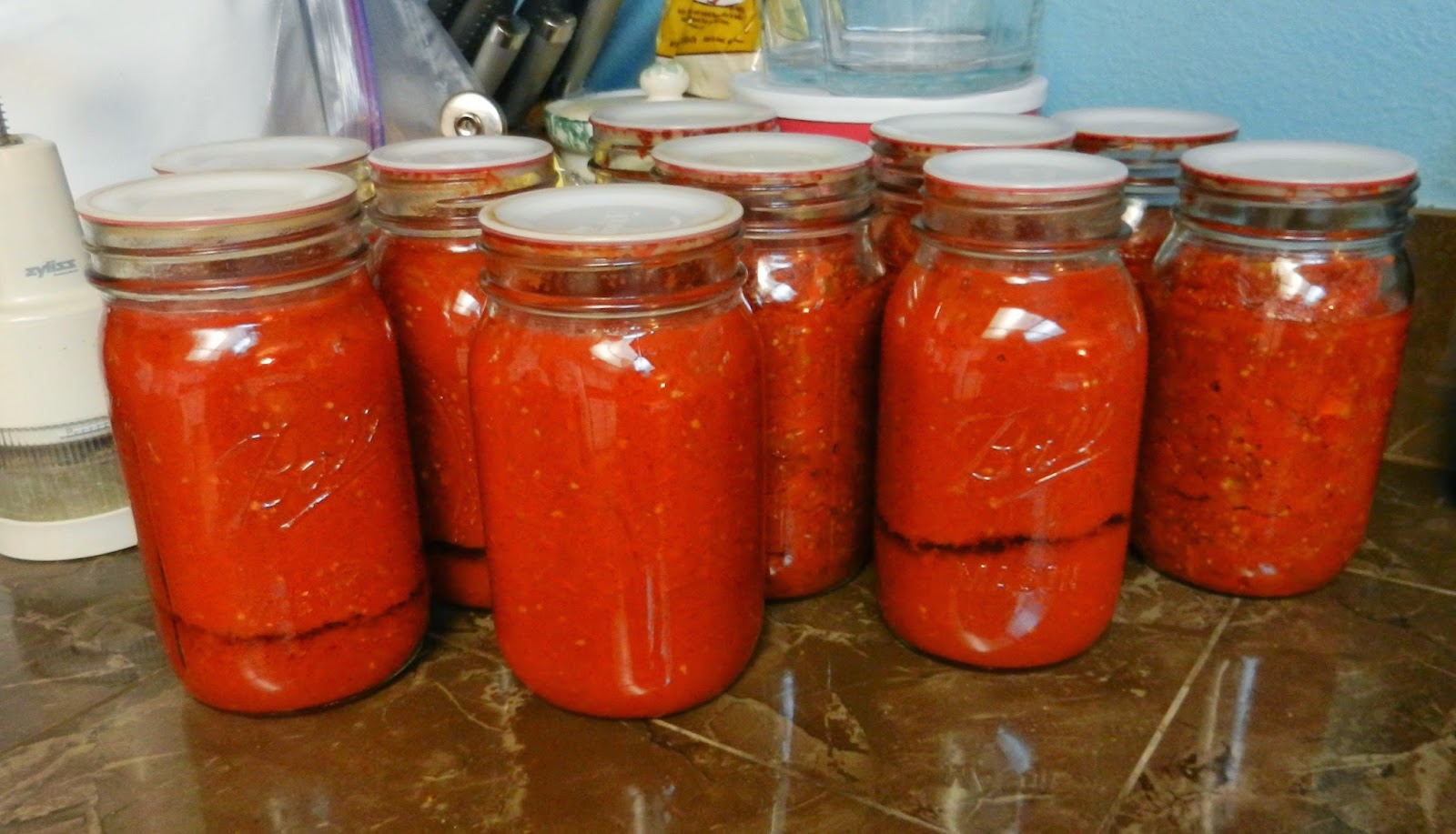 Such is my life.