A Tale from Cruising Down Under

A longish story from our cruise to New Zealand and Australia. Too long for Facebook.

One day, as I got off the lift, I saw a little old English lady walking through the lift lobby and muttering to herself. I stood there for a while, I forget what I was doing but I think I was looking at some art work or something. Pretty soon, here comes little old dear again, and this time I could hear what she was saying.

"I just can't find my room," was her refrain.


I stopped her and said, let me see if I can help you. She knew her room number but couldn't find it because a part of the corridor looked like it dead-ended at one point, but if you walked closer to it, it turned a corner. Large cruise ships can be very confusing, and this one was a giant. It's not uncommon to see very senior citizens walking the corridors in a slightly confused state when on a cruise ship!

It turns out her room was just down the corridor from ours, so I walked with her until we found her room. I suspected that she might be in early dementia, as the inability to interpret spaces is a symptom. We talked as we walked and it turned out that she was born in Birmingham, just like me, and was evacuated during the war to Cardiff in Wales, where my family visited on our summer holiday. My parents were also evacuated to the country during the war. Her husband had died a few months earlier and her daughter persuaded her to take this cruise. She had a couple of friends that were also on the cruise but she was alone in her room. Not, I thought to myself, an ideal situation for someone so confused.

Anyway, she told me that she liked to go by Eva, although her name was really Enid, which she despised. Her husband's name was Ray, and I nearly flipped because Enid and Ray were our well-loved neighbours in Alvechurch when I was a child. What are the odds? So from then on I called her Enid!

After I left Enid I went to our room and worriedly told Jeff about her. I decided to go and check on her after our outing the next day, which I did. She remembered me when I knocked on her door and was happy to see me and invited me in for a chat. She was so funny and could talk up a storm, but the delightful thing was that she knew she was a chatterbox and made jokes about it. She was a bit shaken up because she had fallen when going down the steep ramp to the quay that morning. She had forged ahead with her tour but by lunchtime she was feeling pain and headed back to the ship for a rest. The cruise people took her to the on-board doctor, who checked her out for broken bones and  and gave her about four Naproxen for the pain.

Four pain pills! I said. How ridiculous was that? I had my own supply of Naproxen with me because of plantar fasciitis pain so I offered to give her some of mine. I also told her to double the dose the doctor told her to take, because I know about these things! I told her if she was in pain and needed them, call me and I will bring her some. She told me all about her life, we laughed a lot, and then we parted ways.

A few days later, Enid called me and wanted more pills, so I gave them to her and then made a point of knocking on her door periodically to see how she was doing. We had many delightful talks. She is a great, brave, optimistic soul and I loved her. I introduced her to Anne, and here we are. It was mystical how many different ways our lives had intersected. We felt like soul sisters! 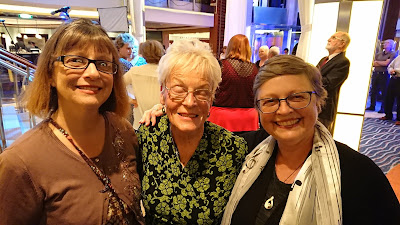