A brief musical history. Of me.

Sometimes, when I tell my piano students that I have been playing the piano for over fifty years, I wonder how that can be possible. I see astonishment, awe, and sometimes a complete lack of understanding in their eyes as they try to assimilate that fact. And it makes me laugh.

I began taking piano lessons at the age of eight, and I think it was just because Dad decided I should. I really wanted to be a ballerina and ride horses, but I took to the idea and it changed my life. Not in the way people use the phrase these days, like when they find a new cookie recipe or a new pair of shoes. It really did play a big role in how my life went from then on. Dad told me that if I learned to play the piano I would always be popular. I don't think he meant "popular" in the high school sense of the word, but that I would make friends through it, and that has certainly been true.

I don't remember my first piano teacher's name, but she was a nice elderly lady and I enjoyed my lessons and playing the piano at home. I was very excited when I got to the point that I was playing two notes at the same time and I distinctly remember asking Mum and Dad to come and watch me do it.

I can picture her house and even the garden, as Dad must have done some bartering of plumbing work for piano lessons and he took Anne and me with him and we played in the garden while he worked. My teacher lived in Badsey, which was only three miles from our house in North Littleton. The piano/sitting room was the first door on the left as you entered through the front door and went down the hallway. The room was very cold in the winter and I am pretty sure my teacher must have had an electric heater going, but it didn't help much. For a long time I thought she had a gurgly stomach, but then one day I realised she had a hot water bottle on her lap!

I studied for the piano and theory exams of the Trinity College of Music and sat one exam of each every year. We used to have to drive to Cheltenham, which was about 20 miles away. I always got good marks in the exams but my knees used to shake something terrible when I sat the practical exams. It was just the examiner and me in a room together. I played my pieces and he sat and wrote comments and graded me. It was very scary. I always loved the theory exams, they were much less pressure and I just enjoyed my theory. I loved to play Strauss waltzes.

When we moved to New Zealand, Dad found me a new piano teacher. Her name was Dame Ella Hall and she had been a famous concert pianist in Europe in her heyday. When I knew her she was in her eighties and I think she had early dementia. She wouldn't remember anything from one week to the next and I quickly learned that if I forgot my list I could get away with anything. She was still a good teacher though! When I started high school at CCNZ, I began taking lesson from her daughter, Dolores Hall, who taught me for the next five years. She kind of doted on me and I got by with a minimal amount of practice. She always told me that I could play with feeling, unlike the students of the other teacher at the school. She was being a bit snotty. I enjoyed playing the piano during those years and learned to play hymns for seminary class and also played for school assemblies and choirs. I loved to play songs like The Entertainer and pop songs. When I practised classical songs at home, Dad would often yell out, Why don't you play something we all know? He bought Lily of Laguna for me to learn, as it was his favourite song. I still have the sheet music. It is very politically incorrect. Here it is if you want to sing along.

Oh, well, that one only has the innocuous chorus. The original lyrics are here, if you want to scorch your eyeballs. It was written in 1898 by a British composer and was performed by blackface performers, who were very popular in England for many years. I remember watching them on the telly as a child. As time went by, the racist lyrics were stripped out of it until it became a mostly innocent love song.

I started an organ class at school but quit after a few weeks, I don't remember why. But I was called to play the piano for Sacrament Meeting when I was about 17 and I did it happily. One day, a member of the Bishopric came up to me and said, Why don't you just play the organ today? So I did. I made a right mess of it because it takes such different technique and I hadn't played it for a while. Dad got up to speak and said something about not knowing that I could play the organ, and apparently I really couldn't. I was mortified, but it was his way of being funny. But from then on I became an organist too, although as the years went by I quit attempting to use the pedals and just made up for it by using plenty of 16' stops.

I kept taking exams until 6th form. I was supposed to take the last level but I hadn't really practised diligently and was unprepared at the end of the year. Luckily, I got appendicitis and was in the hospital when I was supposed to be sitting the exam, so I didn't have to take it. Saved by a faulty appendix! I also took music theory during all five years of high school.

I continued to play for ward choirs and church and various other groups over the next few years. One of my missionary companions, Sister Barrott, also played the piano and we had a grand time playing duets together. I took lessons when I was pregnant with Jonnie and we spent some of our precious income on a used piano. I loved taking lessons from my teacher at Santa Ana College. I was taking a Music History class and the lessons came free with the programme. I felt like I learned a lot from that teacher, including how to play Chopin. He also commented to Jeff that I played with a lot of expression. After Jonnie was born I would take him to my lessons and the teacher would rock his little infant seat with his foot to keep him quiet.

I think back on all of the experiences I've had because of my ability to play the piano. I have played for weddings and funerals and even a party or two. I've accompanied many magnificent singers. I haven't been an exceptional piano player, not having the urge of a true artist, but I've managed to disguise the fact quite well for a long time! When I was working on my music therapy degree in my forties, I once again took lessons and this time I think I improved my talent more than all of the other times taking instruction. I loved the feeling of progression in my playing and played some pretty challenging music, as well as memorizing more than I had ever done before.

I started teaching a few students over thirty years ago. I have been trying to remember all of the people that I have taught over the years and the list is up to about 130, but I am sure there are more. Some only stayed with me a few weeks, some for years. None of my students have become concert pianists, but I think most of them learned to appreciate music. I taught my four kids to play the piano, with varying degrees of success, and now my grandkids. I love to see how music is such an integral part of their lives. It has been a long and winding journey, always challenging and mostly satisfying. Some days I still find myself leaving the music room at the end of teaching and doing a primal scream in the kitchen, but those days are in the minority. I am a lucky woman.

It turns out my dad was right: my life has been greatly enriched by all of the people that I have known because of this one simple fact.

I am a pianist. 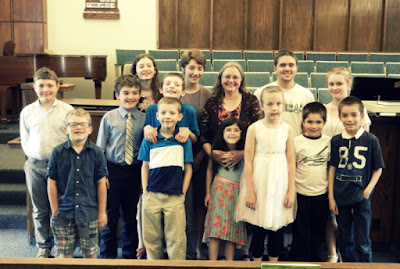 My piano students after their piano recitals in May 2015. 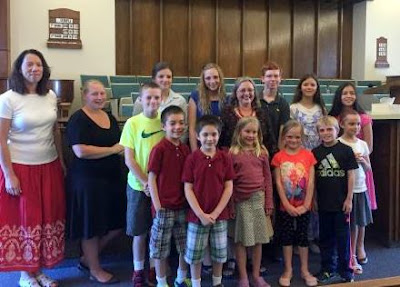