My first view of Scotland was breathtaking. It was through the window of our Icelandair Boeing 757 and the veil of grittiness in my eyes from watching movies all night. 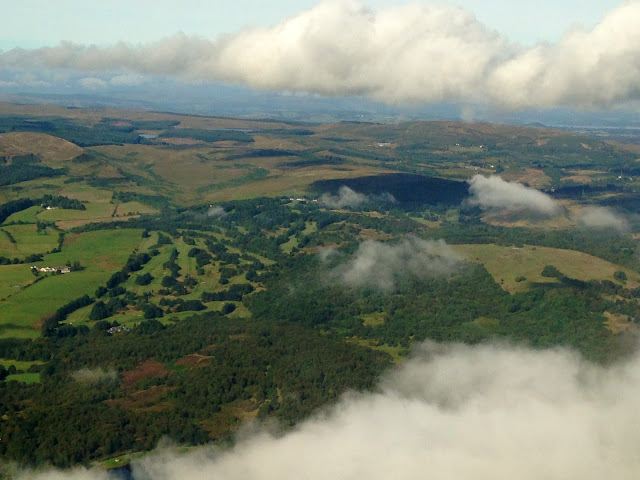 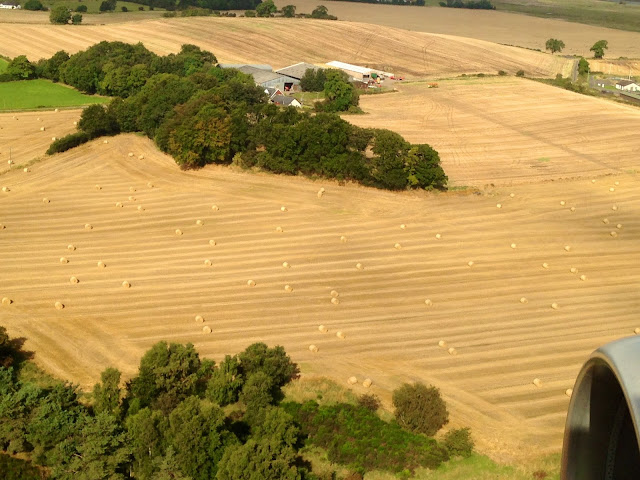 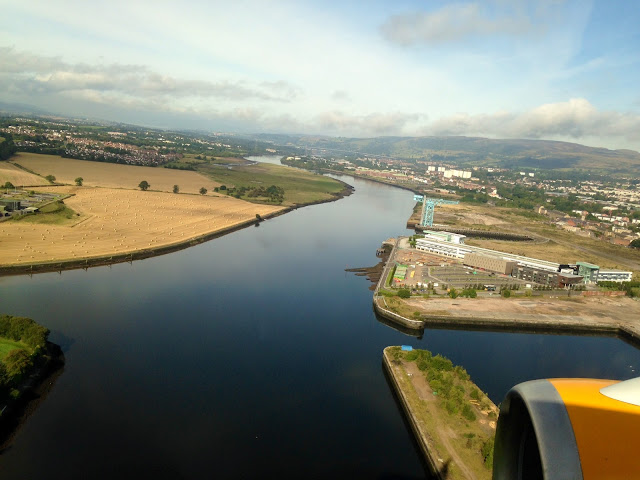 I loved Glasgow airport, it's not too big and customs was easy-peasy. As in, do you have anything to declare? No? Off you go then!
But drama happens.
In the weeks before we left on this trip, I spent countless hours preparing a folder containing a detailed itinerary, tickets to various attractions, receipts, and maps. I had rented a little Fiat 500 from Europcar through a third party company called Auto Europe and I had double-checked that everything was covered in the rental price, including insurance, because we had been taken by surprise by added charges in previous travels. Imagine my horror when the lady behind the Europcar desk refused to let me take the car unless I paid twenty pounds a day for insurance coverage. That would have more than doubled the cost of the car. It took about 30 minutes on the phone to Auto Europe to find out that for an extra $30 we could be fully covered by them for the whole trip. Win for me, especially considering that I managed to remain polite to the Europcar person throughout the encounter.
And.
This was the car we paid for:

And this was the car we got. It might look the same, but it's a Kia diesel and has four doors. It is still very maneuverable and easy to park. We have decided that we probably wouldn't have fit our luggage in the back of the Fiat. 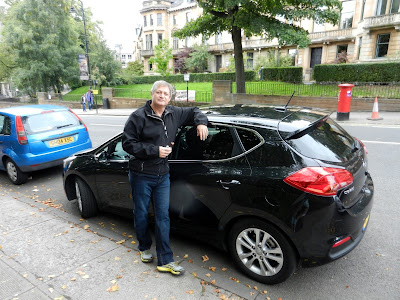 It was an uncertain day weather-wise, which, as we have learned, is the norm in Scotland and northern England.
If you don't know, I always drive when we travel to countries where driving is on the left side of the road. It was how I learned to drive so, theoretically, it comes back to me fairly easily. So here I was, twenty-four hours without sleep, driving on the wrong side of the road with a manual gear shift, getting lost every time we got to a roundabout because Jeff was trying to navigate for me using my Mapquest printouts and failing miserably, trying to decipher all of the unfamiliar road signs in a city that does its best to hide street names on the sides of the buildings, and having small and frequent moments of panic. It was with much joy that the person who was renting her flat to us through airbnb was able to talk us (over the phone) into her road. It was with great gratitude that I parked the car in a very small space between two other cars.
This street, known as Pollockshaws, was a short walk from the flat and later we found a wonderful organic bakery and several good restaurants on it. 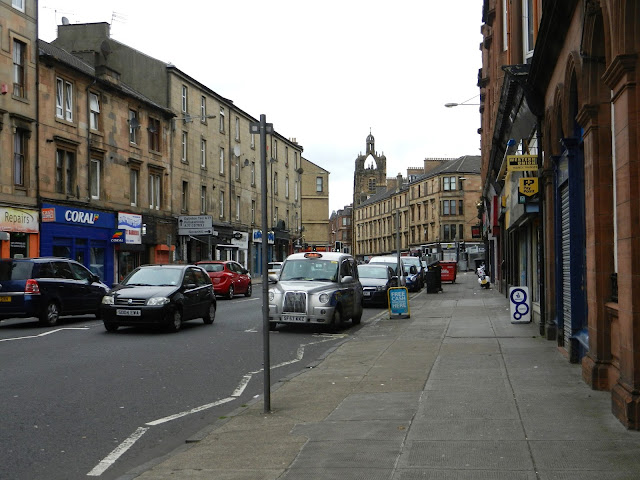 We took a short nap and then I dared to take to the streets again. We visited the Botanic Gardens and, it being Saturday, lots of families were out taking in some fresh air and enjoying the gardens. 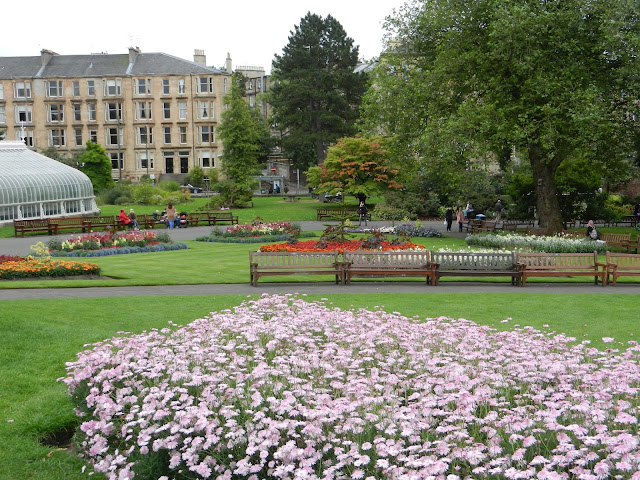 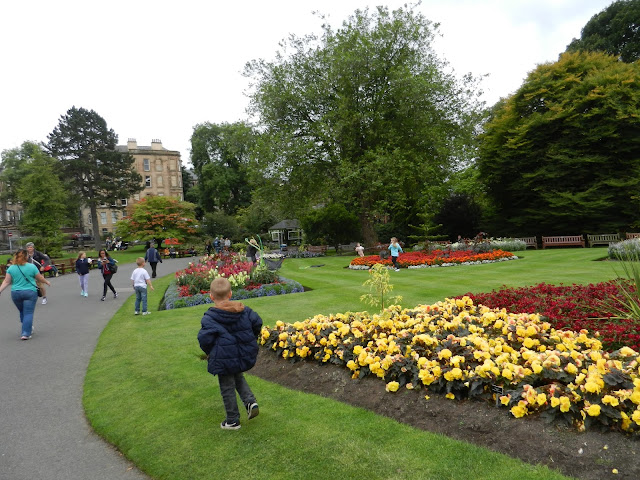 We have been to better botanical gardens, but the greenhouses were pretty spectacular. There was a whole chain of greenhouses attached to each other, all with different themes. I found a little bit of New Zealand in one of them. 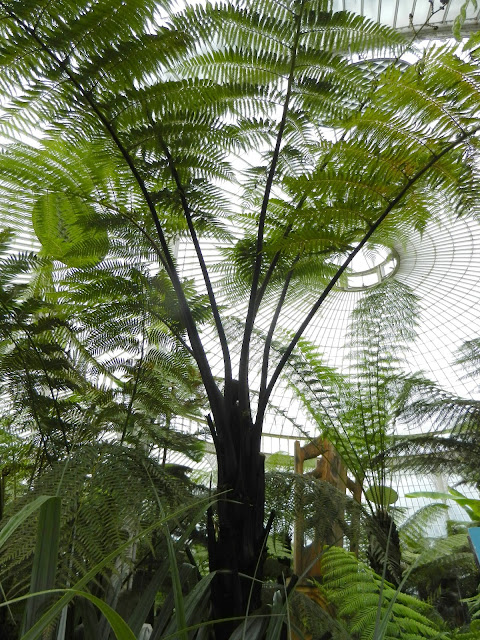 And these pitcher plants were in the "killer plants" greenhouse, which was the best show of carnivorous plants I've ever seen. 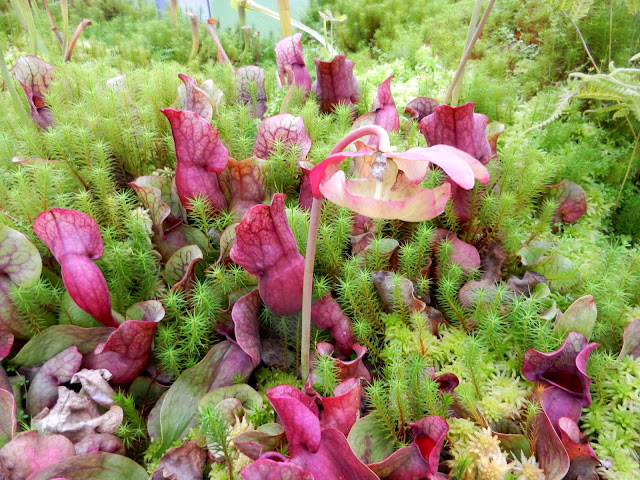 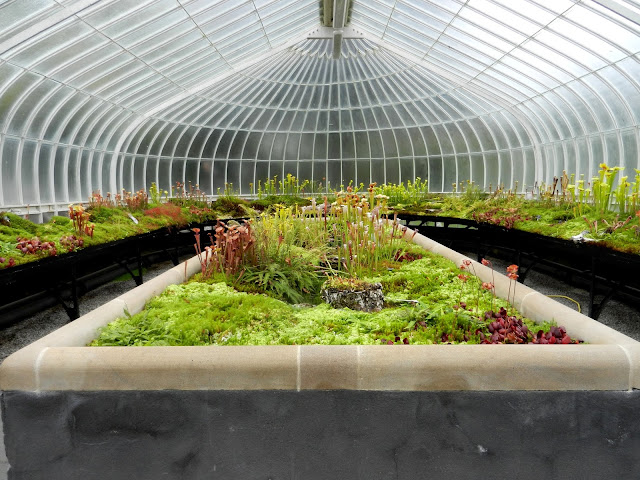 Proof that we were there. 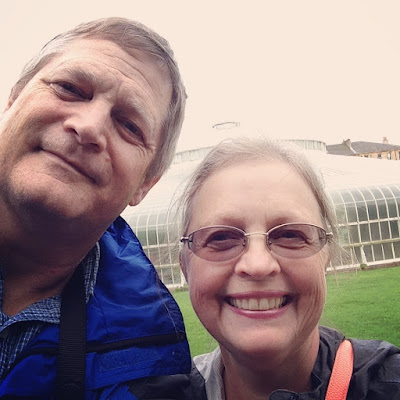 On the way back to where we had parked the car, we heard bagpipes.
Bagpipes are like honey to our ears, so we followed the sound to this school. 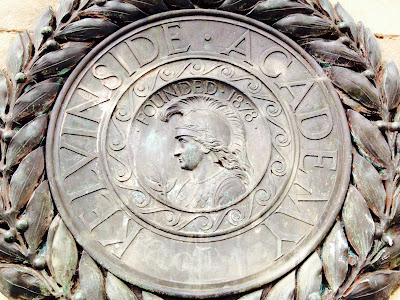 And this young man was piping his heart out by the front door. I think it was a back-to-school night or some such thing. He gave Jeff permission to take his photo. 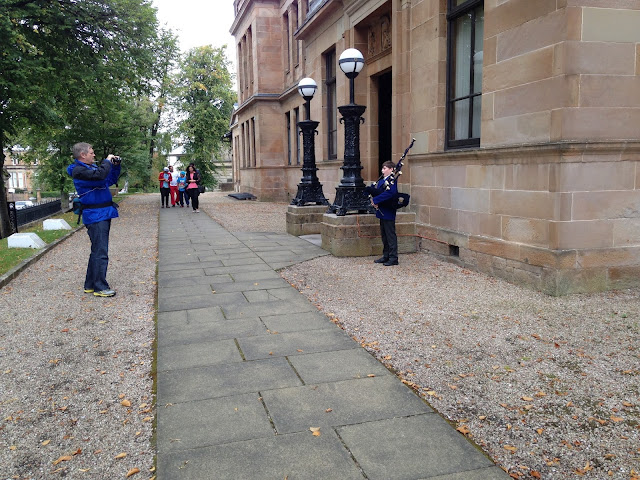 We drove back to Torrisdale Street and ate dinner at Buddy's BBQ and Burgers, where I ate poutine for the first time. It was delicious, and there was enough for dinner the next night. Jeff had a burger. Of course.
I had pre-paid for tickets that evening to the Scottish Fiddle Orchestra, which was to be at the Royal Glasgow Concert Hall in the middle of downtown Glasgow. We nixed the car and took the train into downtown. The station was just across the wall from the flat, so it was a short walk on that end. Which was just as well, because after the five-minute train ride, we couldn't seem to get our bearings in the downtown area and find the concert hall. Most people that we asked didn't know where it was, and the ones that gave us directions were wrong. After walking hither and yon for about 30 minutes we finally arrived, hot and sweaty, just in the nick of time.
It was a perfect concert, the audience was well-behaved, and the icing on the cake was that Princess Anne, who is the royal patron of the orchestra, was attending the concert. My first time ever in the presence of royalty! I'm not much of a royalty-chaser, but I like Anne for several reasons. She is thrifty, and actually wears outfits more than once. This website has an interesting look at some of them. She is patron to over 200 organizations and carries out over 700 royal engagements and public appearances every year. She has been known to be grumpy in public, but also has a sense of humour. Apparently, she hasn't changed her hairstyle in several decades. What's not to like, I say. This is a fun little article about her.
But I digress.
Many of the numbers were foot-stomping and hand-clapping kinds of songs. Some were sentimental melodies and I'm pretty sure the old gentleman next to me wiped tears from his eyes a time or two. A mezzo-soprano and a tenor joined the orchestra for some songs. But the best part was when the First Troon Boys Brigade Piper Band joined in.
The photos stink, but I have included a YouTube video of the two performing together a few years ago. 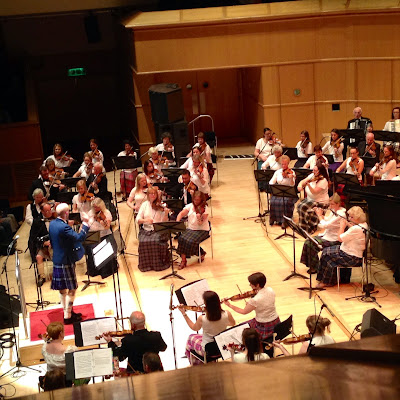 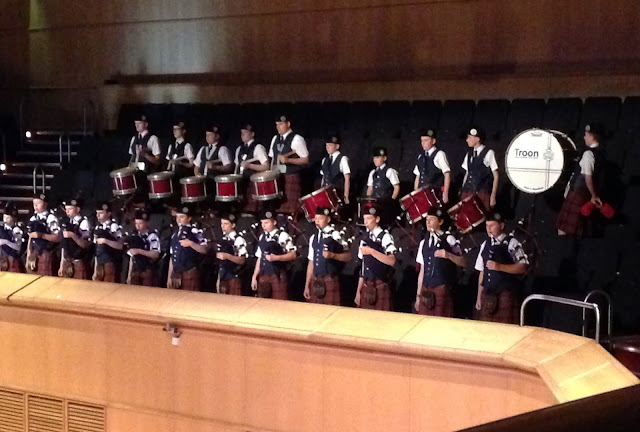 There were six piano accordions in the back row.
And two Scottish dancing sisters.
And sometimes the accent of the announcer was so broad that we couldn't understand a word he was saying. But we understood most of this poem when he recited it from memory:

McAllister Dances Before the King

Clansmen, the peats are burning bright,
Sit round them in a ring.
And I will tell of that great night
I danced before the king.
For as a dancer in my youth,
So great was my renown,
The king himself invited me,
To visit London town.
My brand new presentation kilt
And ornaments I wore;
And with my skein dhu,
I rapped upon the door.
Soon I heard a Lord or Duke
Come running down the stairs,
And to the keyhole put his mouth,
Demanding who was there!
"Open the door!" I sternly cried,
"As quickly as you can.
Is this the way that you receive
A Scottish gentleman?"
The door was opened; word went round,
"McAllister is here."
And with the news, the palace rang
With one tremendous cheer.
The King was sitting on his throne,
But down the steps he came.
Immediately the waiting Lord
Pronounced my magic name.
And all the ladies of the court
With pearls and jewels bedecked,
Did blush and tremble as I bowed
To them with due respect.
Slowly at first, with hands on hips,
I danced with ease and grace.
Then raised my hands above my head
And swifter grew my pace.
At last no human eye could see
My step so light and quick.
And from the floor great clouds of dust
Came rising fast and thick.
The Kind was greatly moved and shook
My hand in friendship true.
"Alas," he said, "Although a king,
I cannot dance like you."
And the the gracious Queen herself
Came shyly o'er to me,
And pinned a medal on my breast
For everyone to see.
Her whisper I shall ne'er forget,
Nor how her eyes grew dim.
"Ach, where were you, McAllister,
The day I married him!"

But the best part was Auld Lang Syne at the end when the whole audience crossed arms and held hands and sang along. It was a fitting finale.
One curious thing was that no one gave a standing ovation at the end. I have often thought that audiences in the US have devalued standing ovations by giving them too readily, when one should be reserved for a special honour after an outstanding performance. This audience of reserved Scottish men and women were obviously beyond moved by the performance, but only stood to sing the final song. I tend to relate to that reserve even now, after living most of my life outside of the UK.

And one final photo of the railway station as we waited for our late train.
There's something that I really like about railway stations late at night. 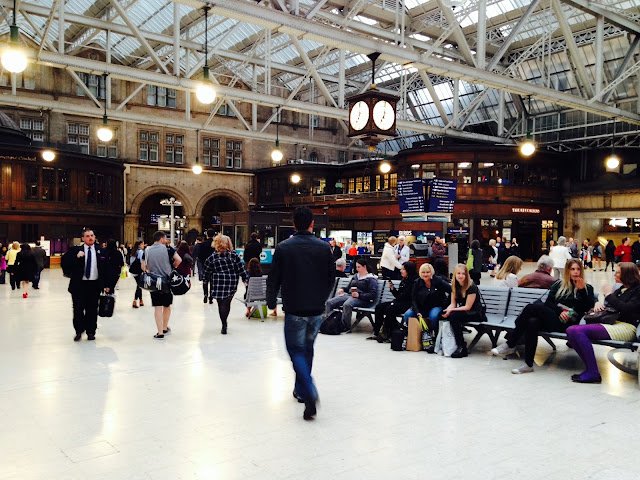