We had an optimistic plan to participate in a 9-mile hike starting near to Brigsteer, but this was probably the more ambitious plan to go astray of the whole trip. Jeff had been dealing with some aches and pains in his legs and didn't feel up to that long of a hike. Plus, we had been driving many miles and seeing many sights for the last few days, so we decided to take a slow day.
I loved Brigsteer so much, a little village with absolutely nothing going on! I kept raving about it to our host and I think he considered me to be a bit lunatic. Mind you, Jeff and I decided that he is a loner who privately hates having guests in his house but pretends to like them because of the small fortune he makes from airbnb fees and the sale of his pottery. He was pleasant enough, but plainly enjoys living on his own. This was the second-most expensive rental of the trip.
On Thursday morning, having already nixed the more energetic plan, we took a leisurely breakfast which made our host late for his doctor's appointment. Which wasn't my fault, because if he had told us that he was on a tight schedule I would have gotten ready earlier. I had bought some pottery from him and spent an hour the night before trying to get Paypal to cooperate. It wouldn't, in spite of my cajoling and complaining to several customer no-service types. And I didn't have enough cash. So we drove up to Kendal after breakfast (and after we took a walk around the village) to change some US dollars. These photos are from the walk.
But first, an able demonstration of the thickness of the walls of the cottage. 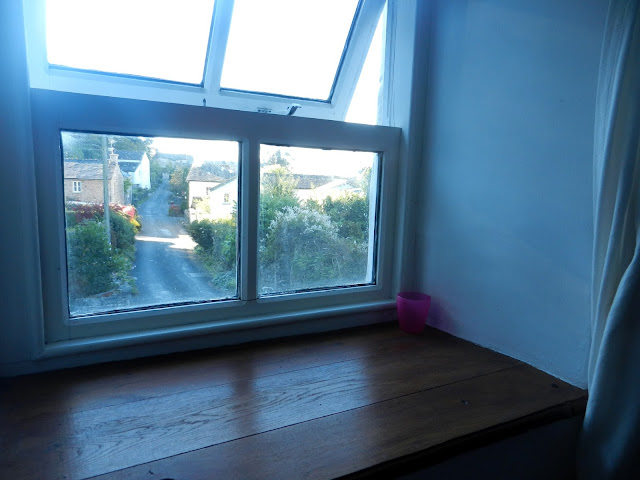 Now, the walk. The roads are barely wide enough for one car.
This is the cottage, with our rental car in the foreground. 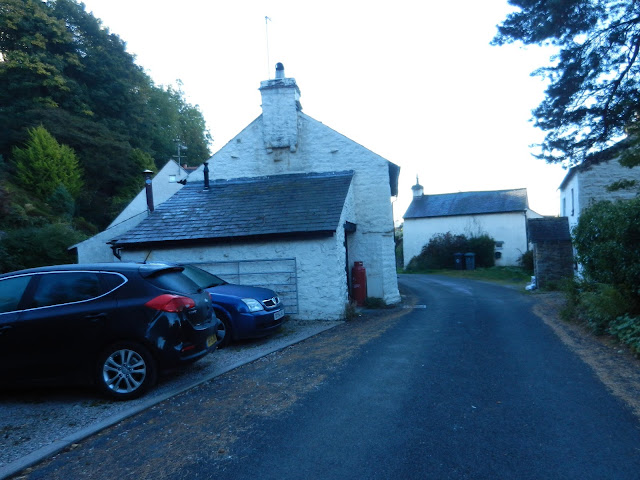 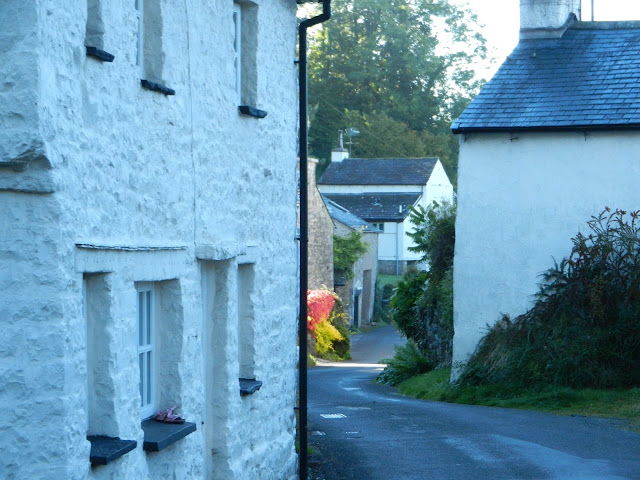 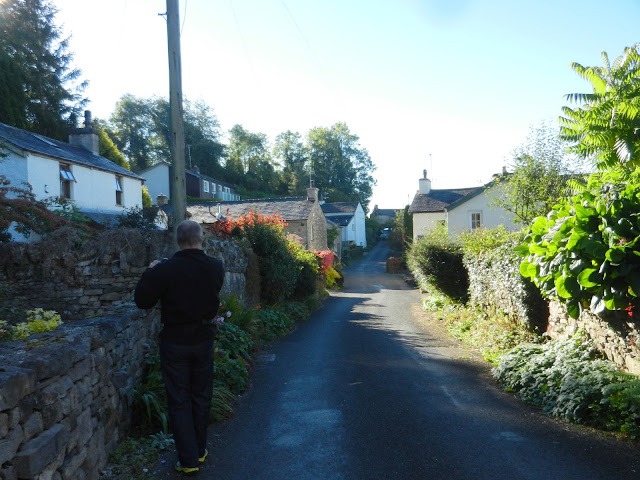 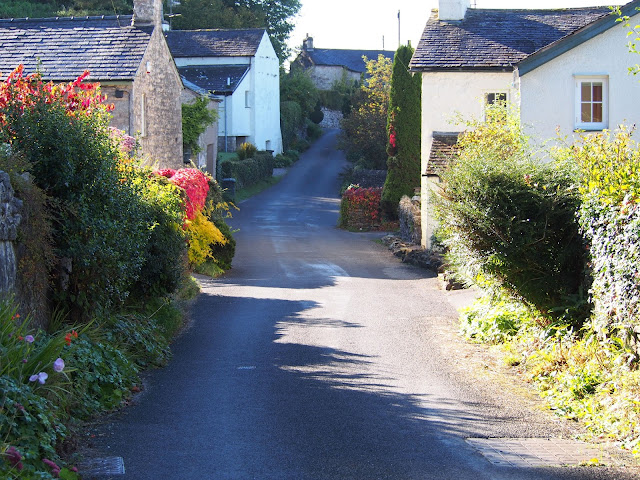 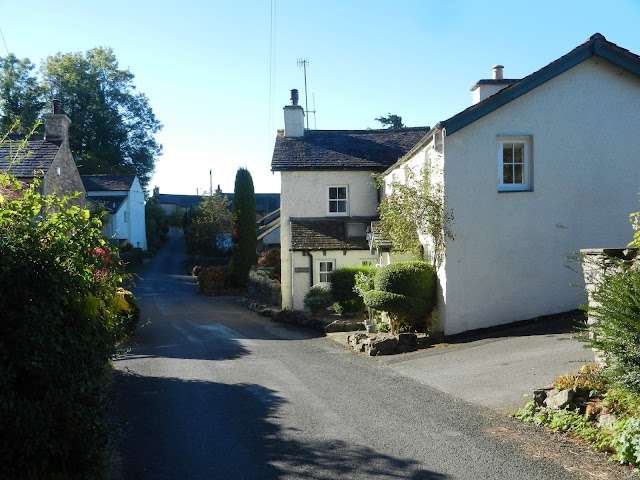 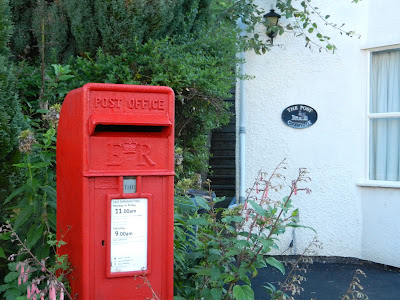 The houses are all nestled impossibly up against the hillside. 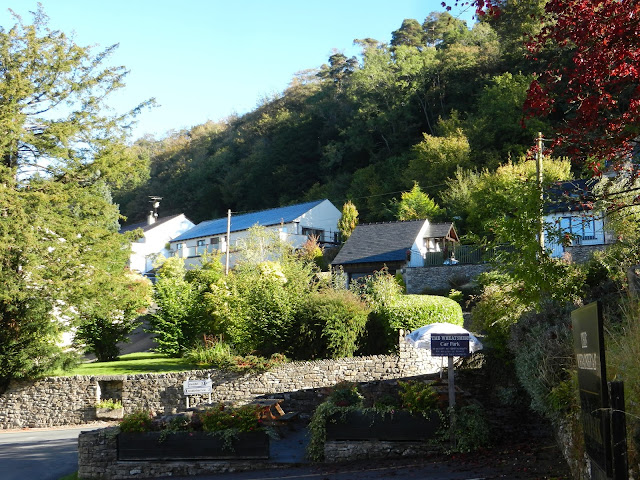 The village has an inn. 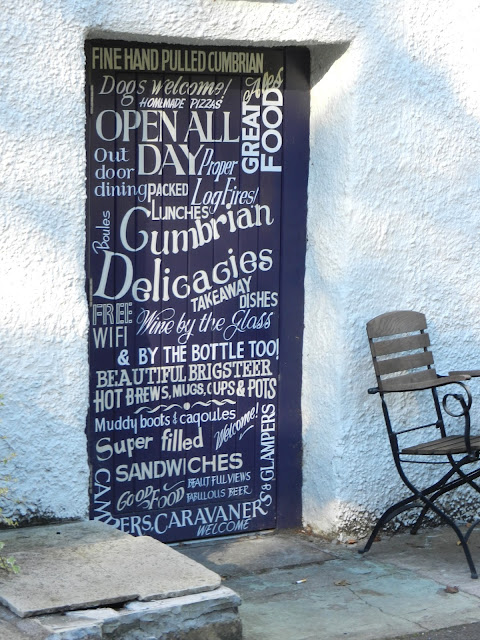 And a bus stop, for the infrequent bus service. 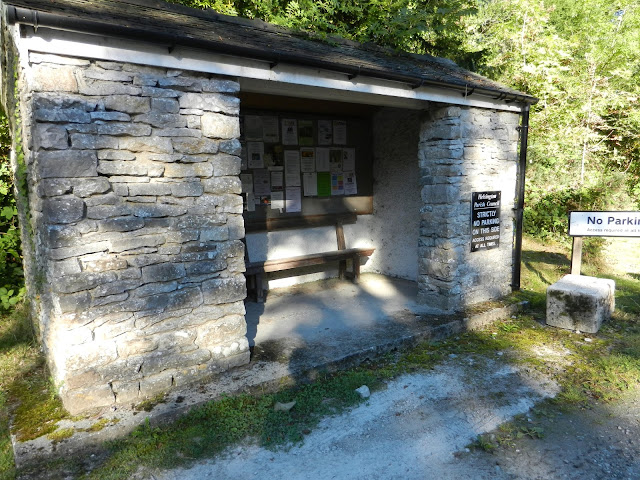 There were a few houses for sale and I drooled, but they don't come cheap. I found this lovely thing on a real estate site and it is 335,000 pounds. I could live in it. 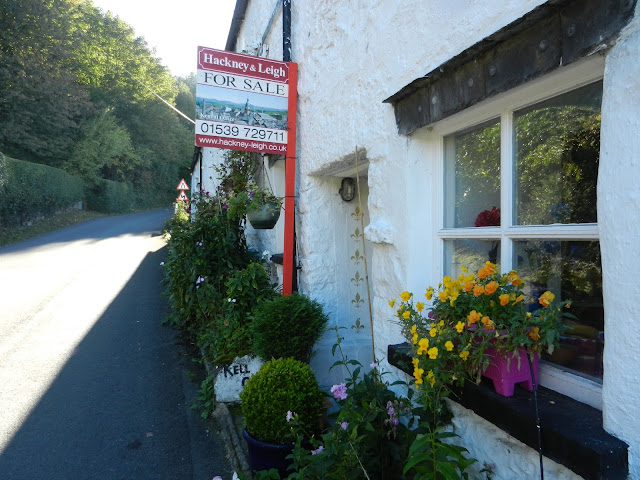 This view is ubiquitous in the village. 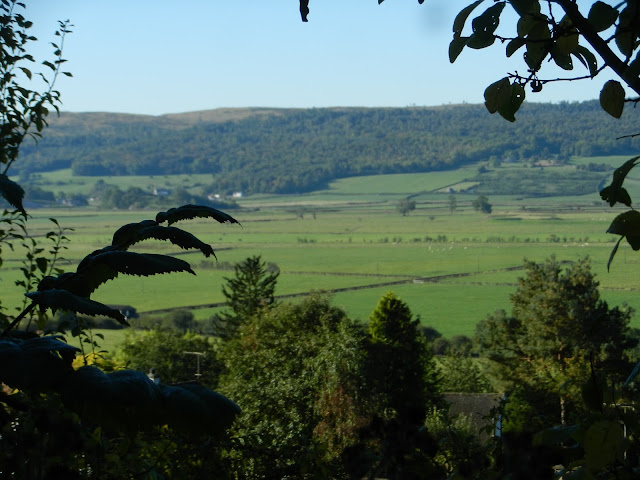 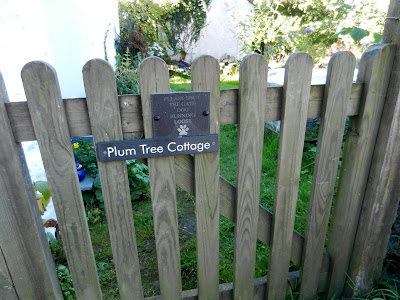 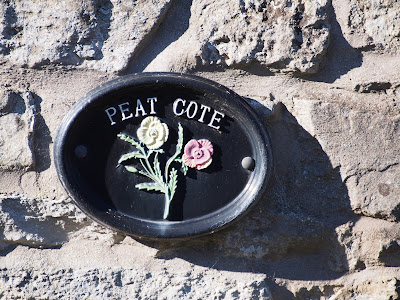 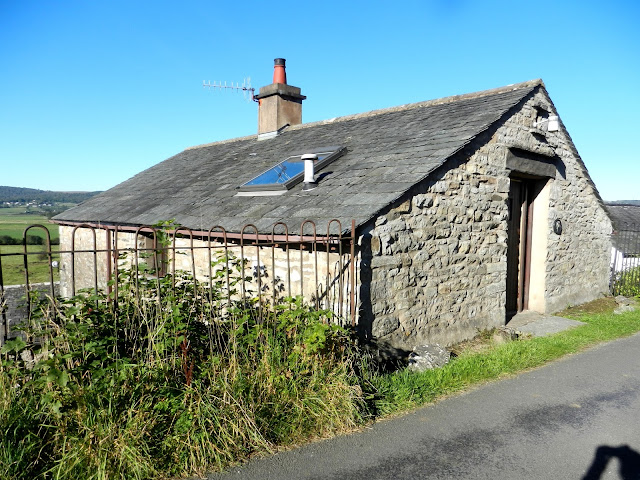 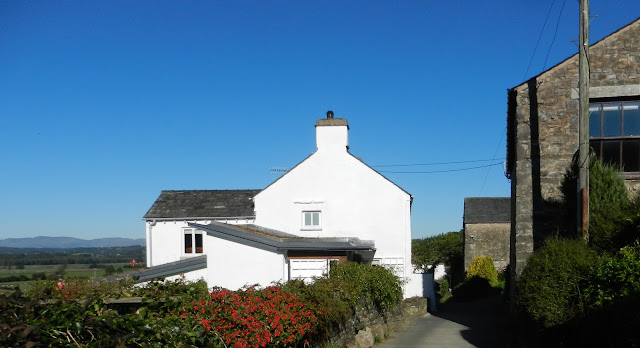 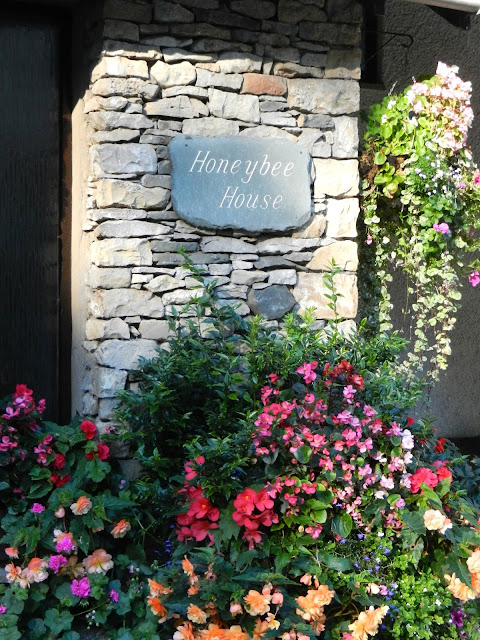 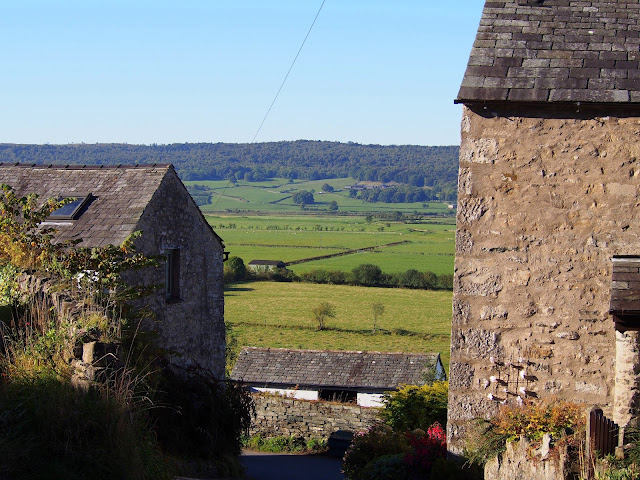 The drive north to Kendal necessitated some more driving in very narrow roads. Luckily, the turn-outs are frequent, because we ended up having to use them quite often. 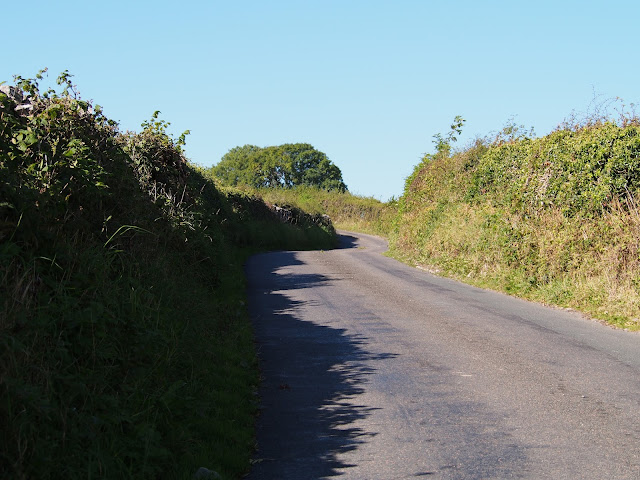 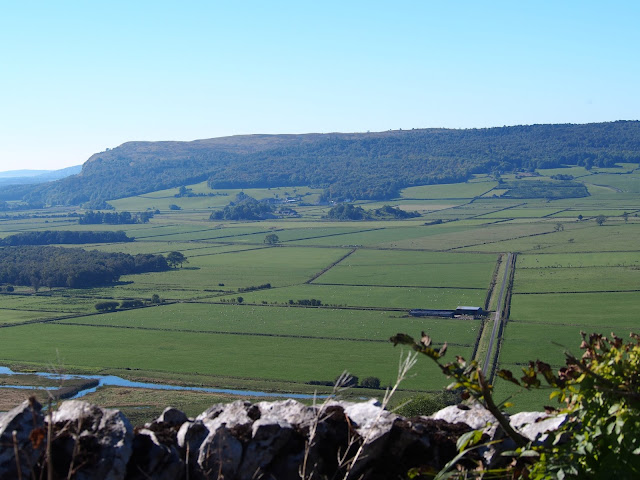 We had a walk around Kendal, visited the money-changer, and headed back to Brigsteer to pay our debt. 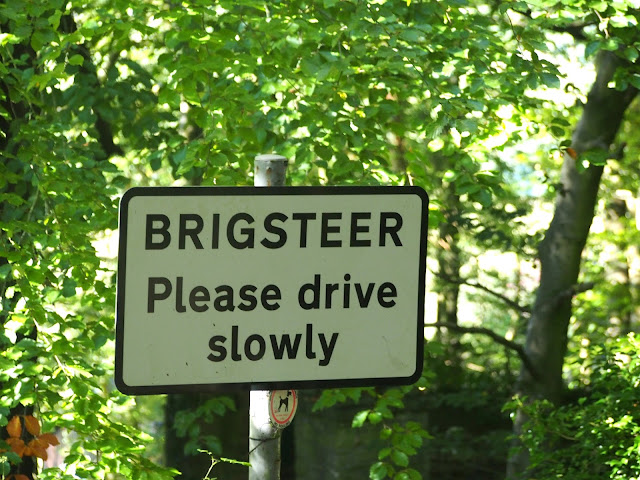 Our next stop was to be Grange-over-Sands, a town on the south coast of the Lake District. We let the satnav lead us down the garden path again. Literally. 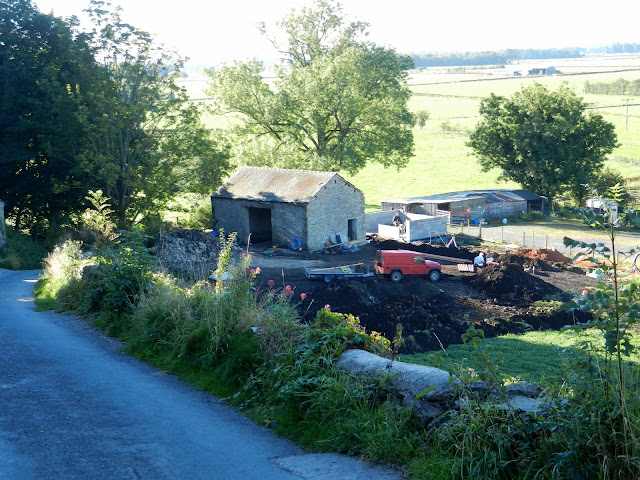 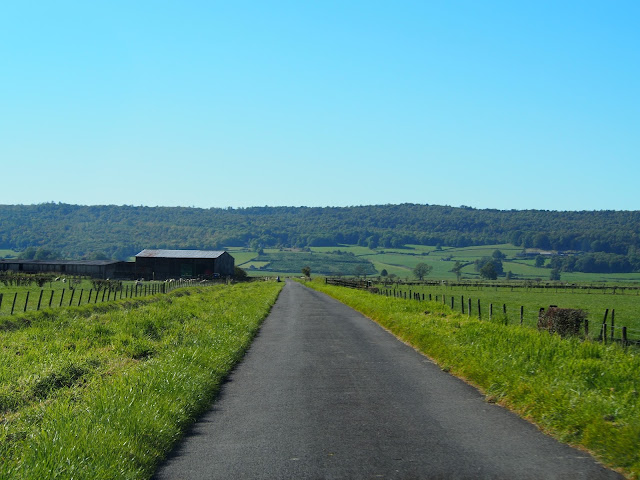 We reached the coast in the early afternoon and, after settling in, decided that a nap was in order.
And the joys of Grange-over-Sands will be shared in the next post.