I am 61.
I have never been in a car accident.
These two statements are fact.
But on September 12th I broke that lucky streak and slammed into a Ford truck as it pulled out of a side road right in front of me. I was driving at highway speed and the only thing, I believe, that saved Jeff and me from serious injury was the Eyesight technology in my lovely new Subaru. It sensed the truck before I did and slammed on the brakes so that we only caught the corner of the rear bumper of the truck, rather than the side of it.
I also managed to swerve a little bit and then pulled over onto the shoulder. The truck crossed the highway and pulled onto another side road. I sat, shaken, and called 911. Strangely, the air bags didn't deploy, which was a blessing because I think they would have caused us more pain than we had. Within five minutes a state trooper was parking in front of us. We didn't realise that we were mere yards from the State Police station and were highly impressed with the speed with which she showed up. By then, the couple in the truck had walked over to us. They were elderly (as in "older than us") and the woman, who was supposedly the driver, looked like a meth addict.
The trooper was very kind and helpful, especially after I told her I had never been in an accident before, and walked us through the process.
We didn't think the car looked too bad, but later we learned that the battery had exploded upon impact and the car ended up being totaled.
Oh joy, car shopping again!
My poor baby. 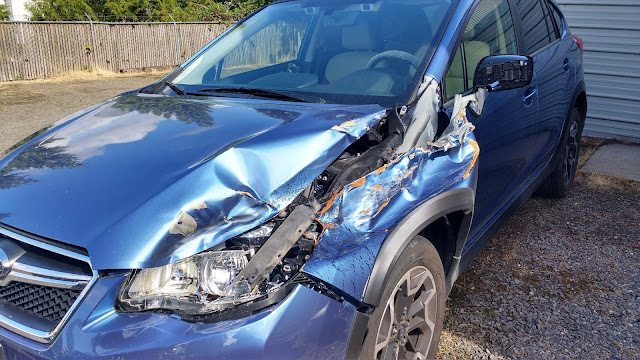 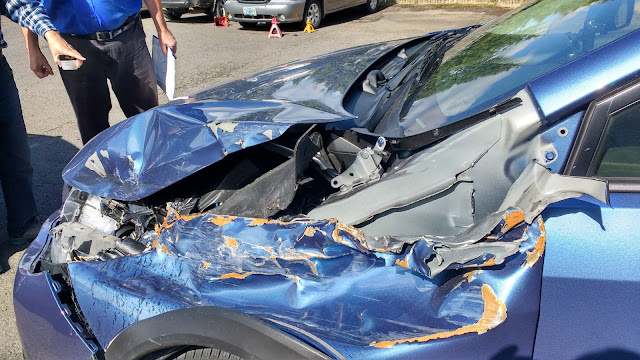 You can see the splashes of battery acid that have started to corrode the engine. 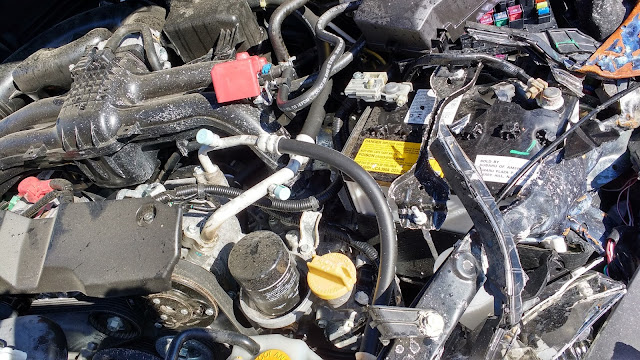 But I'm getting ahead of myself.
Pretty soon another state trooper pulled up behind us and we wondered slightly why all the fuss? Then the first trooper called out, "Susan, could you come over here?"
I obediently started to walk over to her and she quickly said, "Oh, I forgot your name is Susan too. I meant Susan _____," the driver of the truck. So Susan walked over and was immediately handcuffed. There was an outstanding warrant for her arrest. And the man had a suspended licence for DUII. As I said to Jeff, their day was a whole lot worse than ours!
Considering it was a pretty spectacular accident, we were very lucky. I ended up with a sprained ankle from, I assume, stomping on the brake pedal upon impact. And Jeff has developed some hip problems that should hopefully be resolved soon. But it could have been so much worse.
It has been very time-consuming dealing with the insurance companies and medical issues, but the other miracle is that the man who owned the truck had great insurance, so it hasn't cost us a penny.
But we did have to go car shopping again and this is the result. 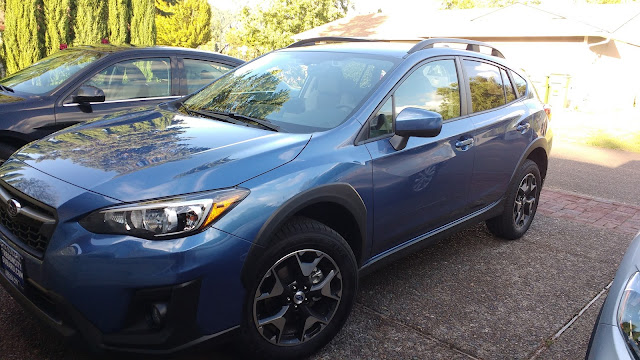 It looks just like the last one, right?
It is actually a  2018 Subaru Crosstrek, which has been the unfortunate victim of some design tweaking that does not make me happy, but my car-shopping tolerance was at an all-time low and I didn't have the fortitude to look for something else. I really wanted exactly the same car, but all of the 2017 models with Eyesight were sold out.
We do love our Subarus, even if we're a little late to the game.
Posted by Sue O at 8:53 PM