Better late than dead on time

Almost a year ago I embarked on what was supposed to be the trip of a lifetime with my sister. We had planned a spectacular road trip, starting with family in Birmingham and continuing with a road trip to Scotland with our cousin Lynne and my childhood friend Janet. We had spent hours online together planning the details of the journey and were so excited for it. Unfortunately, Anne had a health crisis right before she was supposed to leave on the plane from New Zealand so she stayed home. It was shattering for both of us, but more so, obviously, for Anne. She hasn't been back to England since we left when she was eight, so it was deeply disappointing for her.
I forged on, discouraged that I would now be making the trip (which had mostly been planned for Anne's benefit) without her. I was, of course, happy to be seeing family and Jan, but the absence of Anne's joy was a bitter pill to swallow.
I arrived at Birmingham Airport via Iceland. We usually fly to England with Iceland Air as they have the best prices and convenient airports. This time I bid on last-minute upgrades so Jeff and I both flew the longest legs First Class. Did I sprawl across the seat and take full advantage of all of the perks? You betcha I did! I even moved my carcass to where there were two empty seats next to each other so that I could sprawl across both of them!
Lynne picked me up at the airport and spent the next few days spoiling me to death. We went walking several times along the lovely bucolic paths that wind through the area in which they live. We drove out to see the aunties because I couldn't wait until our planned lunch date on Monday to see them. Poor Aunty Marg had injured her hand very badly when her kitchen cupboard fell off the wall and it wasn't healing well. But she was still as ornery and lovely as ever. Uncle Fred had died since my last visit and he was sorely missed. Aunty Con was as chipper as ever and filled my head with stories of her life with Uncle Dick. I love these ladies so much.

On Sunday Lynne and I went to church. I wrote about the service on facebook and I am going to just quote that, because I wrote it on the same day and I was so delighted by the whole thing that I can't improve on the sentiments:
Only my Mormon friends who know me well will appreciate how happy church attendance made me today. My cousin and I walked to church and it was a long enough walk that I knew I wouldn't be able to wear dress shoes, so I donned my trusty walking shoes and a pair of pants (because even I can't wear walking shoes with a dress) and off we went. I sat and enjoyed watching people file into this small chapel, listening to the Brummie accents and feeling quite at home. Then right before the meeting, one of the men on the stand asked if anyone played the organ or piano. I hesitantly raised my hand because, you know, wearing pants, but no one else seemed to care so up I went. So today I played the organ in church on Easter Sunday while wearing a pair of not very dressy pants. And several people came up to me afterwards and thanked me sincerely for playing, And no one mentioned the pants or even looked at them.
Then the first musical number was In the Garden, sung a cappella by a German mother and daughter. They sang the first verse in German and the mother cried. The second number was a duet sung by a young husband and wife, The Old Rugged Cross, accompanied by guitar. And no one raised an eyebrow. It was glorious. I sing these two hymns frequently with my Alzheimer's groups and it always elicits emotional connections for them, but I have never heard them in our church before.
And last, but not least, my dear cousin sitting next to me.
Best Easter Sunday ever.

And that remains one of my best memories of my journey.

We met up with the aunties and cousin Mandy for lunch in a very noisy restaurant. It was deliciously uproarious. Here is Con, listening intently. 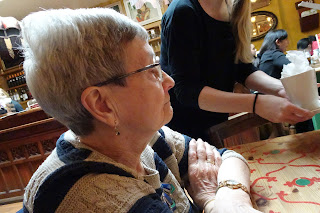 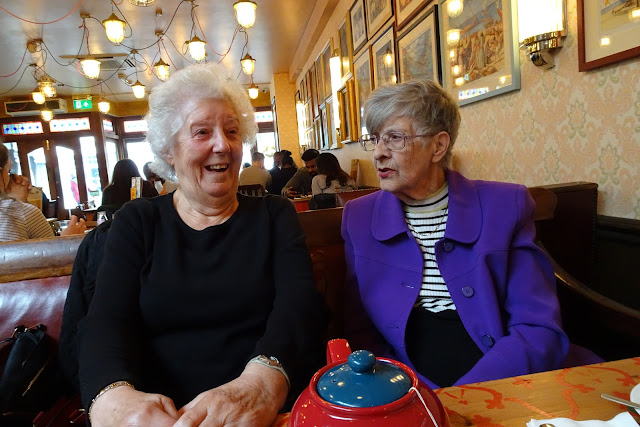 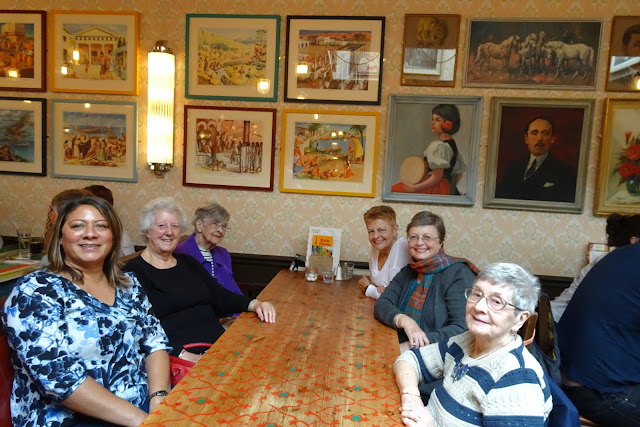 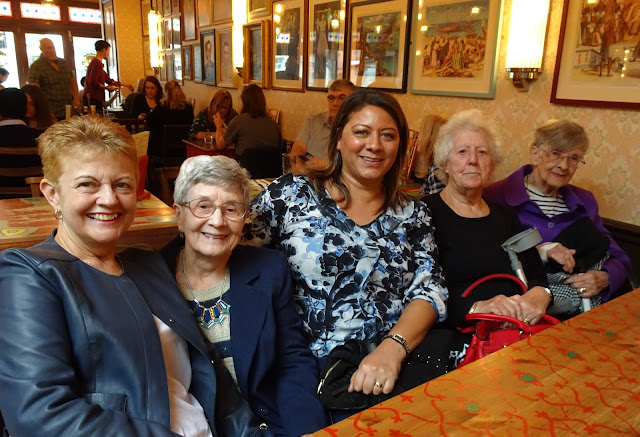 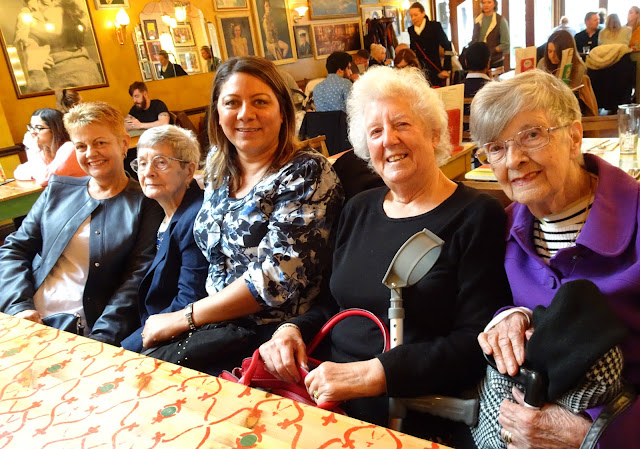 Lynne had been unsure of whether or not she would be able to join Jan and me on the trip as well, as Richard had been very sick after their trip to Dubai, but he was recovering nicely so I was hopeful that she would change her mind. Then several other family members got sick and she decided she needed to stay and take care of them. I was disappointed again and feeling guilty for being completely selfish in worrying more about my own disappointment than everyone else. Guilt is not a pleasant companion.
Jan was very brave and agreed to drive her car, as the original plan was for Lynne to drive Richard's car. She had little experience driving such long distances as those we had planned. Steve had done most of the driving, as husbands are wont to do. Steve had also passed since our last visit and was sadly missed. We left on Tuesday morning, April 18th, by way of the M6 north toll road. Jan decided toll roads are a good thing because there was much less traffic than the regular motorways. Less traffic is good. Our destination was the Lake Country and then on to Carlisle for the night.
We stopped off at Ullswater Lake at Glenridding and did a smallish hike. Jan does a lot of tramping and is prone to leave me in the dust, hence the many photos of her back as she walks ahead of me.
Ullswater Lake is the second largest lake in the Lake District. It's not very populated but is a popular destination for those with sailing boats and, of course, trekkers. We started at Glenridding, which suffered severe storm damage in 2015. The effects were still apparent in some places. 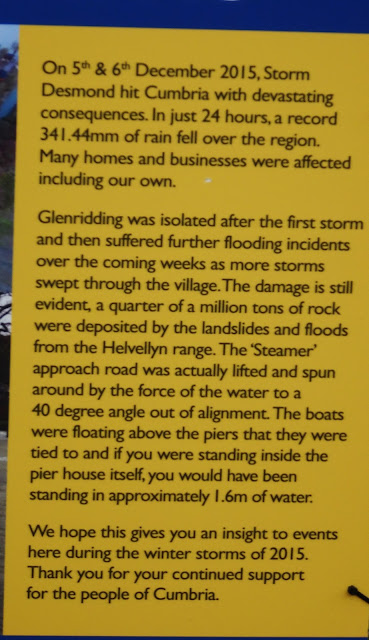 We begin our walk. 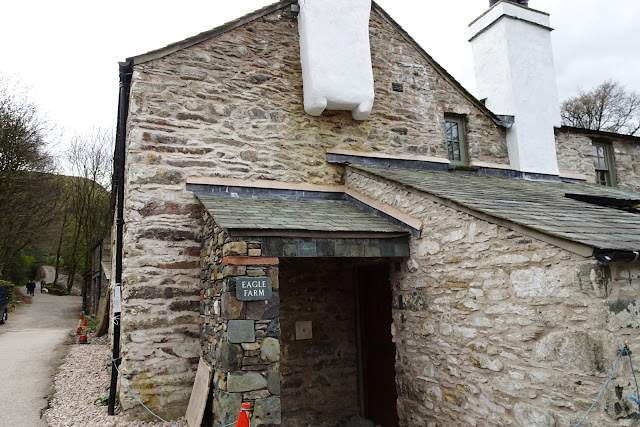 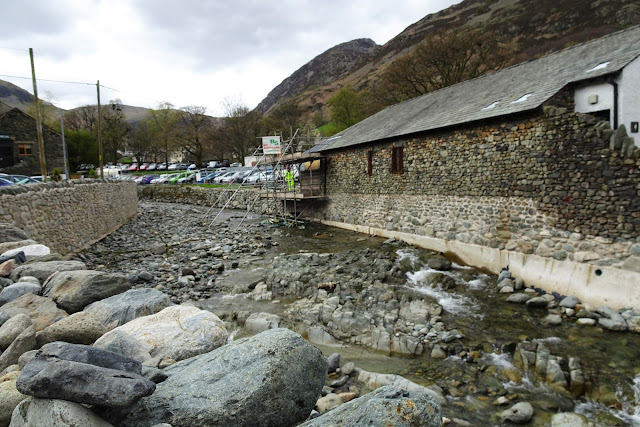 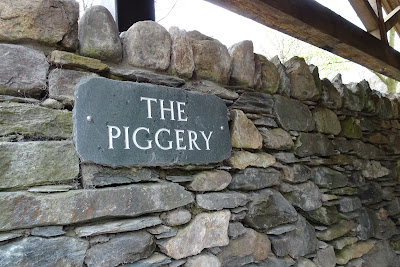 I rather loved these sheep. 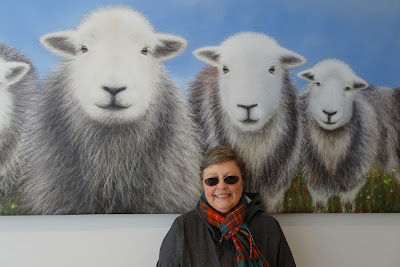 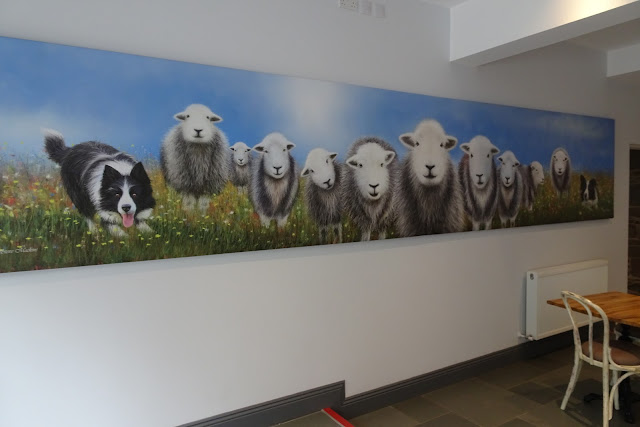 I felt rather lucky to be here in the Lake District again. Life slows down here and everything is green and mossy. 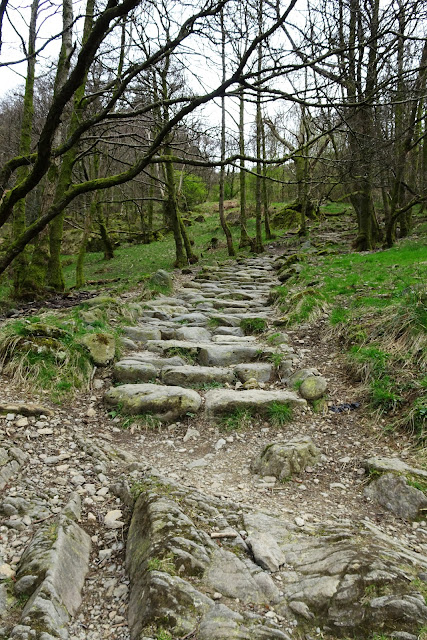 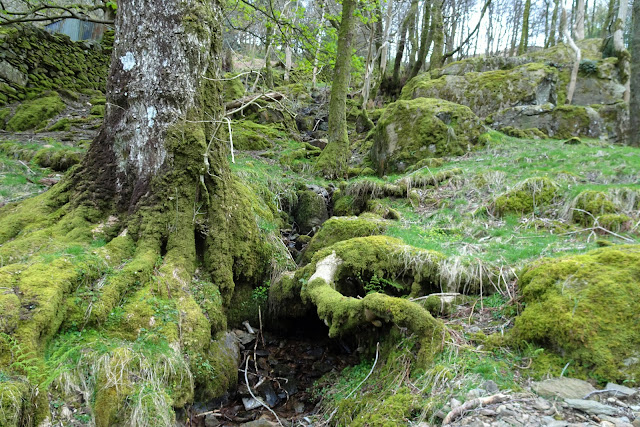 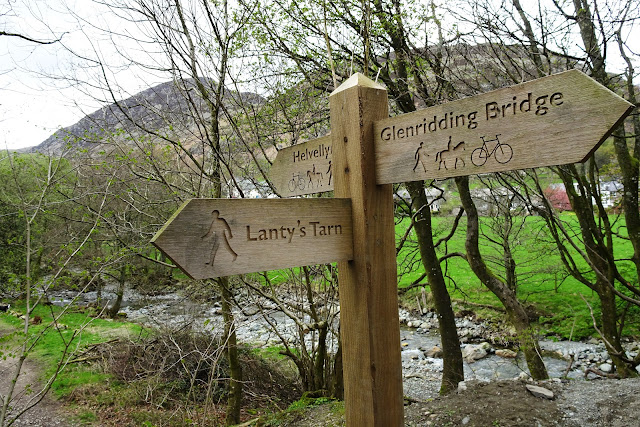 There she goes.
And I am huffing and puffing in the rear. 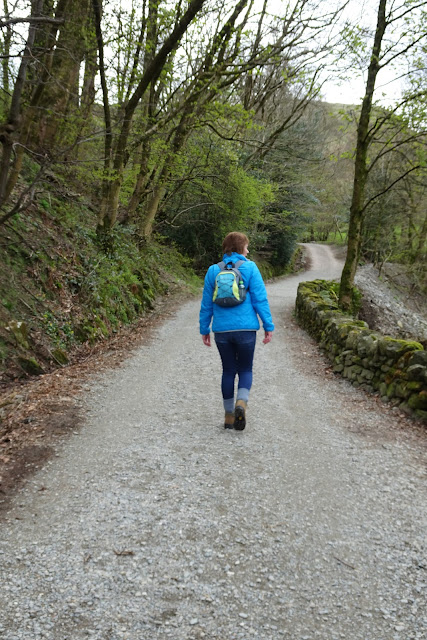 And the view from the top was lovely. 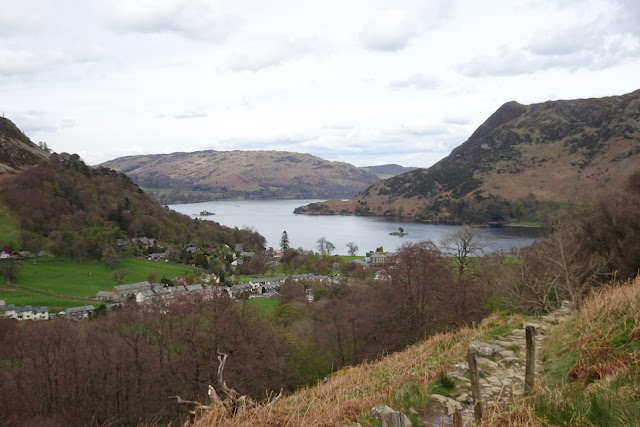 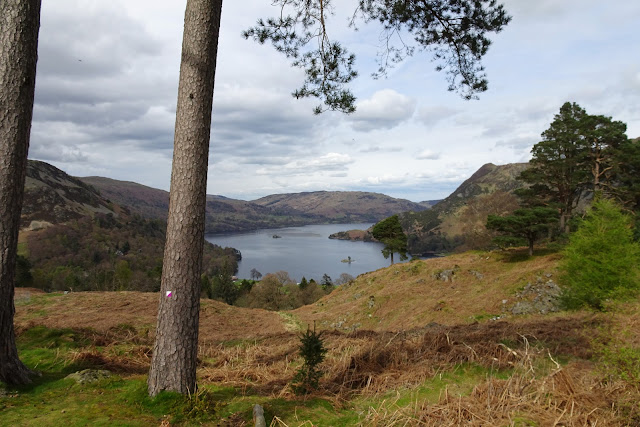 And there were lambies. 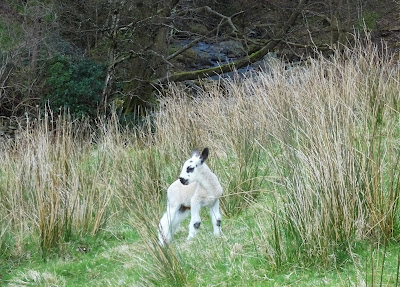 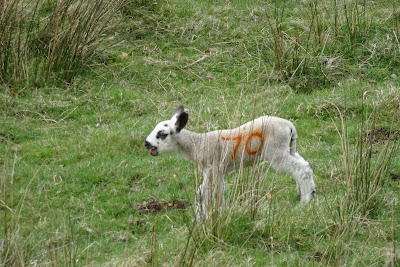 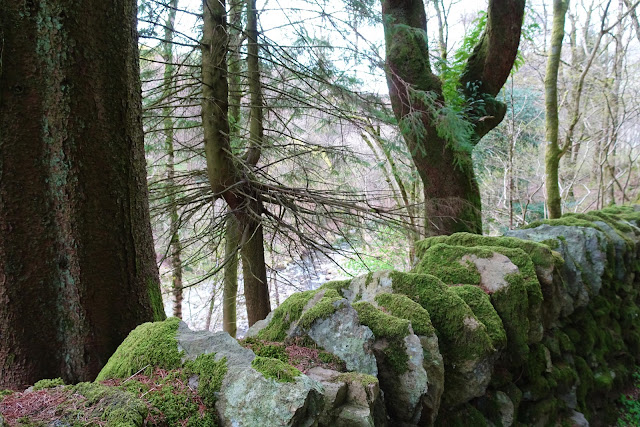 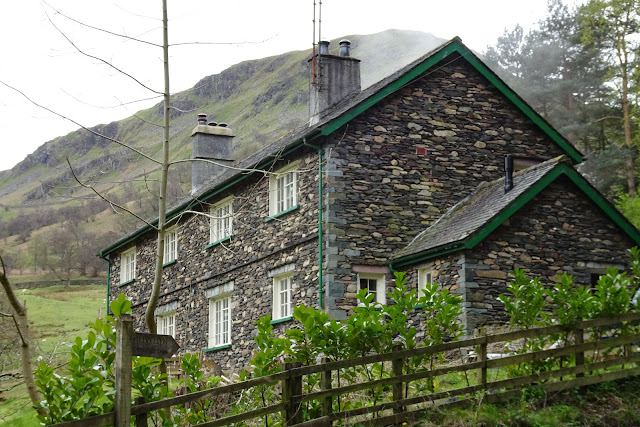 After our wee walk we drove to Monkcastle for the night, where we had booked an airbnb flat. It was a grand country house on a farm of sorts and we think our flat was a converted stable. We had meant to stop and buy some meat for our dinner but hadn't passed any likely places, so were a bit puzzled about what we would eat for dinner. Luckily, the nice host offered us some fresh broccoli rabe from her garden, so we cooked it with some of my gluten-free pasta that I had brought along and enlivened it with butter from the fridge. It wasn't exactly gourmet fare but it tasted good to our hungry tongues.

The flat was adorable and we happily retired to our separate bedrooms after a walk around the property. I read for a while and noticed an intermittent beep from the hallway. Jan had removed her cochlear implant so was undisturbed. As I tried to fall asleep the beeping grew more insistent and it was clear that I was to get no sleep until I fixed the noise. I finally narrowed the beep down to a smoke alarm in the hallway, which was right over the stairwell. I tried calling the host, then knocking on their door (it was after midnight by then) and nothing was giving me joy. I attempted to stand on a chair and reach the alarm to take out the battery, but decided it wasn't worth risking my life. Jan was still sleeping and oblivious and I kind of hated her for it.

The next morning, after no sleep, we told the host of the problem and she was mortified. I was almost delirious from lack of sleep but the good thing is she refunded our money. It's just as well Jan was the driver, so we set off for Glasgow and the beginning of our Scotland adventure via Carlisle and Gretna Green.
Posted by Sue O at 9:03 PM