There was a time, when my kids were young and hadn't yet become corrupted by chain restaurants, that a bowl of cherries canned by moi was considered to be a pretty okay dessert.
I threw out the last jar of black cherries a couple of years ago, finally admitting to myself that they would never be eaten. They were probably ten years old at that point. It pained me to do it, but reality is a harsh mistress.
The dear old cherry tree won itself a reprieve this year by providing a medium-sized crop. We gave a lot away, but I managed to freeze a few bags. The grand-kids will eat almost any fruit in the winter when it is frozen.
Sneaky Nana.
I used to pit cherries with a little hand-pitter. It was painful.
I was very relieved when I found this device on clearance a few years ago. 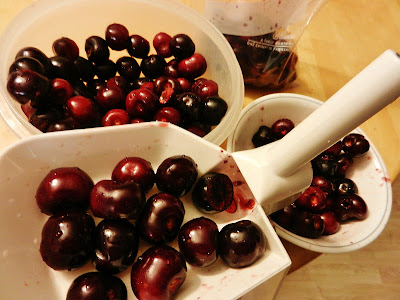 Which was pretty stupid of me when you think about it, because they're only about $20 full price.
[Although there is one that pits ten cherries at a time and sells for a mere $300!]
Sometimes I endure a lot of pain because of my frugal principles!
+++++++++++++++++++++++++++++++++++
I've been wanting to make a batch of laundry detergent for a long time. My big Costco bottle just ran out, so I decided it was time. I went to Winco and bought the necessary ingredients. 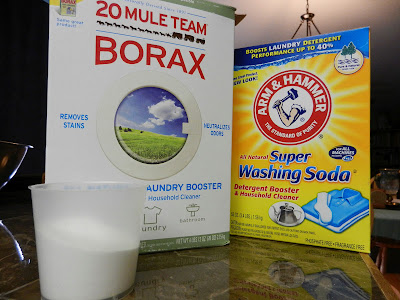 Plus a bar of Fels Naptha soap.
I made a small batch, as I'm not sure if I want to use the dry or liquid recipe in the long-term.
First, I finely grated one bar of low-sudsing soap. I used a third of the Fels Naptha bar and two-thirds of a bar of Ivory soap, as I had scored some free at Safeway last week. 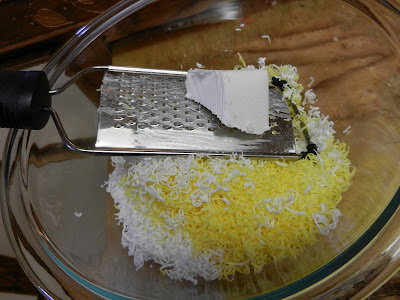 Then  I stirred in a cup of the washing soda and half a cup of the borax.
Make sure you get borax, not boric acid.
And washing soda, not baking soda.
The wrong ingredient could be catastrophic. 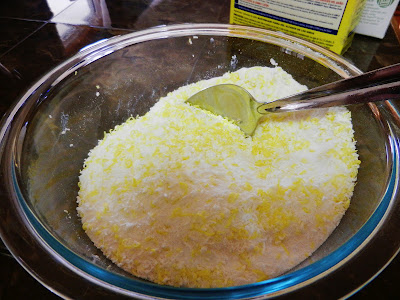 I am told that the grated soap gets dry and crumbly as it sits in the container, so the mixture becomes finer.
Use one tablespoon per load in your top- or front-loading washing machine, two if the load is particularly grimy.
There you have it: laundry soap for a penny or two a load.
And a minimum of effort and dirty dishes. 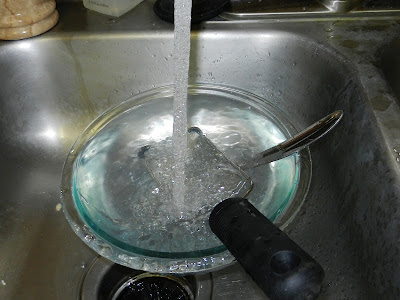 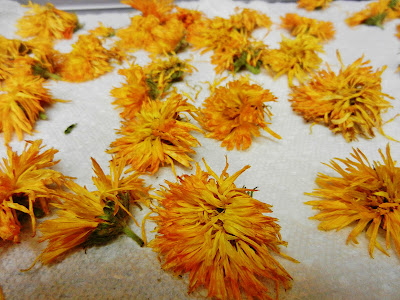 My flowerbeds are overflowing with calendulas that self-seeded prolifically this year.
I seems a handy idea to put them to good use.
The petals were easy to pull off after they were dry.
Hint: don't try to remove petals from fresh calendula blooms.
You will hate yourself and your sticky fingers.
All that was left in the end was this little pile of green stubs. 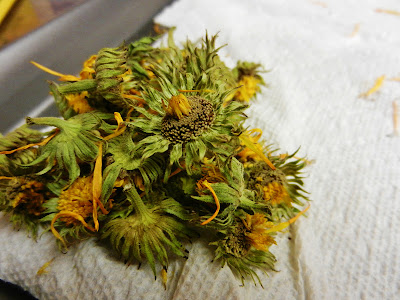 The jar of dried petals sits on my kitchen counter, awaiting my next spurt of energy. 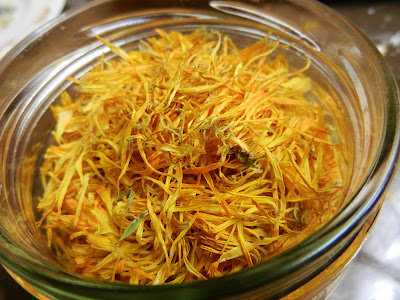 An infusion of calendula and coconut oil, the balm is reputed to be good for all kinds of skin ailments, including bug bites.
Instructions will follow.
+++++++++++++++++++++++++++++++++++
I spent this morning garage-sale hopping with my friends, Barb and Lori. It was garage-sale heaven in our town today. The weather was sunny-but-not-too-hot and signs everywhere proclaimed "HUGE garage sale!"
Some of the signs were lying through their teeth, but I found a pressure cooker for a reasonable price, which I've been wanting for a long time.  We all found lots of great stuff and we went home happy.
I'd love to hear about your domestic triumphs. You can share them below.
*
*
*
*
Yeah, you got me. It's just a ploy to get comments!
But seriously.
Share.
I'd love it.
Posted by Sue O at 10:15 PM