...the art of keeping a horse between you and the ground.

I was looking over my Adobe files and noticed that I had missed reporting on some fun events of late summer.
While Charlie and Annie were home in September we had a family horse-riding afternoon.
You may recall from earlier posts that when I was a girl, all I wanted in life was to be a ballerina and ride horses.
Instead, I got piano lessons.
For which I am very grateful.
But a piano is not a horse.
I used to read Black Beauty and cry.
I read the sequel and cried.
My friend Janet got a horse and I was jealous.
(But I didn't cry about it.)
We used to walk around the village and feed the local horses carrots and apples and I would wish that they were mine.
I guess I didn't know enough to nag, not having a TV and all. All my bad habits were innate, not learned from bratty kids in a sitcom.

Years later, as an independently wealthy teenager, I would rent a horse for an hour and make it go as fast as its unwilling legs would carry me. It fulfilled a little of the old childhood yearning and by then I had lots of other interests anyway.

I haven't climbed on a horse for decades, so I was unsure if I would ride, but the kids were excited.
Some of them.

The day was gloriously sunny. We picked up pizzas from Little Caesar's and headed up the mountain.
Annie is an equestrian from way back. She used to exchange babysitting for riding lessons from our friend, so was the most experienced of us all. Kenzie has been hankering to ride for a long time and she loved it. She rode alone a little later. 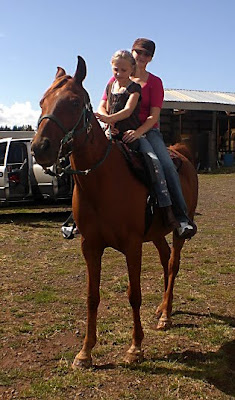 Annie and Charlie galloped fearlessly around the path, as did Jon. The boys both rode horses at Camp Baldwin when they were scouts. 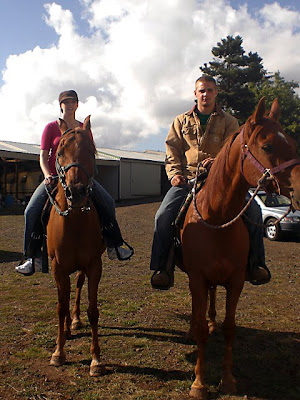 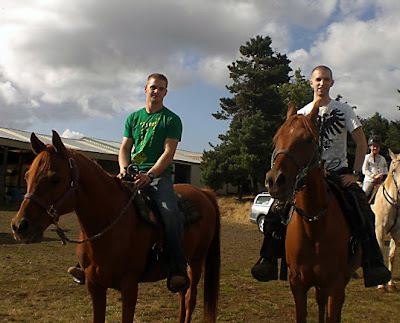 Bethany had never ridden before and she was leery. We all told her she would be fine. Unfortunately, her horse decided to gallop downhill about 20 yards into her ride. She managed to stay on, thanks to all the good advice we were shouting at her, but when she returned to us her face was white and she was shaking. No, she didn't go for a repeat performance!
I think this was taken after the ride. Notice the rather desperate quality of her smile. 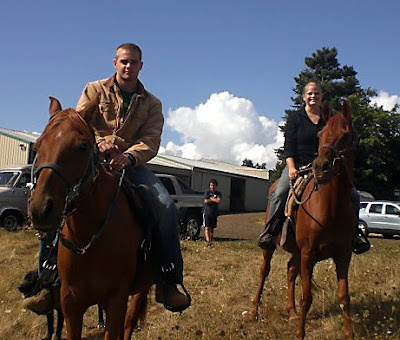 Jenny was just as apprehensive as her face suggests. She had a nice calm ride, being led the whole way. 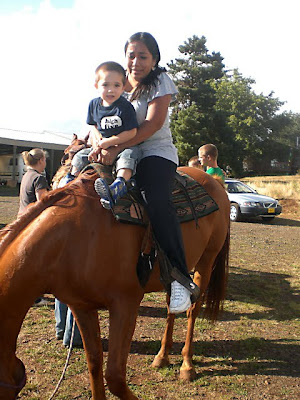 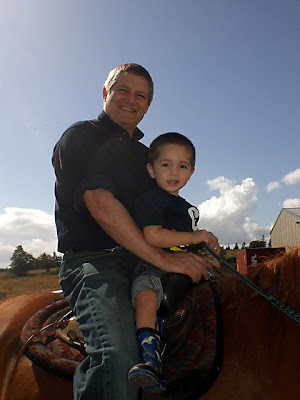 And moi?
Yes, I braved it.
Strangely, my gammy leg was a bit of a handicap because of the limited range of motion.
But it still felt good!

Charlie had so much fun he went back again a couple of days later.
With a GIRL.
Posted by Sue O at 1:53 PM