I succumbed to the lure of Living Social yet again, so last Friday the four oldest grandchildren and I paid another visit to My Masterpiece Art Studio.
This was Josh's first time and he refused to choose a project.
That's okay, I said, you can watch for a while and choose something later.
He gave me The Look. 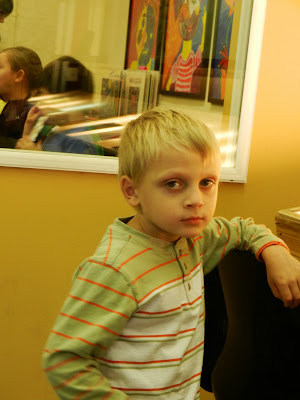 In case you didn't know, Josh is not easily swayed.
The other three chose some masterpiece knock-offs.
Thomy chose coloured pencils as his medium and got right to work. 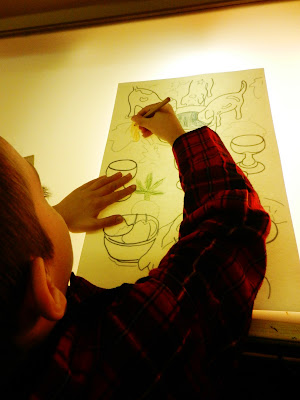 Kenzie chose Degas ballerinas, of course. With a little instruction from moi and a copy of the real thing she was well on the way to her own masterpiece. 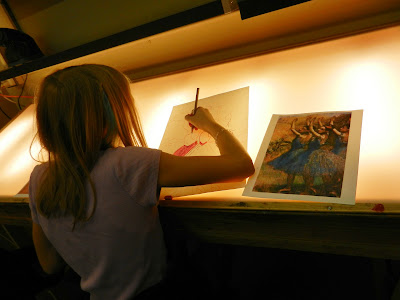 She used pastel chalks and learned how to smudge and overlay the colours. 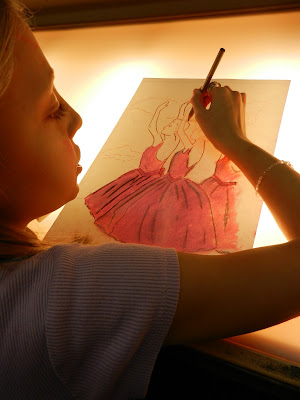 Do you want to choose a project Josh? she asked every few minutes.
He merely looked on. 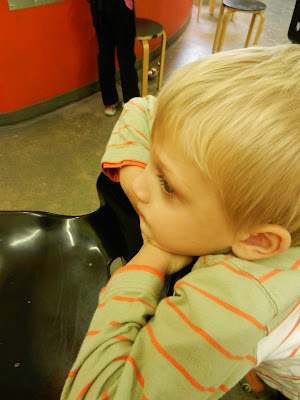 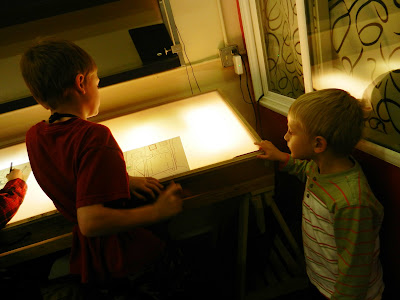 Josh, you ready to start something? 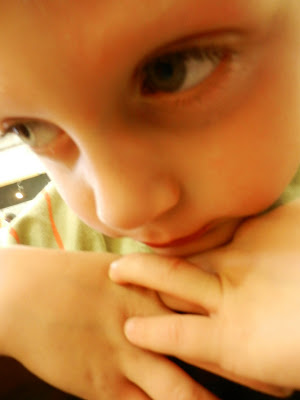 Thomy is an artistic savant and allows nothing to distract him from the work at hand.
He finished first and favoured the camera with his ohboyit'stimetosmileatthecamera face. 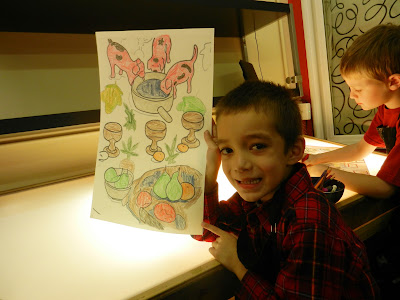 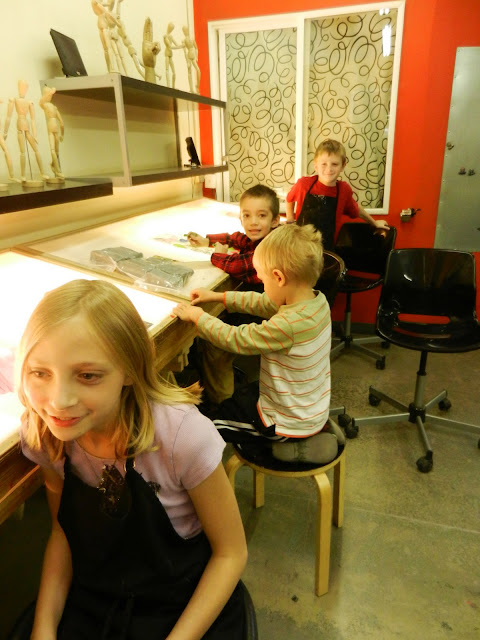 Daniel got impatient and had to be cajoled into colouring the walls.
I helped.
But he finished it and made a present of it to Papa when we got home. 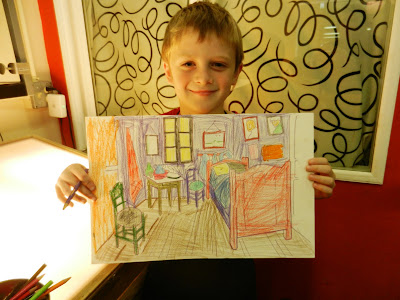 Kenzie stuck to it and I was personally quite impressed with the finished result.
She said it was for Natalie for Christmas. 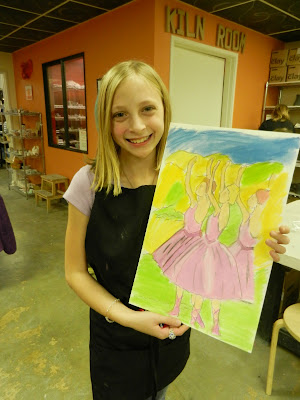 The second project, chosen by all and sundry, was clay sculpting.
There was so much clay that I sat down and played with it too.
Do you want to make something with the clay, Josh?
Nothing but The Look as he cleaned out the potato chip bag. 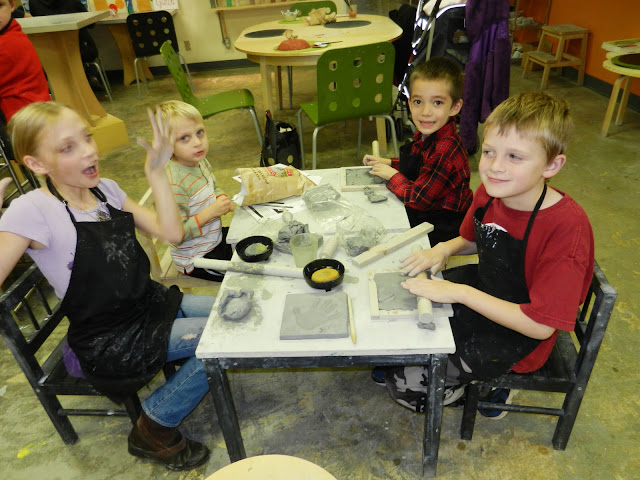 I made a tile and persuaded him to put his handprint in it. The idea caught on and the other three made some too.
Josh warmed up and eventually made a few sculptures of his own.
Hah! Nana wins!
At which point I discovered I had left my camera's SD card in my laptop at home and its memory was all used up.
So all you get is a pic of the brilliant fall colours we passed en route to.... 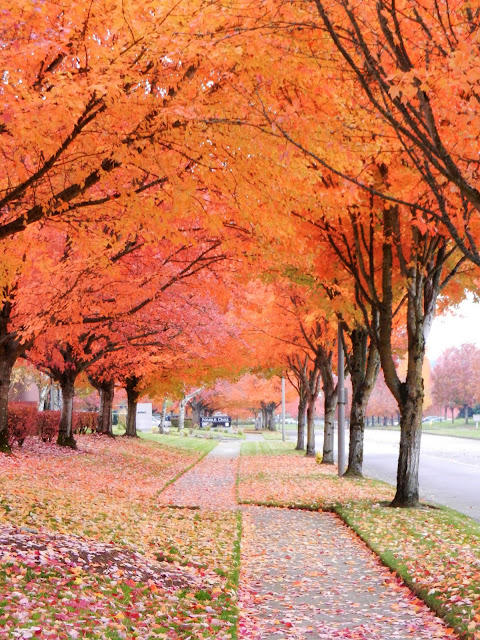 ...Coldstone Creamery, where we used up another Living Social coupon and bought ice cream for the kids and a caramel-pecan turtle pie to take home for the grown-ups. 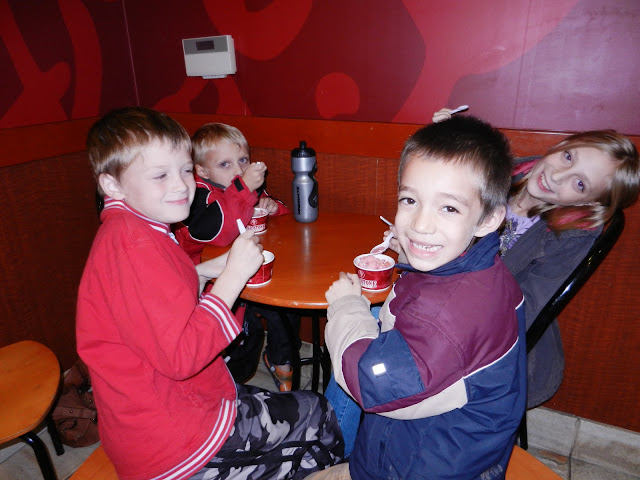 Only the aforementioned kids were still hungry, so they ate most of it.

It was an enormously fun day with the grandkids. I love experiencing their personalities and watching the cousins interact. Because I grew up in a small family with no extended family nearby, I revel in my role as Nana and facilitator of memories like these.

Life is good and I have many blessing to count.
Care to hazard a guess at what my masterpieces are?
Posted by Sue O at 12:08 AM