Don't be diggin' my grave just yet

I've long decried our culture's emphasis on physical appearance, and in many ways I've refused to follow the accepted norms of aging women.
I don't dye my hair.
I rarely wear makeup, except for a bit of lip gloss most mornings. Chapstick is my weapon of choice.
Skinniness has never been my goal, although I did spend the first forty years of my life being mostly on the slim side. Besides, the mere mention of a diet causes me to suddenly have a self-defeating ravenous appetite.
And let me say right here, a certain percentage of my unwillingness to put a large amount of effort into my appearance is pure laziness. And a bit of angst that men are held to a different standard than we women. But I truly believe that our worth is determined by our good acts and by what is in our hearts and souls, and that is what should shine from our faces. But if your makeup and well-coiffed hair make you happy, you go ahead and keep on with it. We all draw our own lines in the sand, and that's how it should be. I suppose my wish for all of us is that we could feel free to be our unadorned ourselves, without the artifices that modern society has imposed upon us and without somehow feeling inferior.
I admire women who climb mountains at the age of 90 but I've never really aspired to be one of them. I am impressed with myself when I do an eight-mile hike or ride my bike anything over ten miles. Or climb a volcano, even if I did break my leg on the way down. I tell myself, at least it was on the way down!
But here's the thing. Lately, I have packed on the weight. If I gain any more, I will have to find wider leggings, and that would be just sad! When I look in the mirror with my glasses on, all I see are wrinkles. Droopy eyes. Graying hair. Saggy tummy and everything else. So I feel old and unattractive. And sometimes I just have to give myself a kick in the rear and remember that I can still go out and conquer mountains and muddy trails and pretty much anything else that comes my way. I may not look as cute as I used to but I can still live life to the fullest. I've been told that my smile is my best asset, so I'm going to use it. Lots! And I'm going to blog about the adventures so that I don't forget about them. Because you know, the memory ain't what it used to be either.

Last week, Jeff and I were on our own for Thanksgiving for the first time in almost 38 years of marriage. At first, I thought it would be okay to cook a small dinner just for the two of us. We had thought about going out to the Ranch, as some people were cooking a community dinner, but I had to work on Friday. Then I was able to do the group earlier in the week and so we drove out to central Oregon on Thursday morning. We met the Bradys down at the Senior Center and had a nice lunch, smoked turkey with all of the trimmings. Afterwards, we went over to see their partly finished house and then went home to relax at Vista House for the rest of the day.
On Friday morning, Bryce and Brenda came over for a late breakfast and then we drove to the Metolius River with the intention of hiking about five miles round trip from the campground to the fish hatchery. And we did! It took us about an hour and a half to get to the hatchery, and less than an hour to get back to the car park. Two factors influenced the discrepancy. On the way there, some of us had to keep stopping to take creative photographs. And talk to fishing guides. On the way back, we were ravenous and highly motivated by the thought of buying dinner in Sisters on the way home.

There were lots of downed trees. This one was unusual because of the large rocks entwined in its roots. 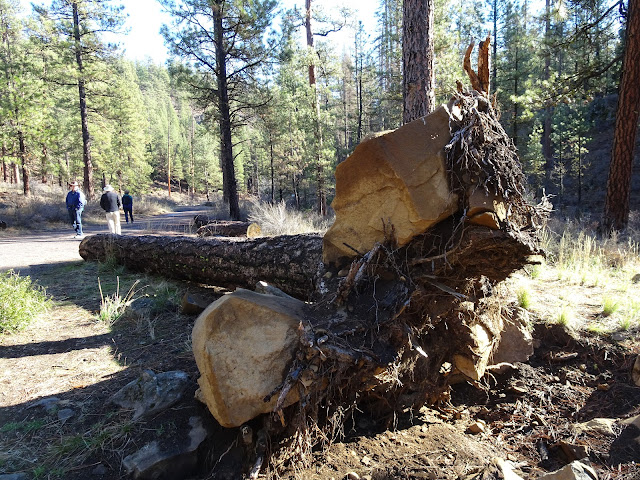 The sign warned us of a detour around an unstable tree, but it took us a while to get to it. 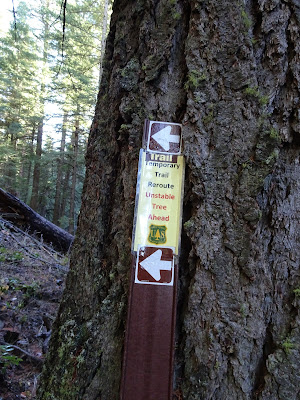 There was a sign at the beginning of the trail that said it was the way to Wizard Springs, but I didn't think anything of it. And then we came upon it. It was actually quite impressive, as the water springs right out of the rocks and feeds the volume of the river. 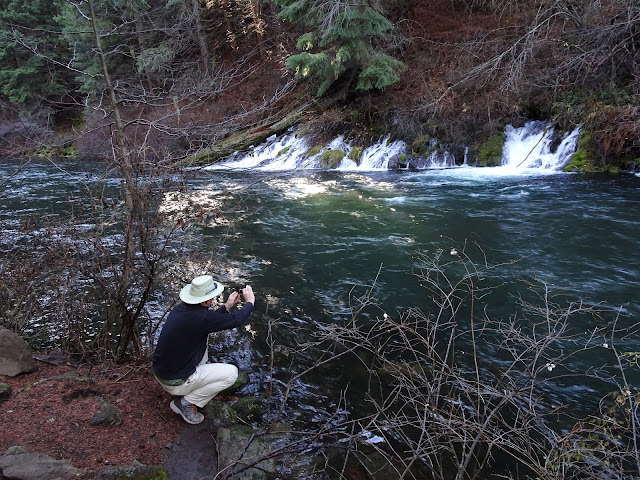 There were many large trees in the river, almost always causing more white water in the already tumultuous torrent. I do love walking beside a raging river. 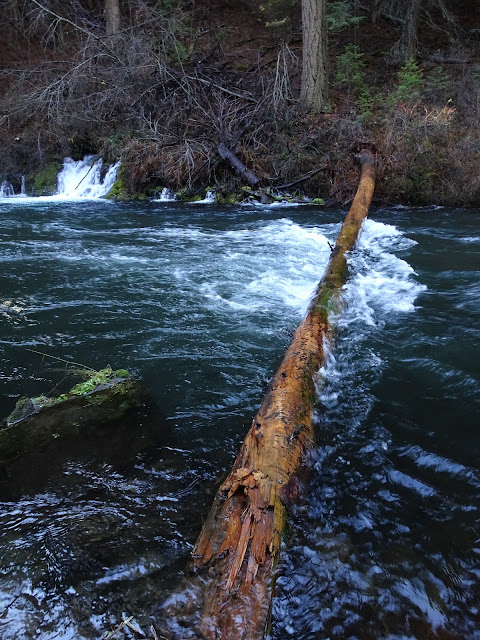 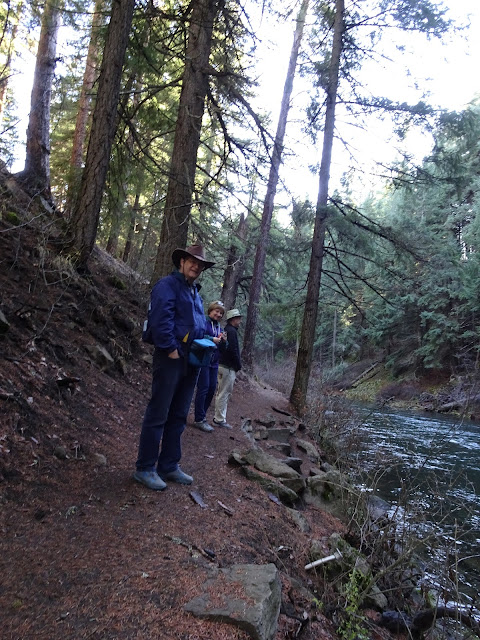 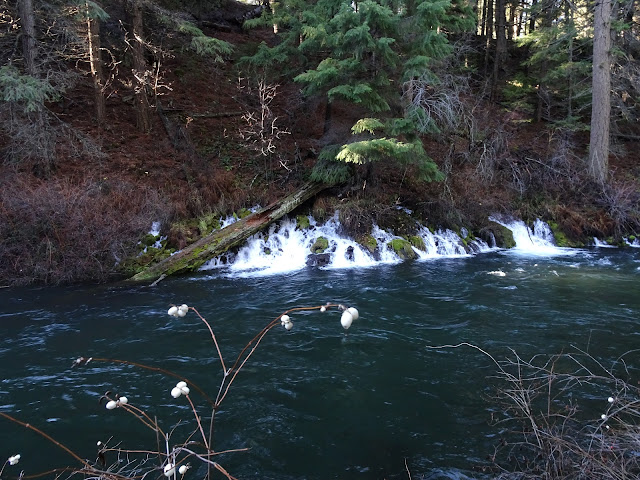 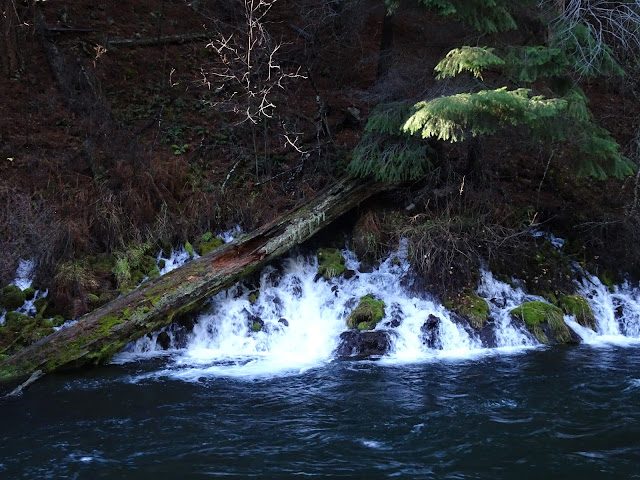 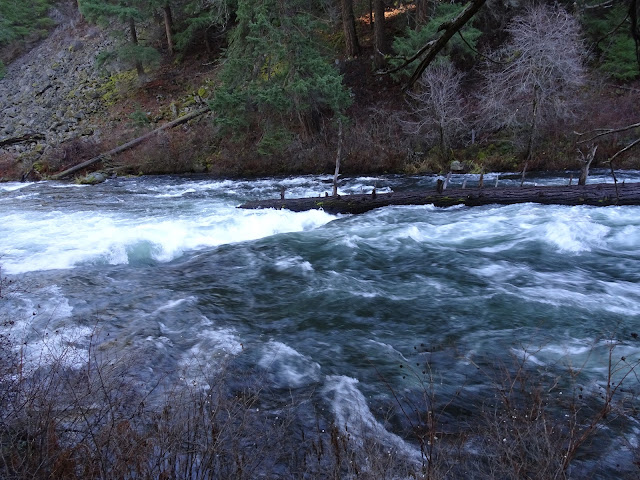 This tree was a mystery. It looked like a recent fall and the wood was shredded. We wondered if it was lightning, but there was no blackened wood. Bears and Sasquatch have also been suggested. 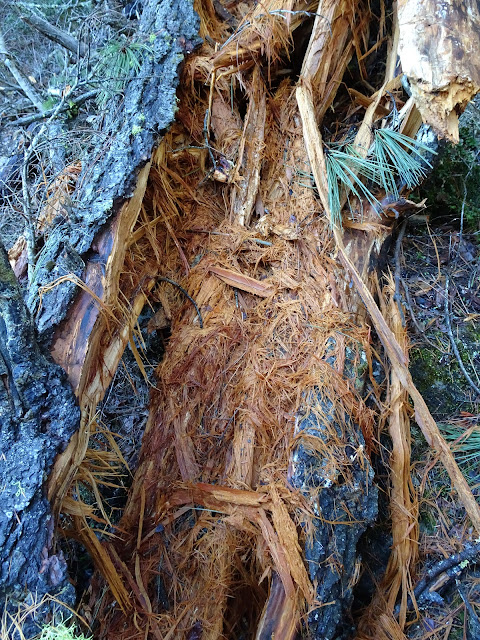 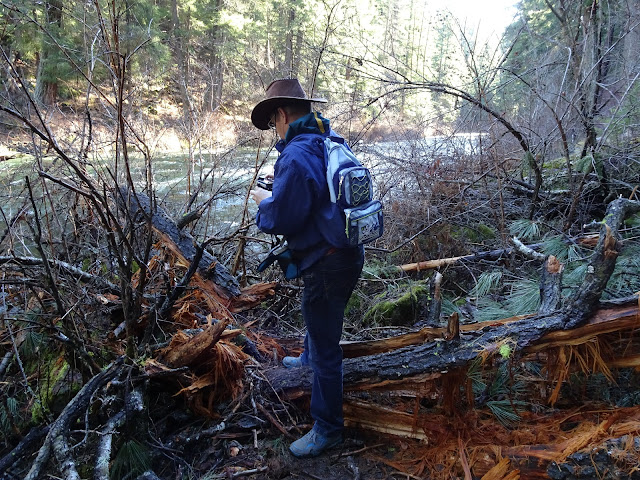 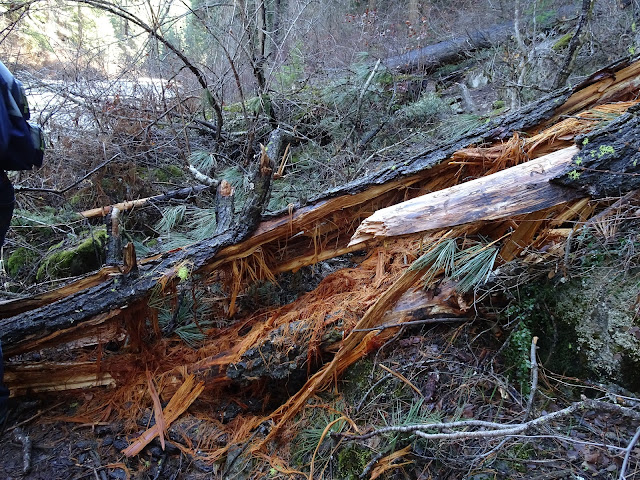 We arrived at the hatchery and the best part was when Brenda got up close and personal with the incense cedar in order to smell it.
It just smelled like wood to me but maybe I didn't get cozy enough with it. 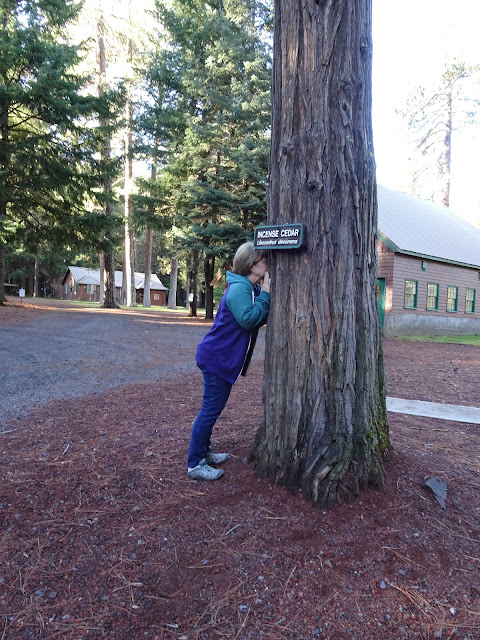 We strode back with gusto and it felt great to be walking through the woods again.
And so I will stop comparing myself to the extreme fitness types and be grateful for the many things I can still do. And then I will do them. Preferably with like-minded and fun friends!
Posted by Sue O at 10:02 PM