You know, some of the lyrics to Lloyd's songs are a little corny, but he is passionate about his beliefs, whether they be political or spiritual, and unafraid of expressing them.
And THAT I admire. 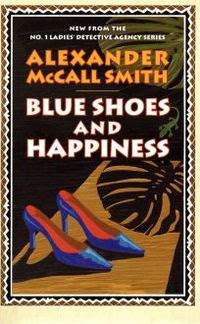 Today's quote is from the seventh book in the series.
Today's quote, you say?
It didn't mean to be, but so it is.
Don't worry, only one more book to go.
Until I start the next series.
Which, I am sure, will be just as quotable.

Mma Ramotswe had been shocked when she had read in a magazine about a famous chef somewhere overseas who threw cold soup over the heads of his junior staff if they did not measure up to his expectations. He swore at them too, which was almost as bad. To use strong language, she thought, was a sign of bad temper and lack of concern for others. Such people were not clever or bold simply because they used such language; each time they opened their mouths they proclaimed "I am a person who is poor in words."

Amen to that.
I am reminded of a quotation which I cannot verify, but goes something like "Obscenity is the attempt of an inferior mind to express itself forcefully."

This one is for Bethany, who feels passionately about such subjects.

Ooooh, I can hardly stand it! I have a whole week's worth of posts all ready to go, but have self-imposed a "one-a-day" policy for this week.
If you want to see more of Lloyd the man, go here to see his online news show on YouTube.

Lloyd's faith is expressed in this video.
He has lived quite the life of contrasts.
Check out his bio to read all about it.

In the Company of Cheerful Ladies 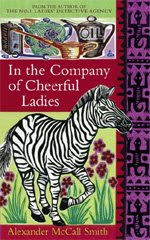 I am loving this series. Every now and then I crack up from the quirky wisdom that is uttered by the various characters. And sometimes, I am just plain awed by the wisdom.
Take these sentences from the end of this book, the sixth in the series:
She loved this country, which was a good place, and she loved those with whom she lived and worked. She had so much love to give - she had always felt that - and now there was someone to whom she could give this love, and that, she knew, was good; for that is what redeems us, that is what makes our pain and sorrow bearable - this giving of love to others, this sharing of the heart.
Posted by Sue O at 3:28 PM 4 comments:

This is for all you Sarah Palin lovers, of whom Lloyd is definitely one.
Although, don't get me wrong, he is happily married to his Mary.
By the way, if you already looked at yesterday's video, watch it again. I had an older version embedded. The new one is much more fun to watch.

In honour of the Taxpayer Protest March in Washington DC on September 12th (you KNOW I'll be there!) I hereby declare the first week of August to be...
....ta daaaah.....
LLOYD MARCUS WEEK.


Go here to read more about the man and to see his answer to the "Stockholm Syndrome" comments.
The man describes himself as a Proud Black Conservative.
He is also an amazing musical talent.
I dare you to listen to the video and not be humming the tune for the next hour.

Stay tuned for a week of LLOYD MARCUS videos.
More fun than conservatives have had in America for, well, EVER!
Posted by Sue O at 1:57 PM 1 comment: