I love hedgehogs. Not those scrawny African things you see in the pet stores, but the round fat brown ones that live in the hedgerows of England. Hence the name, you see. Plus, the little piggy snout.
When I was nine or ten and we were living in North Littleton, my Dad brought home a hedgehog which he had found on the side of the road. It had probably been hit by a car but was not visibly injured. We were pet-deprived at our house (some day I will tell you the "kitten-in-the-tree-house" incident) so Anne and I were immediately in love. We nursed it for a day or two, but sadly, hedgehog died. We had a little burial service for him/her underneath the big trees at the back of the garden. We mourned him/her quietly for some time.
Ever since then, I have had a soft spot in my heart for the hedgehog. We had an encyclopedia set with a volume of stories and one of them was about a hedgehog. He had many adventures, including running into some gypsies who tried to eat him. Apparently, hedgehogs are a delicacy in some cultures. It created a vivid impression on my mind and I was theoretically scared of gypsies for some time after that, although I'm not sure I ever actually saw any.
There are no hedgehogs native to North America. In fact, those in New Zealand were introduced by Europeans. Hedgehogs will roll up in a spiny ball when threatened, although their spines are not poisonous at all. They are nocturnal, omnivorous, lactose intolerant, and prone to fatty liver disease and heart disease because of their tendency to scavenge from human fast-food containers.
I found this video last night and it occurred to me that I have, over the years and quite unwittingly, surrounded myself with many incarnations of the hedgehog. This little animation was created in Russia in 1975 and has been beloved of Russian children ever since. It was recently given an award for being the best animated film ever. I'm not sure I would go that far, but it is very sweet.

Here are a few of my friendly hedgehogs. I also have some hedgehog Christmas tree ornaments, but I'm not about to go digging them out of the window seat today. The big one in this photo is a post-Valentine's-Day-75%-off that I could not resist. The grandkids love to snuggle and use him as a pillow. The tiny one was a souvenir from the trip to England that Bethany and I took almost twenty years ago. The third is a puppet, which I saw at Mum's house and claimed for my own. 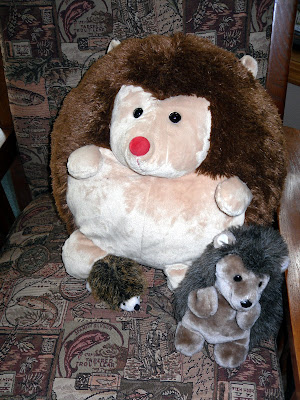 These are tiny, one crystal and one made in New Zealand, again from my Mum. 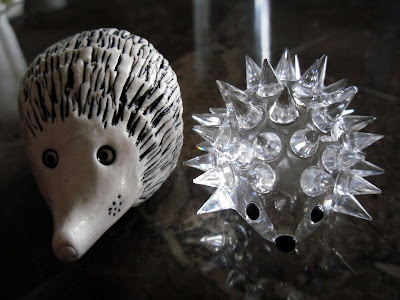 This is a hedgehog baby, Anne Geddes style. Did you know Geddes is a Kiwi? Is it sleeping or is it dead? Hard to tell. 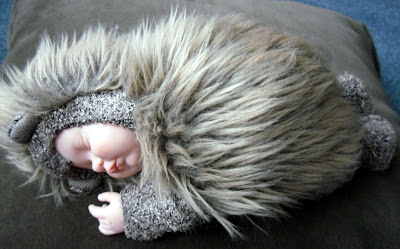 I think this mug was also from England, a present for Jeff. 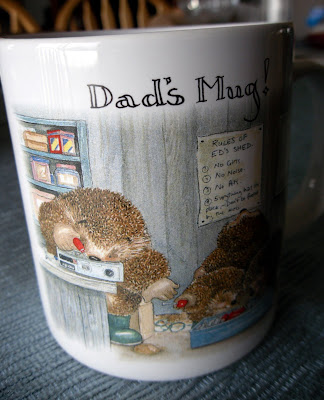 Be careful of pregnant hedgehogs. We babysat a couple of hedgehogs once, for Jonnie's friend Ben. Mama was pregnant. She delivered and ate her babies before we knew what was happening.
Which might be why I always refer to hedgehogs as "he".
Posted by Sue O at 11:33 PM