On Wednesday, we got a not-very-early start on Stratford-upon-Avon, home of the Bard.
Yes, the same Avon that flows gently through Evesham.
And, just for the reveal-all record, I don't think we got an early start the whole two weeks.
We each bought a pass to the Shakespeare attractions. They are good for a year, so we didn't resent the money as much as usual because Jan can use them for her family and friends. I have a feeling she's going to get mighty tired of Shakespeare and his dwelling places.
First up was Anne Hathaway's cottage, which is out of town a little bit.
We still had to pay for parking.
Anne was William Shakespeare's wife. Historians get a little obsessed with the circumstances of their marriage, which were slightly mysterious. Anne was 26, William only 18, and their first child was born only six months later. This has led to all kinds of speculation, but no one really knows much about their marriage. Or if they were even married.
Here it is, a real thatched cottage. This was Anne Hathaway's childhood home. The oldest part of this house was built prior to the 15th century and some of the furniture inside belonged to her family. There were guides at the beginning and end of the tour and they were full of fascinating tidbits about life in the 15th century. 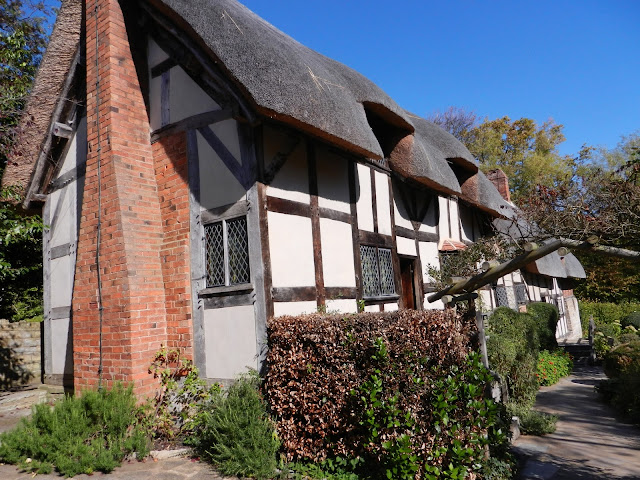 This is an authentic bed of the time period. Notice the rope woven through the bottom board of the bed frame. This is what supported the mattress, leading to the saying Sleep tight, don't let the bed bugs bite. Tight meaning tightened ropes so that the mattress didn't sag. 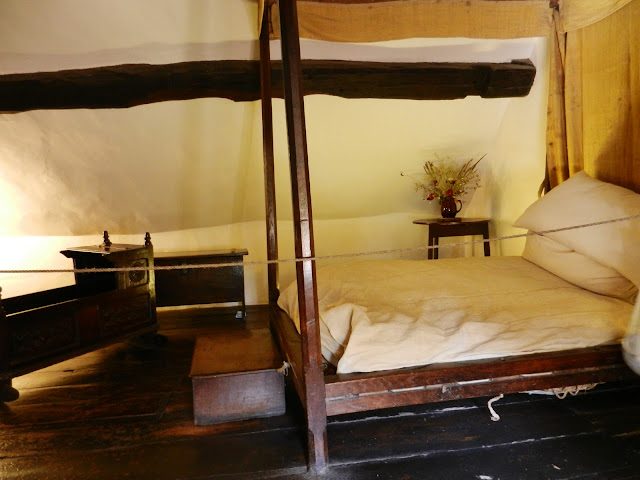 The house is surrounded by several acres of picturesque gardens. Picnic facilities are available and you know we made good use of them!
This is a willow arbour.
You can tell, because it says so on the sign.
It was made nine years ago of living willow saplings, following the design of Shakepeare's time. The new growth that you see sticking up in the air gets woven into the structure or trimmed off, according to need. 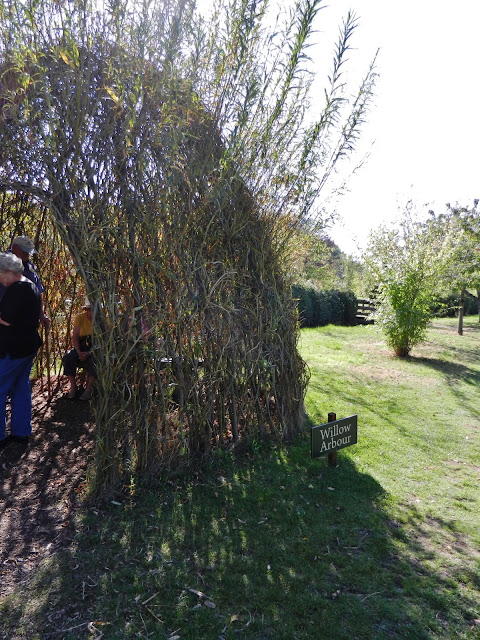 It is supposed to be a good place for a romantic tryst, so we pressed a button on the wooden post and listened to a Shakespearean sonnet recited by a famous actor and tried to be romantic. 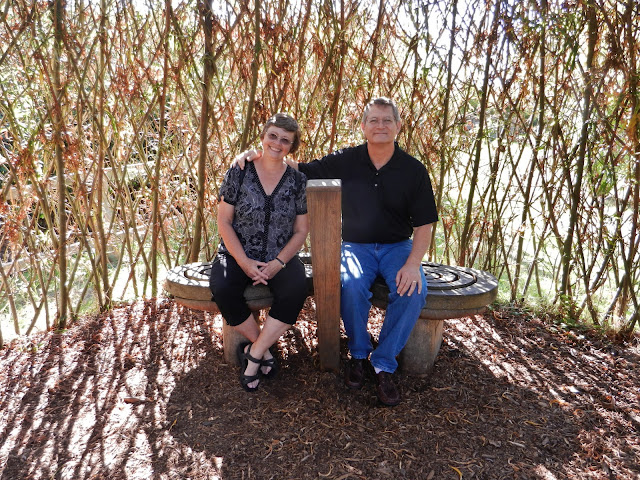 There were a couple of gardeners busily attending to the nearby sweet peas, so we asked them about the arbour. I was intensely curious to know how one would go about creating such a thing, having visions of a smaller version in my garden. As luck would have it, this man from Portugal built this arbour. We were treated to a fascinating description of the process of creating a living arbour. He was happy to share his expertise and to have his photo taken. 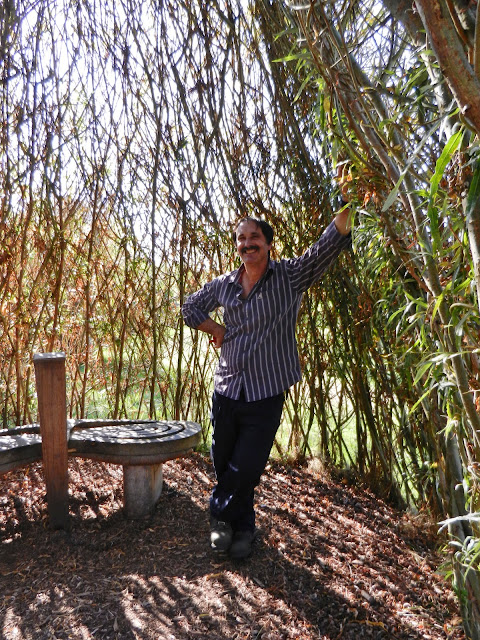 Now there is a dream job! It seems he is quite famous in certain circles for his arbour-building abilities.
On we went into the town. 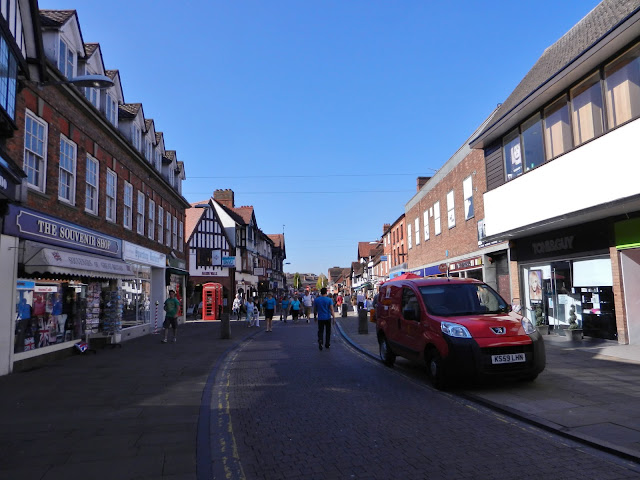 This is the Bard's birthplace.
Let me tell you, nothing is true and square in a 15th century house. Floors slope and walls meet at odd angles. It's best to watch one's footing at all times. 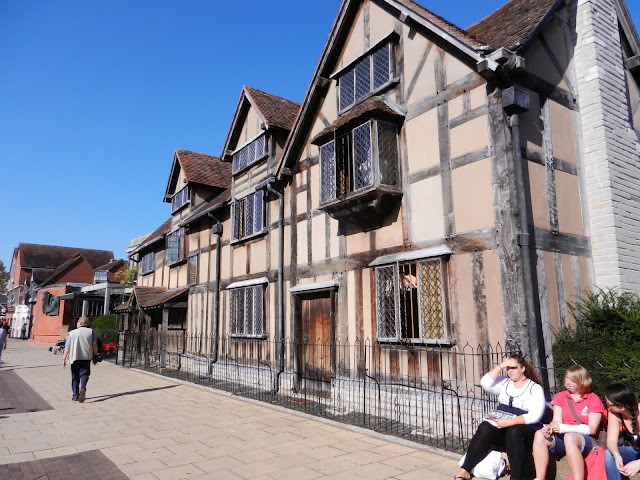 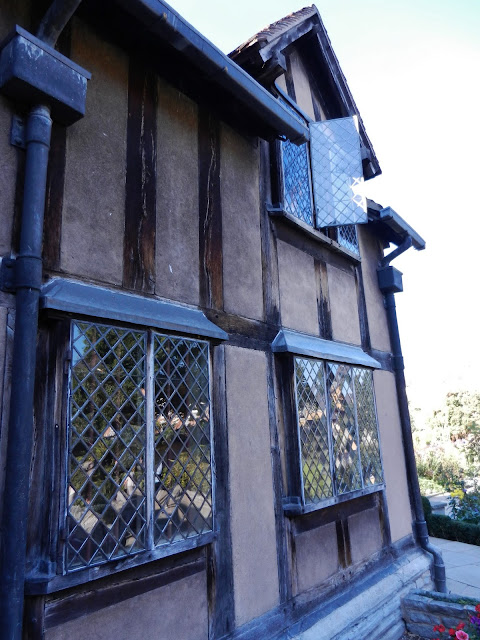 This is a copy of Shakepeare's First Folio. It contains 36 of his plays and was published in 1623, seven years after his death. About 750 copies of the folio were printed and 228 copies are still in existence, although most are incomplete. Eighty-two of those are at the Folger Shakespeare Library in Washington DC. The First Folio is one of the most valuable printed books in the world; in the last ten years, copies sold at auctions for around $6 million. 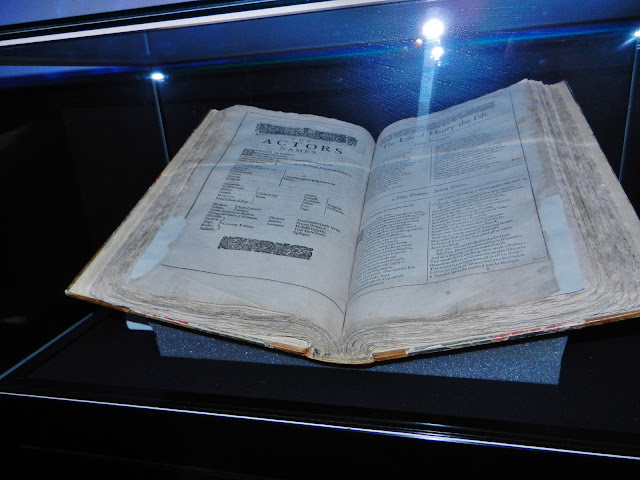 Whereupon, my camera ran out of battery.
Genius!
So we visited Nash's House, which is where William's sister, Susanna, lived with her doctor husband.
Next door to this can be found the foundations of New Place, where the Shakespeares lived when they left London and moved back to Stratford. The house was demolished and rebuilt in 1702 by the new owner, only to be demolished again by another owner in 1759 because of a quarrel with the town authorities over taxation.
Beware of juicy stories told by tour guides. They told us that the new owner didn't like Shakespeare or the tourists that were constantly bothering him and that is why he demolished the house. We found that many stories are embellished by tour guides!
The excavations were interesting, especially after we nabbed an official-looking lady who spent a good half-hour telling us all about their findings. I tell you, all you have to do is ask the question and people are only too willing to share all their knowledge. It happened almost every day (and twice on this day) and I loved it!
In the absence of photos, how about some well-used phrases that were either coined by or popularized by Shakespeare? The list might surprise you.
All that glitters is not gold.
As luck would have it.
Bated breath.
Neither a borrower nor a lender be.
Brave new world.
Refuse to budge an inch.
Crack of doom.
Brevity is the soul of wit..
Dead as a doornail.
Eaten me out of house and home.
Fancy free.
Foregone conclusion.
For goodness' sake.
The game is afoot.
Give the Devil his due.
And there are so many more. An extensive list of phrases and words is here.
It's not really known which he invented and which already existed, but the first record of all of these phrases is in Shakepeare's writings.
I think I need to re-read Hamlet. Consider a few quotes.
There's a divinity that shapes our ends,
Rough-hew them how we will.
Alas, poor Yorick.
When sorrows come, they come not single pieces,
But in battalions.
The lady doth protest too much, methinks.
Rich gifts wax poor when givers prove unkind.
The whole play is quotable.
If you haven't ever read it, you should.
Or, at least watch the movie.
Kenneth Branagh or Mel Gibson.
It's a tough choice.
Posted by Sue O at 9:16 PM