Hands up if you remember Gilbert O'Sullivan, the Irish singer who was known for his gorgeous ballads.
His lyrics were expressive and his melodies were fluid and mellow.
Unfortunately, as happened to so many musicians, his fame dwindled quickly. Although he still writes and performs, his star has never risen to its former heights.
This song, from 1972, takes me right back to my sixteen-year-old self.

I was rarely out of love in those days. If I had to count, I'd say I have loved deeply five times in my life.
One was a whim: short-lived, passionate, and ill-considered.
One was unrequited but lasted for years, in between other romances.
Two were of relatively long duration and necessitated a similar recovery time.
Time when songs like this resonated with and validated my pain.

But then, thirty-three years ago yesterday, I married my best love of all.
Flashback:
Being the advanced age of  twenty-three, I could hardly believe that I was finally getting married. I was just about the last of all my friends to achieve that desirable status, you see. In my disbelief, I found so many excuses to call Jeff on the morning of our marriage that he eventually got a bit annoyed with me.
True story.
But he still showed up to the wedding.

This Christmas, I was blown away by this gift. 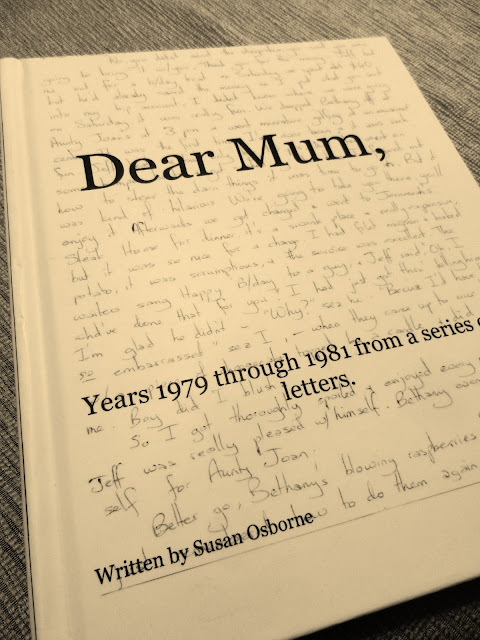 It contains all of the letters I wrote to Mum in the first two years we were married. Bethany spent many hours scanning letters and photos and formatting the book, and the other kids contributed to the cost.
I have loved reading over the letters and reminiscing about those bitter-sweet days, when we were always money-poor but surrounded by love and, in quick succession, two wee babies. I had forgotten so much about my babies and the many hardships through which we clambered in our early days. I've been feeling a bit Alzheimer-ish, as my mind has been lingering in the genesis of our life together, colouring my "now" with shades of the past.

Just for a kick, and for your edification, I unearthed a few oldies-but-goodies and did a little creative editing to jazz them up.
Which reminds me, Bethany, the photo collection was a little slim. Are you the culprit?

Here we are, pre-marriage, on a hill in Auckland somewhere.
My sister probably took this photo. 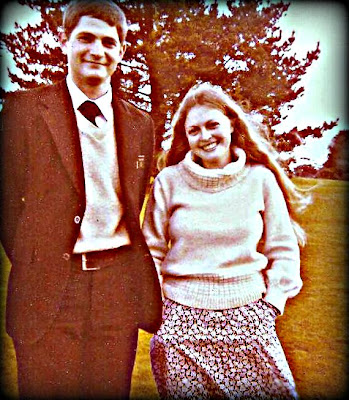 Here we are with our first baby, Bethany, who was only a day old. 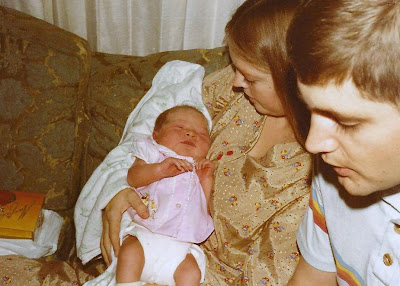 Wow, we were a lot prettier back then! 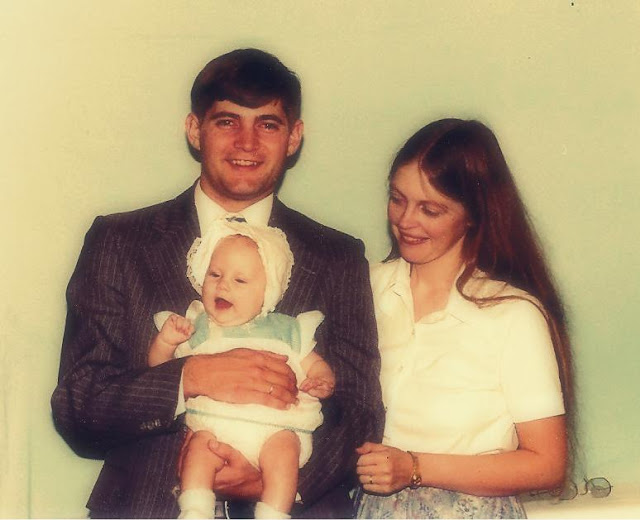 And then we were four. 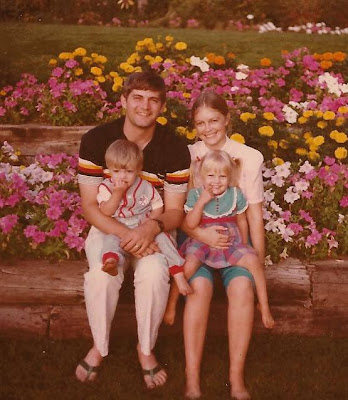 And five. Little Charlie is not there yet, but our beloved Uncle (Grampa) Charlie is there instead.
And Nana. 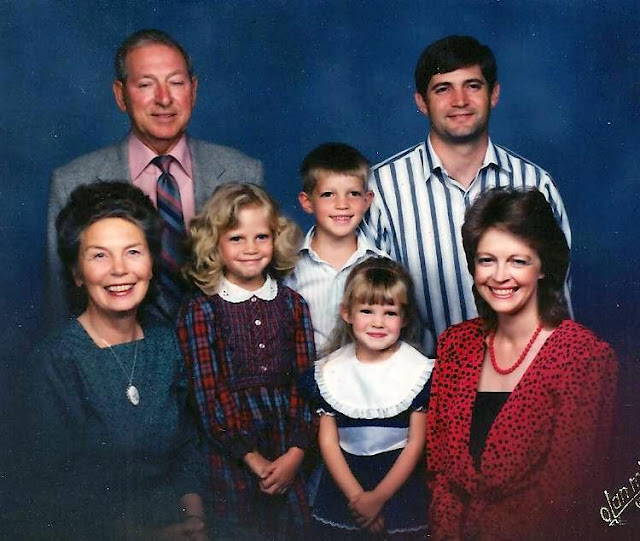 On one of our weekend getaways, in Jacksonville.
The leggings are awesome, which is why I cropped them out.
Crop tool is my friend. 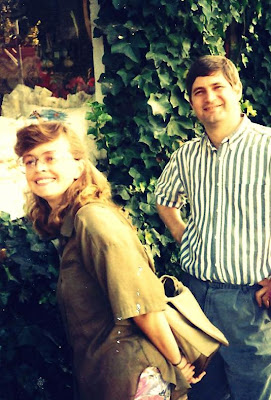 And here we all are with our first adored grandbaby, McKenzie! 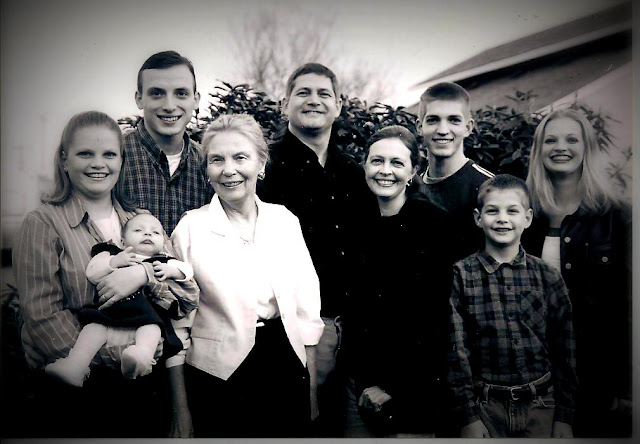 We don't often dress up for Halloween, but I think we did ourselves proud in this one. I don't even remember where we were. Does anyone recognize the chandelier?
Jeff looks quite dashing with a mo.
The Pirate and the Geisha.
Wait, that is Jeff, isn't it? 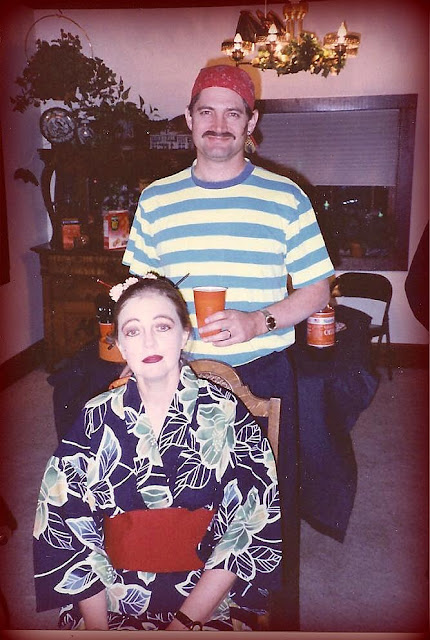 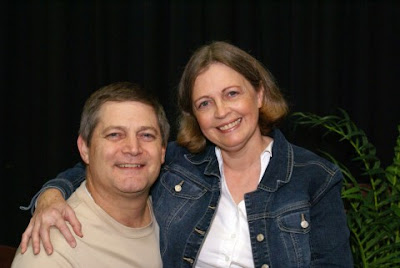 On the Trail of the Couer d'Alenes. 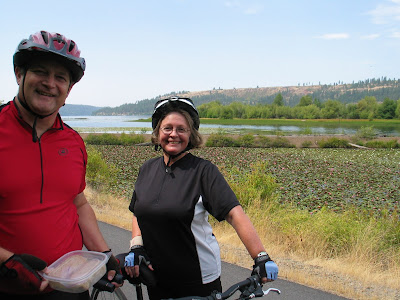 Morning hike in the Redwoods, where it was dark enough to need a flash.
Which may explain our glazed expressions. 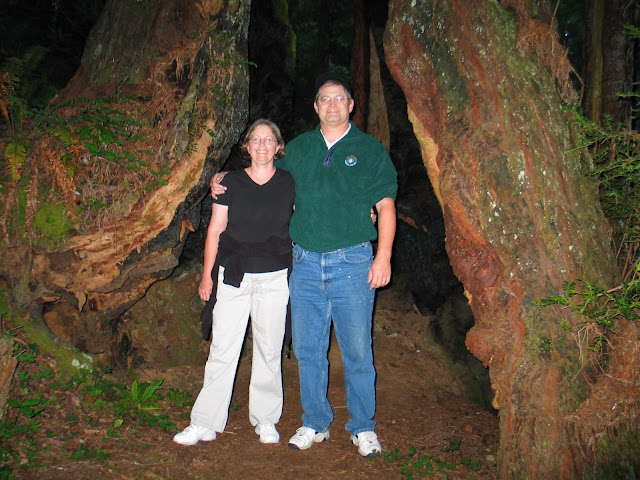 About halfway through the day yesterday I remembered that it was the 26th.
I was leaving for a meeting, so as I kissed Jeff goodbye I said, Happy Anniversary dear!
Oh, right, I forgot.
He seemed rather abashed.
He's never quite recovered from forgetting our 25th, when I had gone all out with a thoughtful present and nice dinner and he completely blew it.
That's okay, I said. I know, let's buy a house for our anniversary!
Good idea, he said.
So we did!

And I am all alone again, naturally, as he is back in Central Oregon after a weekend at home.

P.S. I think maybe the Geisha was at a Bunco party at the B's. Feel free to confirm that fact if you know.
Posted by Sue O at 6:53 PM