On Saturday morning we took a drive down to the south shore of the island, having several possibilities in mind. One of them was a visit to the McBryde/Allerton Gardens, famous gardens of the National Tropical Botanical Garden organization.
Jeff loved driving on Kaua'i. Speed limits max out at 50 mph, and there are not too many stretches of that.
This mile-long tunnel of trees was curious. I later discovered that they are eucalyptus trees and were planted in 1911 as a gift to the community by the Pineapple Baron himself, Walter McBryde. The trees were left over from his own landscaping projects. They were stripped to the bare branches by Hurricane Iniki on September 11th, 1992, but have recovered nicely. You can still see many lasting effects of that hurricane on Kaua'i. 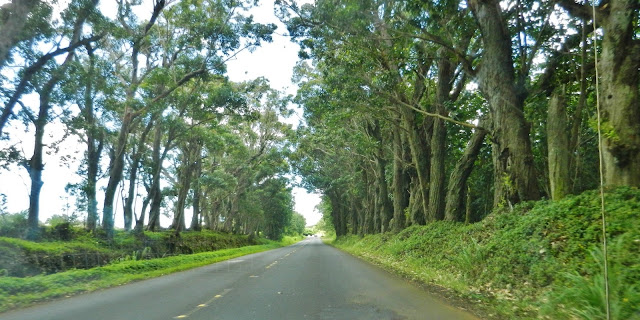 We were unpleasantly surprised by the tour prices for the gardens, but Jeff really wanted to do the three-hour guided tour around the Allerton Gardens, so I gulped and forked over the credit card. Luckily, we had this coupon book  and got a 10% discount.

Tip #2: Pick up and peruse thoroughly all of the coupon books you will see outside stores. They won't save you a fortune, but every bit helps on this expensive island.

We were warned about mosquitoes, and I should have listened, so I picked up my first large batch of mosquito bites in the gardens, thanks to all the water features.

We boarded the bus and listened to the garrulous guide as we traveled down a dirt road to the entrance to the gardens. The air conditioning wasn't working very well and I was not happy. We passed this gorgeous view, the site of the house of Robert Allerton, wealthy heir to the founder of the First National Bank of Chicago. He had a lifelong passion for garden design, sculpture, and landscape architecture, and traveled the world with his gay lover/adopted son, collecting statues for his gardens. 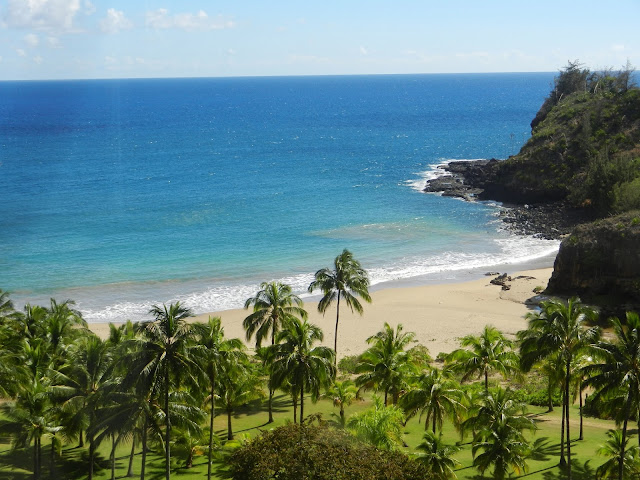 Queen Emma of Hawaii was the original owner of the land, and the McBrydes purchased the whole valley in the late 1900's for a pineapple plantation. Allerton purchased 80 acres in 1938 and spent the rest of his life developing the gardens and pushing for the establishment of a tropical botanical garden on US soil. He witnessed the granting of a charter and the creation of the organization a year before he died.

The gardens are less about rampant hues and more about layers of texture, shapes, and subtle variants of colour. This orchid was an exception. 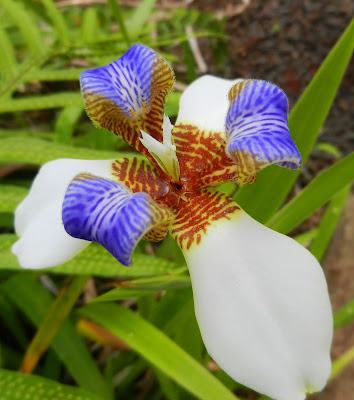 Breadfuit trees line the path. The guide was effusive in his praise of the nutritious benefits of the lowly breadfruit. Apparently, we should all be eating it.
I find most guides to be a bit annoying. They foist their lifestyle, opinions, and often dubious information onto their captive audience, and then hold their hand out for a "gratuity" at the end of the tour. This guy had the temerity to voice his opinion that the Christian missionaries (who, apparently, only prayed on Sundays) had a real nerve trying to tell the native Hawaiians (who prayed to their gods all day, every day) how to be spiritual. Yeah, I made a rather loud comment about that one. 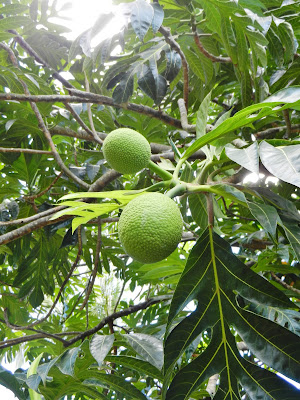 This deer statue was kind of scary. 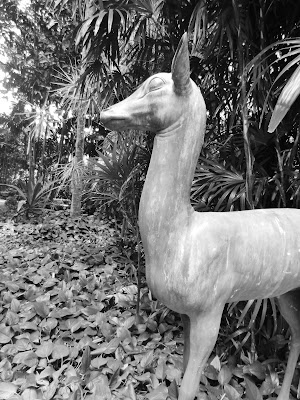 We sampled fruit in the tropical fruit orchard. Jeff is eating pummelo, which was much sweeter than any I have tasted. 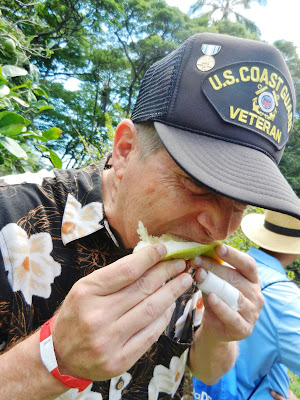 I picked up a few macadamia nuts from under a tree, so I hid them in my little purse and made Jeff crack them open for me later. They are tough little buggers! And only one was viable, but it was delicious. 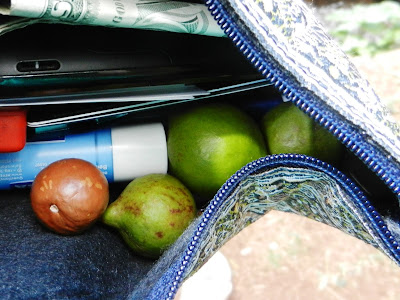 There are distinct rooms in the garden, and you can see the different textures created by plants on the floor, walls, and ceiling.
I will now let the pictures do the talking. 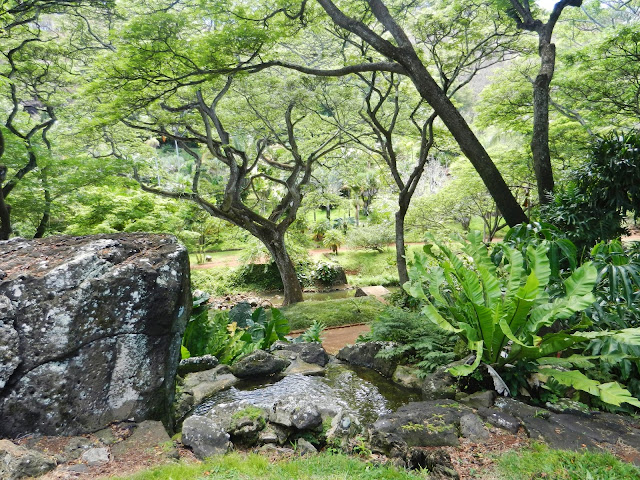 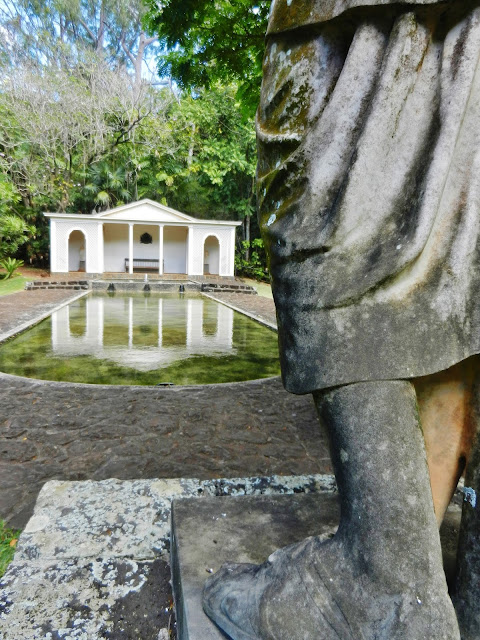 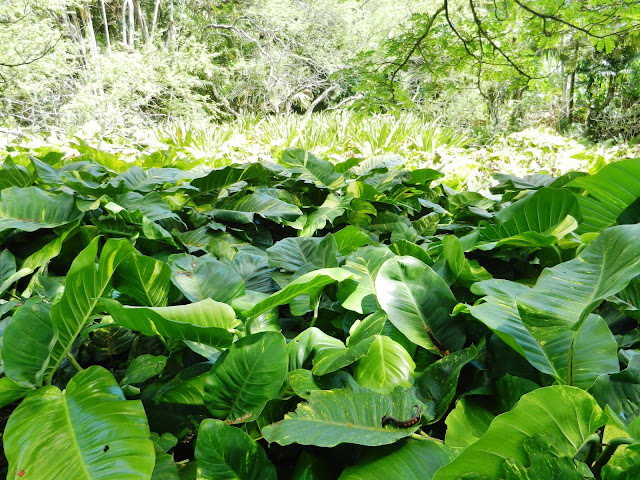 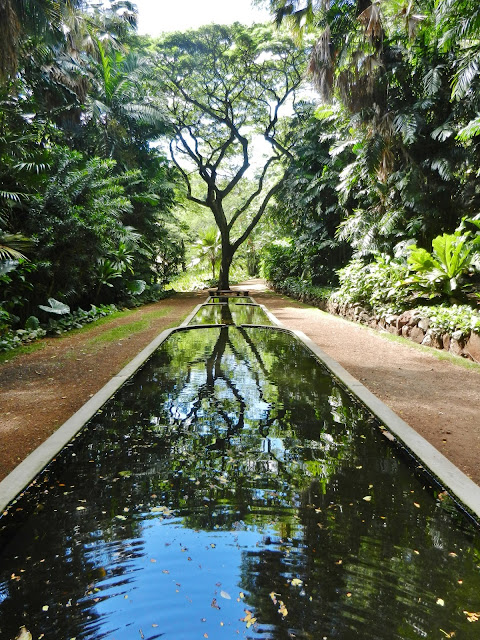 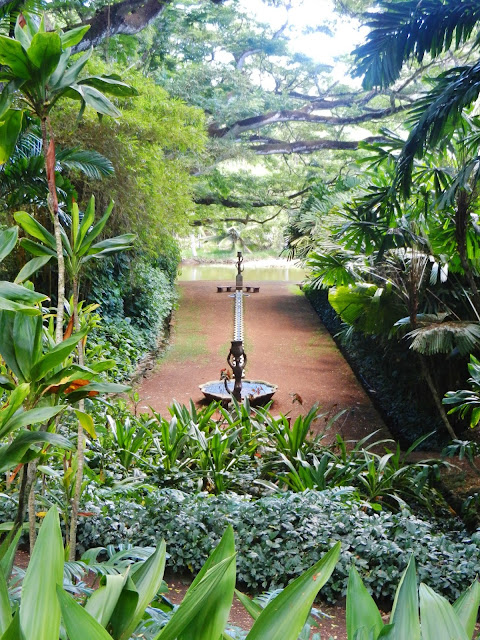 This clumping golden bamboo (which has random green stripes on every section) is spectacular. It grows at a rate of eighteen inches a day. When the wind blows, it cracks and creaks above your head. I would estimate that it was about twenty feet tall. 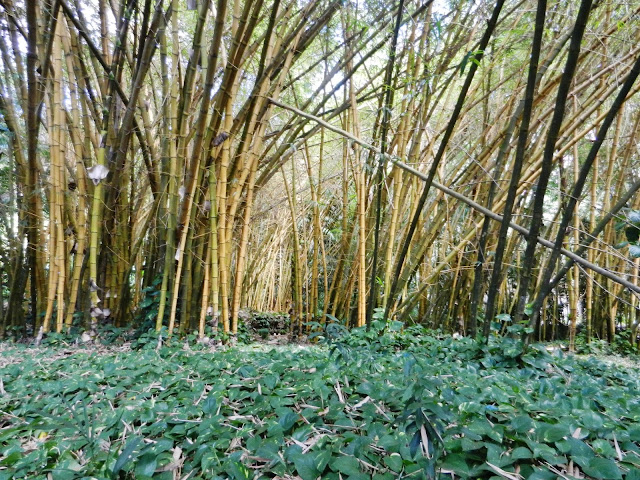 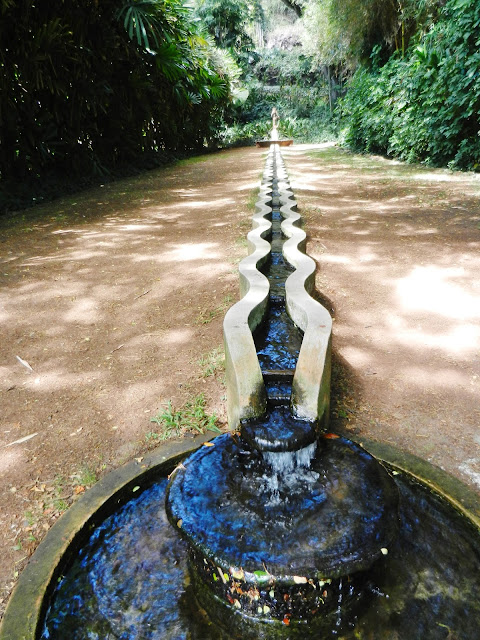 These ficus trees were used by Steven Spielberg in Jurassic park.
I love them, but will only subject you to three of the myriad of photos I took. 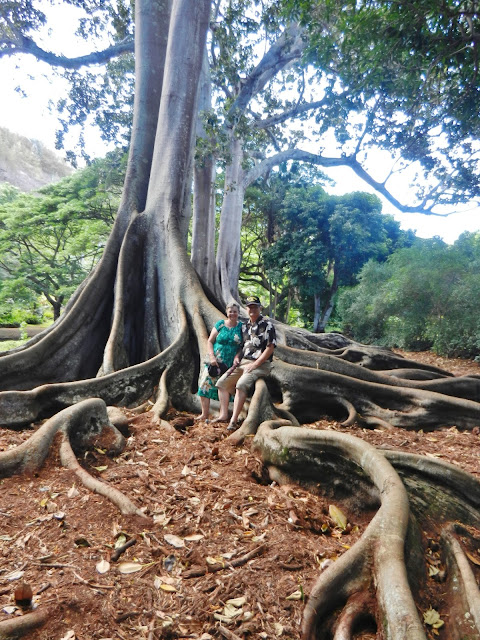 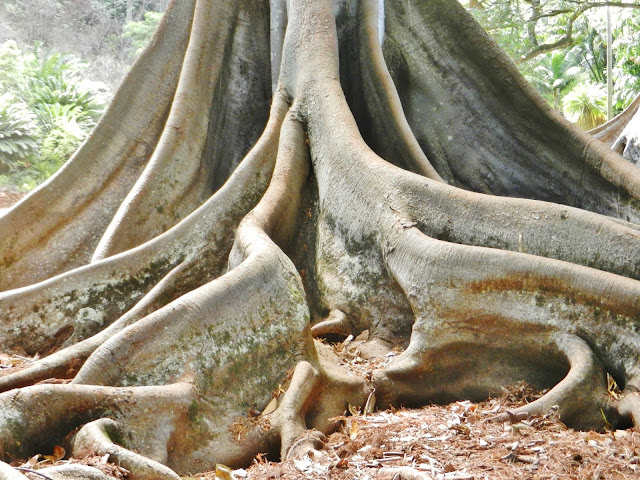 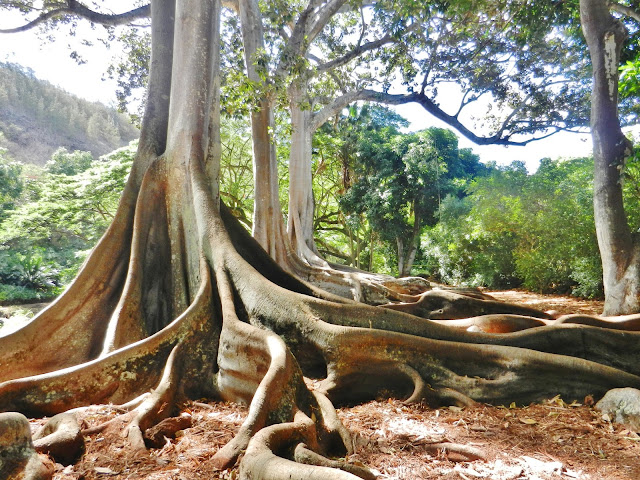 We had planned to do more, but were pretty wiped out by the end of the tour, so we went back to our little nest in the trees.