The temperatures are plunging here in Oregon and snow is predicted.
The wood stove is blazing. 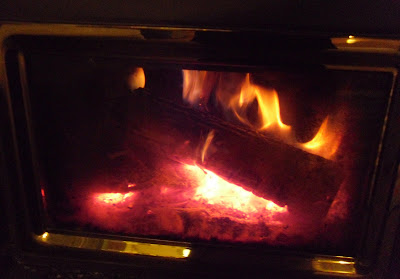 Jeff is watching a movie on the history of the Tea Party movement and 9-12 rally of last year.
Good memories.
Me, I have one eye on the movie and one eye on the computer.
The movie is quite riveting. Maybe I'm partial, because I was there from the beginning. Jeff, my intrepid Mum, and I stood in downtown Newberg at the first Tea Party protest on April 15th last year. The march down Pennsylvania Avenue on September 12th and subsequent rally on the mall still stirs my blood.
It was the experience of a lifetime.

So, catching up on an event of two Friday nights ago, when we had our annual craft night at church. Friend Karen was in charge and she put together an awesome list of projects. I have too many unfinished projects in my spare room already, and we are spending all our Christmas money on travel to Sam and Charlie's wedding, so I took a room and helped people seal up their bulk foods in our pouch sealer.

Sorry kids, no crafty presents from me this year.
They are tearing up as they read this, you know they are.

If all this sounds like a foreign language to you, go here to read a good description of pouch sealing for food storage.

Yes, folks, it was my idea of a good time.
Kenzie was hanging out with me, passing time till Papa got home from his Oregon Patriots meeting. She had many stories to share, mostly about the foibles of her younger brothers and sister. She thinks they are very rowdy. It occurred to me that my little girl will be a teenager before we know it.

Oh, I also made, with a little help from my friends, a lovely wreath for my front door. 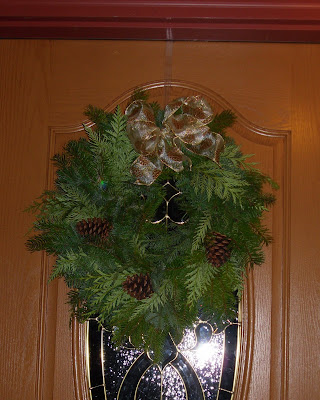 It is a tradition that after the night winds down, the dauntless few who remain to the end descend on Shari's restaurant. In past years that has meant we begin the revelry at about 1 or 2 a.m., but this time it was around midnight. 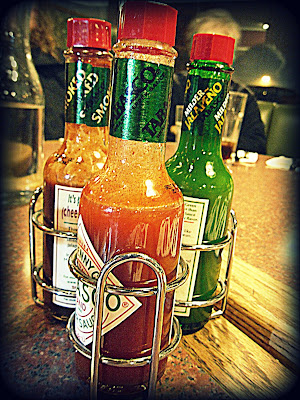 It came to my mind, and I said as much, that it was only six months ago that Karen, Nicole and I were at Dantes on our ill-fated  Christian Kane outing.
Karen said, I suppose you're going to post some more terrible photos of us on your blog.
You can work magic with pictures on Picnik.
That's all I have to say about that. 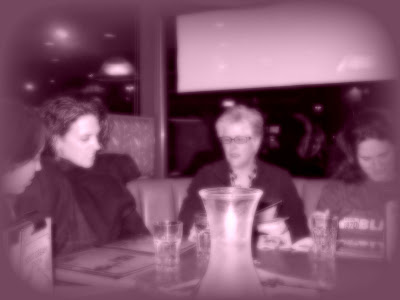 Nope, like this one better. A little focal focus, instead of an all-over soften. 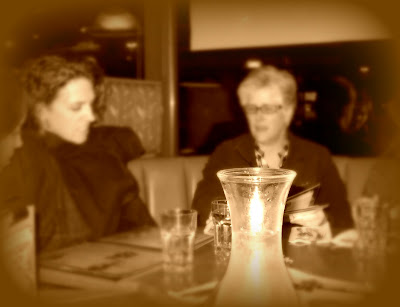 The lovely Lori had lots of pithy and wicked things to say, as usual.
Here she is, being particularly gleeful. 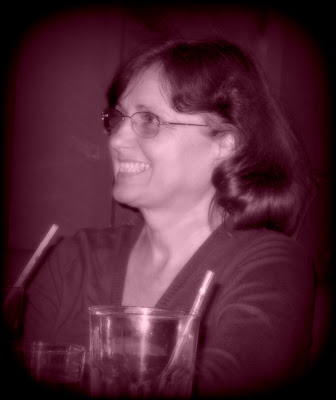 Two more weeks and my covey of cohorts will be attending America's Largest Christmas Bazaar. Whether or not that appellation is factual, the size of the beast comes close to defeating us every year.
Lunch at the biker bar afterwards.
Wish you were here.
Posted by Sue O at 8:06 PM