I've been less enthused than usual about the computer this week.
Very strange.
But I do have a few things to share, some of which may be more interesting to you than others.
First, I thought some of you might like to read the article that was in our local paper about my Haiti trip. If so, you can read it here. The reporter was very sweet and only got a couple of details wrong. I was excited for MamaBabyHaiti to get a little publicity and was a little disappointed that he didn't play that angle up more than he did. On that same note, you will notice a new blog in my Blog List, that of Dokte Sarah. I love her perspectives on the work she and Sean are doing in Haiti.
Haiti is often on my mind. I ruminate on the political conundrum that is Haiti as often as I contemplate the living situation. I didn't really cover the politics in my series of posts, but Lisa wrote about it here and told of an interesting conversation that we had with a Haitian woman on our long bus ride.
Barb and I ran (okay, we walked a little bit, maybe a mile) a 10K on the treadmill on Thursday.
Not my favourite way to spend a morning, but Barb was finishing this ten-week challenge thing and had to complete it by Thursday night. Like a good friend, I went along for the run. Of course, it was raining, so we went to the gym. Typical of the vagaries of our Oregon weather, it was sunny by the time we walked out of the gym 90 minutes later. We felt pretty awesome after we got done, although I was sure I was going to die a few times along the way. We are going to do another local 10K on Saturday. If it's not raining. In which case we will stay in bed.
I will say that running has helped my ankle and foot to be stronger and less painful. I think the motion of running is less stressful for my body than walking because of the limited range of motion in my ankle.
I found these running shoes on clearance on Saturday. Adidas Marathon. Not that I am planning to ever run a marathon or anything. Would you hold me to that, please? I tried them out this morning and the old bod feels so much better for having new shoes. I also find that good socks make a lot of difference for my  short, wide feet. These are some Keen socks I bought on a whim from 6pm. Lovely, cushy, comfortableness. 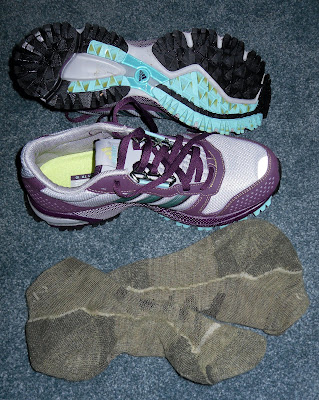 Speaking of marathons and crazy runners, I've also added my friend Brenda's blog to the list. If you're into running, you will enjoy her writing. I think it's a little scary, because I say that I will never want to run a marathon and I'm completely serious. But I also said I'd never run a 10K and I'm beginning to see that it will probably happen this year.
Ack.
And Brenda had better not say I told you so.
And that's enough about running, because I know it's a very tedious topic if you're not into it.
A few other updates on life:
Posted by Sue O at 1:33 PM