I know you're all dying of anticipation, wondering what we did for our anniversary.
Thirty-one years.
Sometimes, it seems like an eternity.
Sometimes, only yesterday.
Nah, I'm kidding.
I can actually hardly remember life before Jeff, although every time I go to New Zealand it all comes back to me. In a good way.
So, here's the scoop.
In excruciating detail.
I planned a long weekend, with the first night being spent in a luxury boutique hotel in Portland: the Hotel Monaco, which was 5th Avenue Suites Hotel until several years ago, when it was transformed into its present state. I found a half-price deal on Travelzoo, which included a continental breakfast but not, unfortunately, free parking.
Let me just say that I do not pay $33 a night for parking. Ever.
We parked in the Smart Park facility a few blocks away, which ended up being $13 for the night, which is within my comfort zone. It was a little inconvenient when we forgot to bring our toilet kit into the hotel, but Jeff just popped out in the morning to get it.
I was delighted by this fellow playing the beat buckets just outside the parking structure.
I put a couple of dollars in his tip bucket and asked him if I could take his picture.
He, in turn, was delighted by the suggestion. 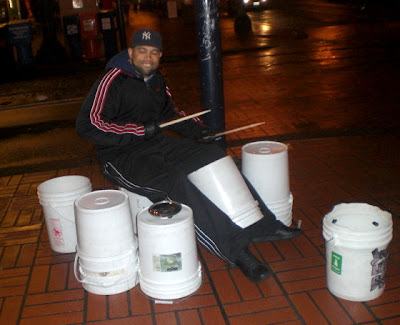 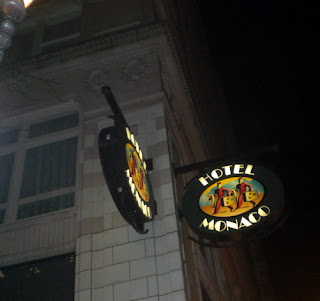 The interior decor is an exotic mix of Anglo-Chinois influences.
Whatever that means. 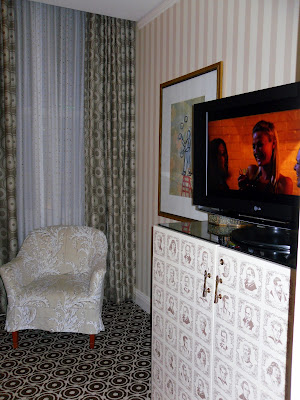 All I know is that this bed with its soft linens and down comforter was incredibly comfortable and, more to the point, so was my pillow.
Because, wouldn't you know, I forgot mine.
But I didn't forget my camera! 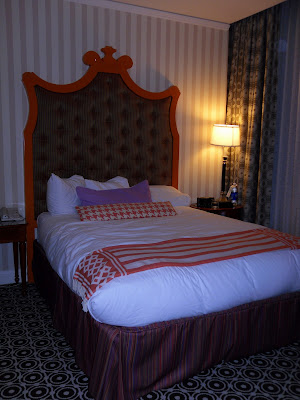 One could request a goldfish for one's room.
Of course I did.
Why did you even have to ask? 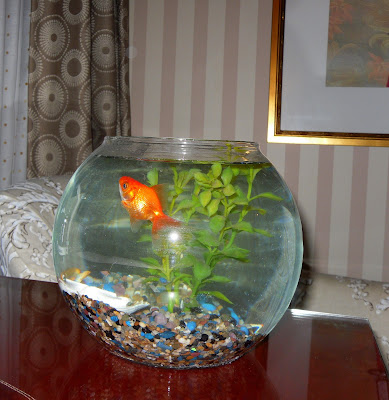 His name is Gillis.
I said so.

Animal print robes are there for the wearing, but we didn't bother.
They were stiff and unappealing.
But aren't they exotic? 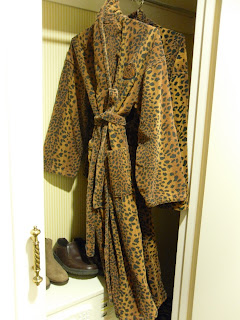 Would someone tell me why these higher-end hotels feel compelled to place a nice large refreshing-looking bottle of water by the side of the bed?
With a sign on it that say "$5"?
It is one of my nightmares that one day I won't see the outrageous price tag and I'll drink it.
Ack! 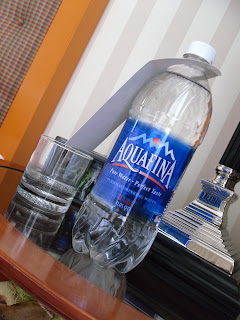 And this sweet bear that was sitting on the bed, with a $35 price tag. 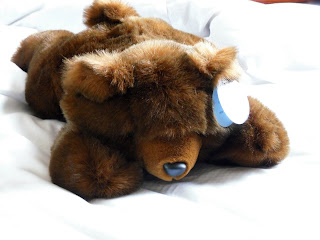 Oh, I forgot to mention, we watched True Grit on the way into Portland.
Fantastic acting, but some of the gruesome scenes are etched into my brain for evermore.
And the ending was crap.
So, if you're at all impressionable, like me, give it a miss.
Jon said, What did you expect from the Coen brothers?
Friday morning after breakfast, we headed up into the West Hills to the Japanese Gardens. The gardens have been almost fifty years in the making and it shows. Every view is gorgeous.
Once again, too many photos, so hopefully you won't be bored by this slideshow. I recommend watching it on full screen, but let it preload some before pressing the play button.
It was beautiful even though the day was grey.
I love the graceful shapes of the bare tree branches.
Because it was such a dismal day, I had to boost the colour and contrast quite a bit on most of the photos. They were very flat and almost monochromatic in their raw state. I'd love any constructive comments from you awesome photographers out there. My little camera is fairly limited in its capabilities, but maybe some pointers on editing?

Tomorrow, the Chihuly Glass Museum in Tacoma.
Posted by Sue O at 9:59 PM