...John Deere, of course!
Every time I see or hear "John Deere", I think of this song.
I love it!
Disclaimer: The photos are cowpucky. Have you tried taking photos of a parade from the third row back lately?
The best Independence Day parade around here is in St. Paul, which is a short country drive (or a medium bike ride) from our house. St. Paul is a tiny town that comes alive every year with the famous St. Paul Rodeo.
The population of St. Paul in 2009 was 449. It is named after the St. Paul Mission. The mission was founded in 1838 by Archbishop Blanchet, who ministered to the Catholic inhabitants of French Prairie. The Catholic Church in the middle of town was built in 1846 and is the oldest building in the Pacific Northwest.
The rodeo is one of the biggest in America, offering prize money of over $500,000 and attracting almost a thousand competitors. The whole town gets involved, volunteering and making money.
The parade, which takes place on the morning of July 4th, is awesome and heavy on John Deere and patrotism.
Thomy and Jon, looking unimpressed by it all, as usual. 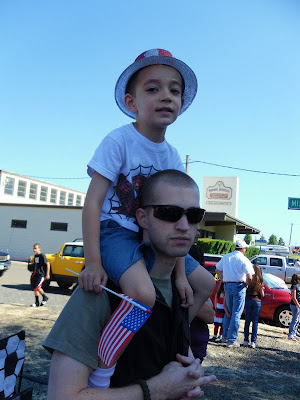 The two Jeffs, having a good time, as usual. 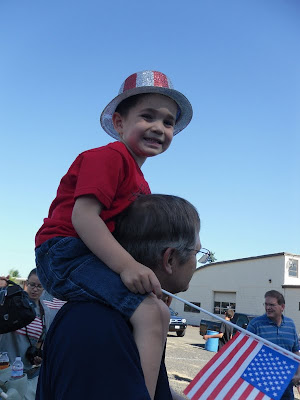 The best drumming group I have seen in a long time.
The Last Regiment Syncopated Drummers. 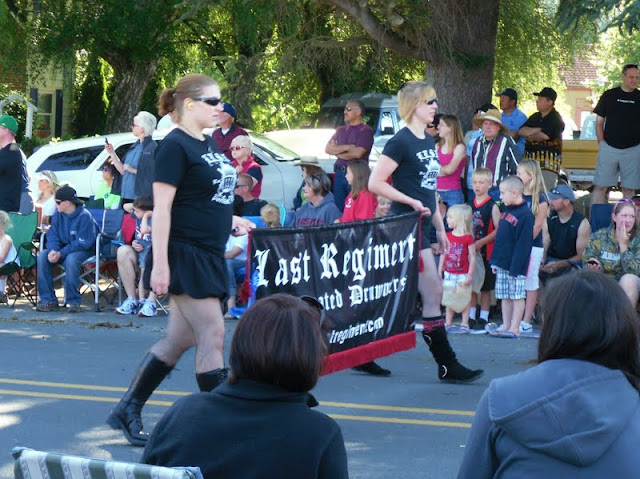 A Goth drumming band.
Some of the participants were more than a little scary. 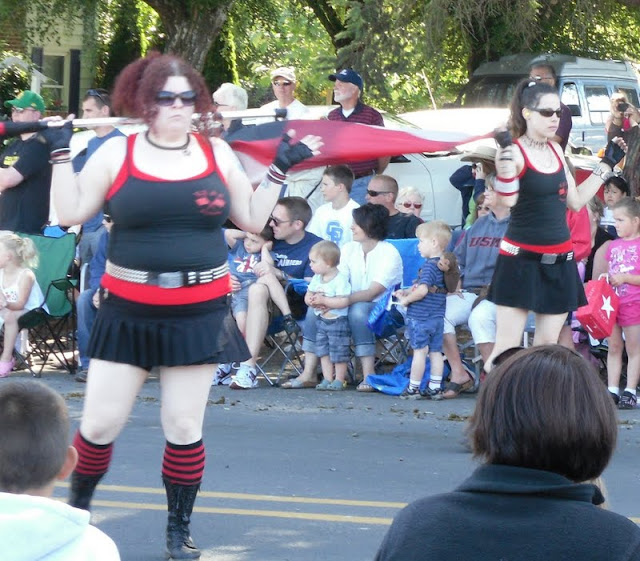 I'm not lying, am I?
The guy with his hand up was somehow directing the group.
I wish I could have watched them for more than the few seconds before they passed.
Awesome! 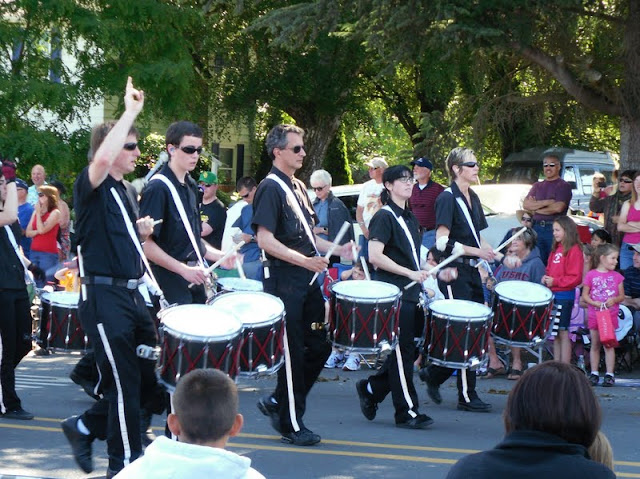 Of course, old Abe showed up.
He's not one to miss a parade! 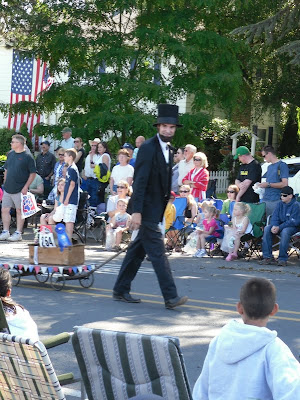 And there were horses galore.
Topped with sheriff-type people... 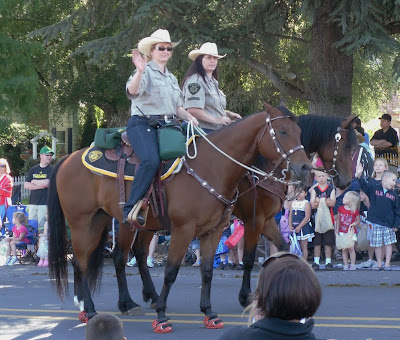 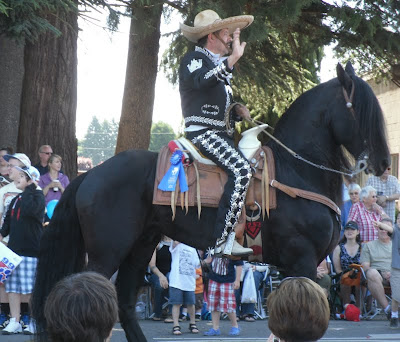 ...and rodeo princesses, only for some reason I didn't get any photos of those...
Insert photo of rodeo princess here
...and pulling wagons. 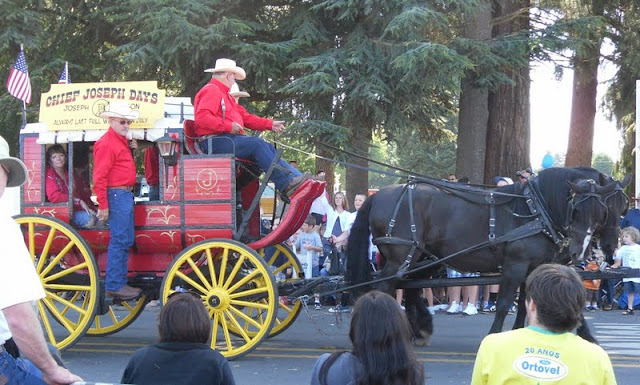 And there was a lone miniature horse, who I just wanted to take home and eat.
Not literally, of course. 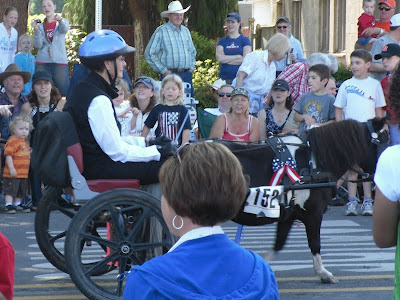 Oh, and don't forget the goats, who had stars upon thars. 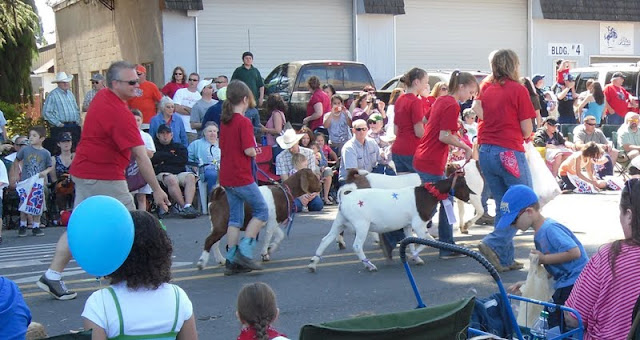 There were classic cars galore... 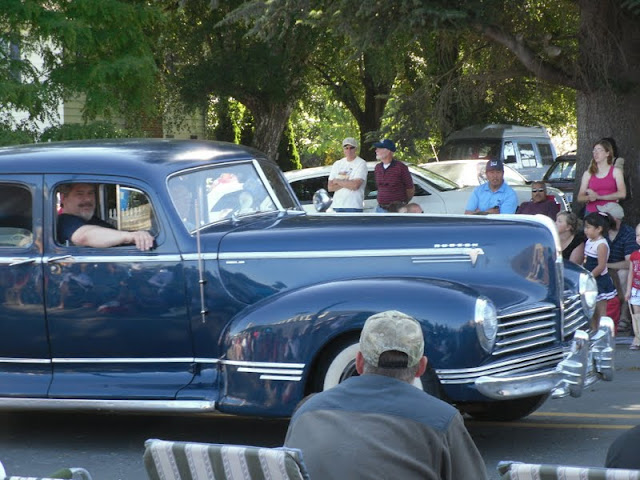 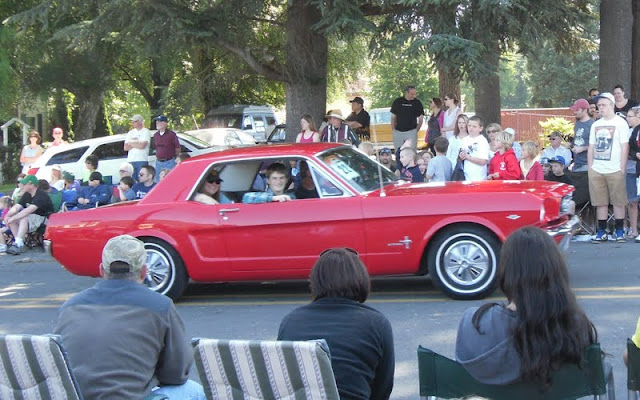 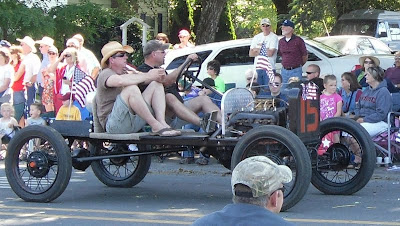 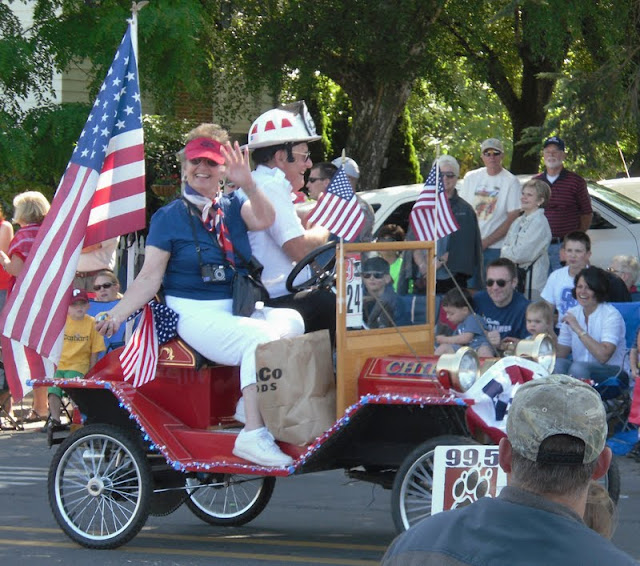 There were enough American-made trucks to make any red-blooded cowboy happy for a millenium. 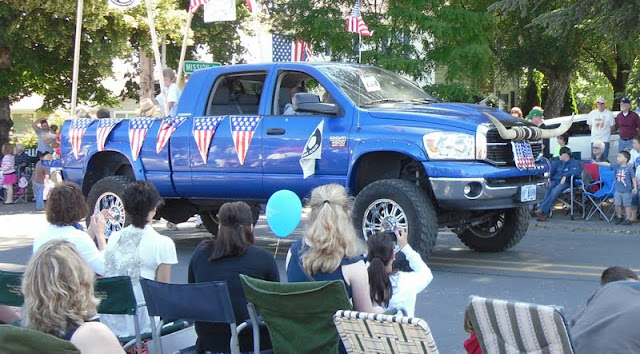 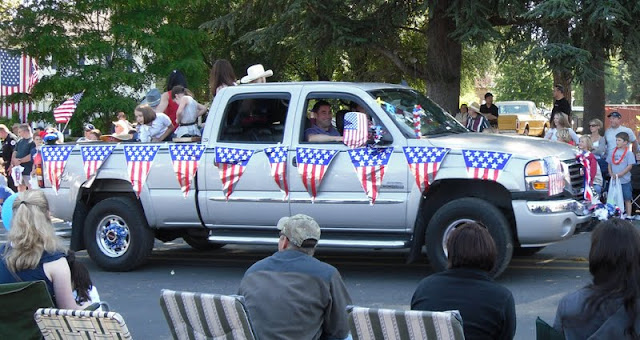 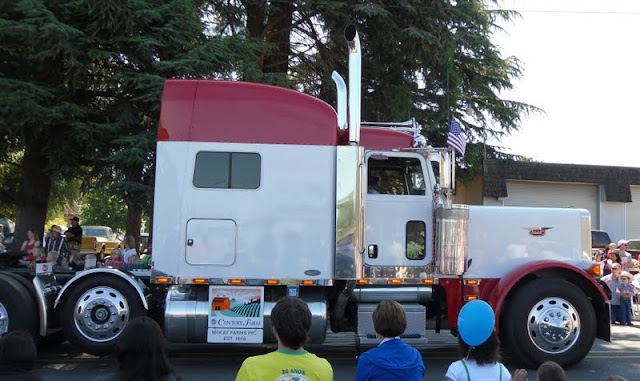 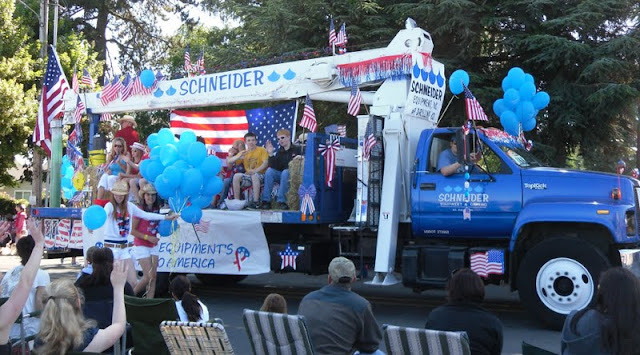 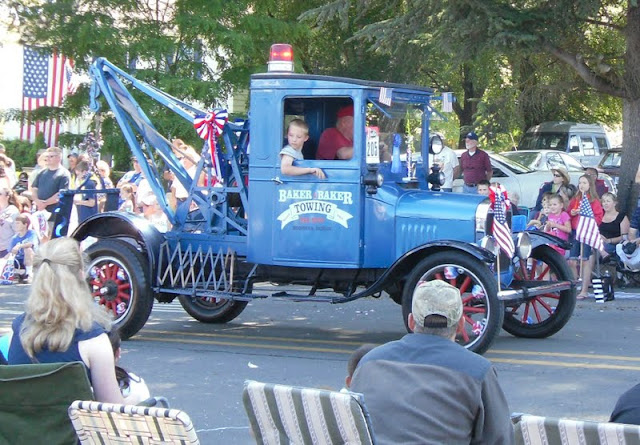 Did I save the best till last?
You betcha.
Oo, I've been dying to say that all day!
John Deere.
The St.Paul farmers looove their John Deere. 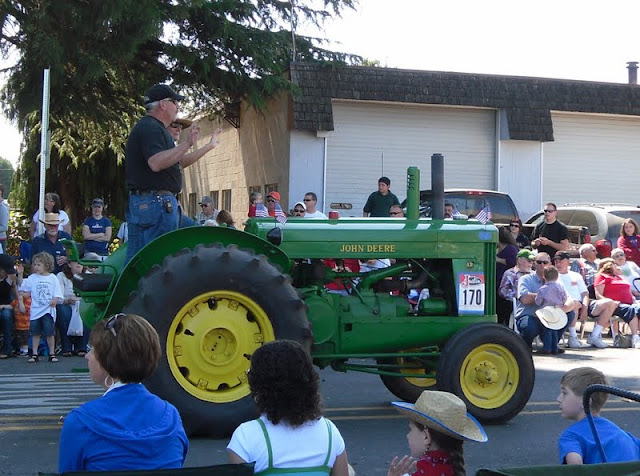 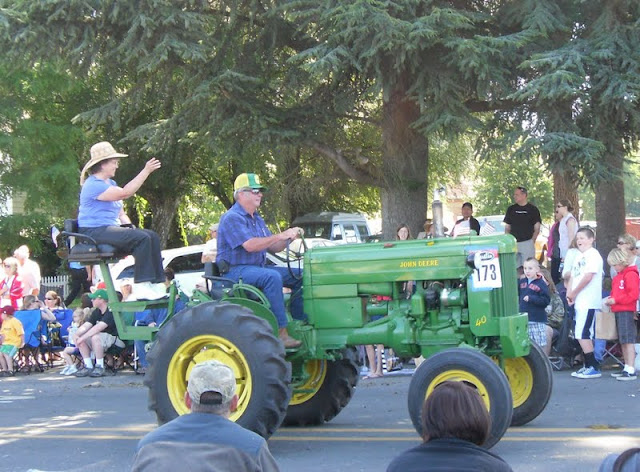 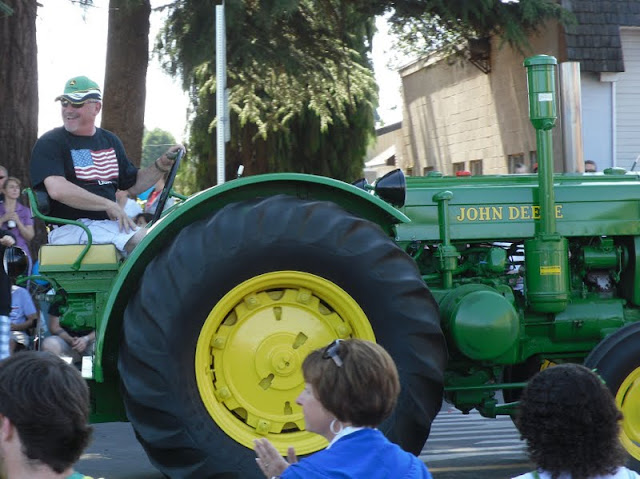 Our houses are protected by the good Lord and a gun
And you might meet 'em both if you show up here not welcome son
Our necks are burnt, our roads are dirt and our trucks ain't clean
The dogs run lose, we smoke, we chew and fry everything
Out here, way out here


We won't take a dime if we ain't earned it
When it comes to weight brother we pull our own
If it's our backwoods way of livin' you're concerned with
You can leave us alone
We're about John Wayne, Johnny Cash and John Deere
Way out here

We got a fightin' side a mile wide but we pray for peace
'Cause it's mostly us that end up servin' overseas
If it was up to me I'd love to see this country run
Like it used to be, oughta be, just like it's done
Out here, way out here
Posted by Sue O at 9:39 PM