More traipsing the streets of London

Here's a cheery song.
I like it.
On Wednesday. we took a Big Bus Tour, in order to see the most amount of stuff in the least amount of time.
And I was still suffering from a mysterious stomach disorder, so walking was not my best thing.
These images are the result. Only problem is, I've forgotten the significance of most of them.
This one, we were told, is the oldest clock in London, but I just Googled it and it is not. So the tour guide must have been lying. 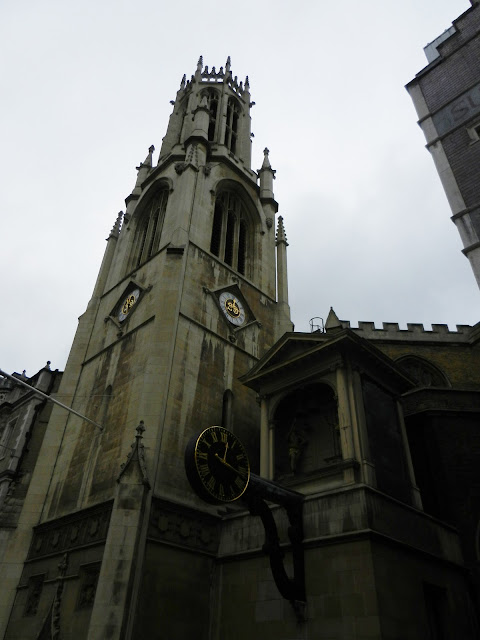 There is lots of building and renovation going on in the city and the structures are always gift-wrapped. 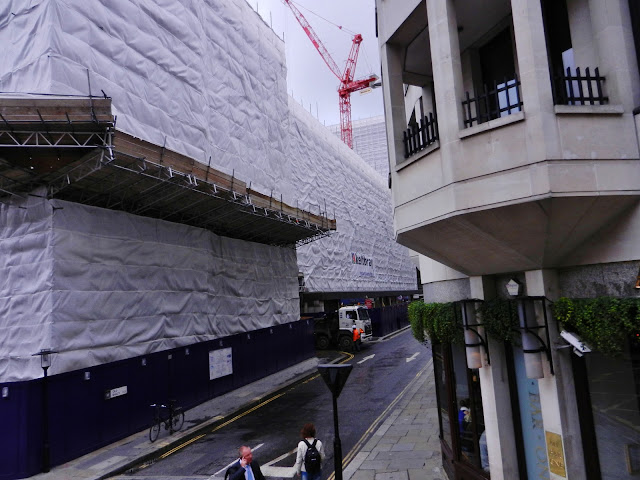 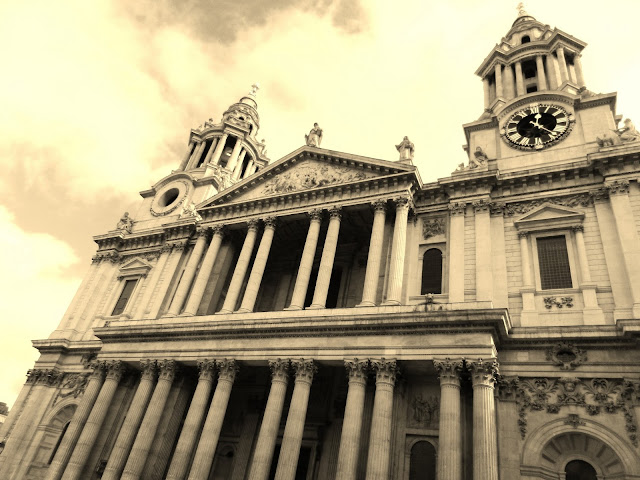 This was as close as we got to St. Paul's. Entrance fees and tourist overload took their toll. 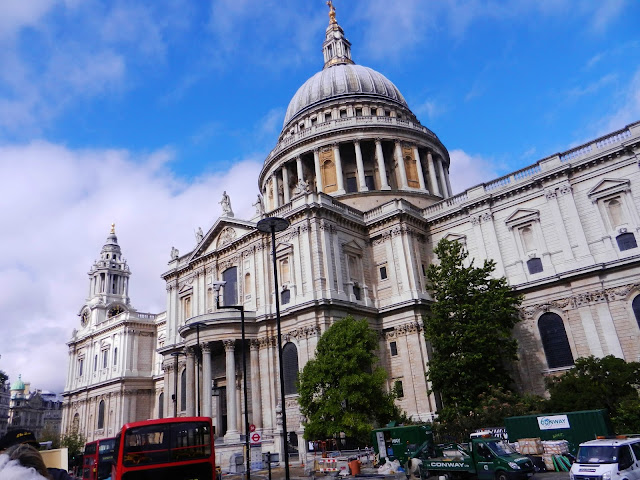 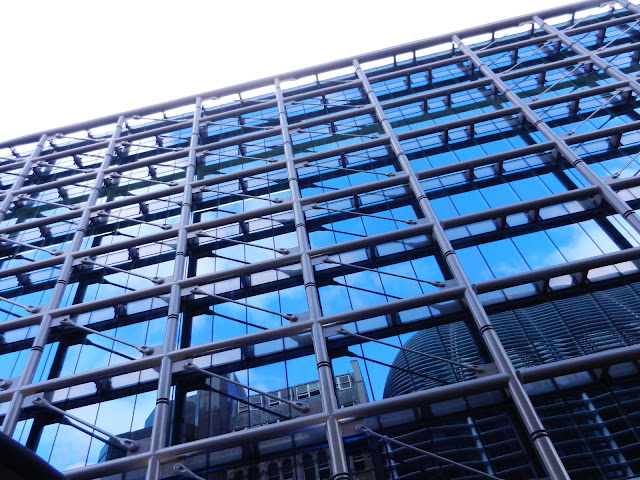 Crossing Tower Bridge. This is often mistakenly called London Bridge, which is the next bridge upstream. 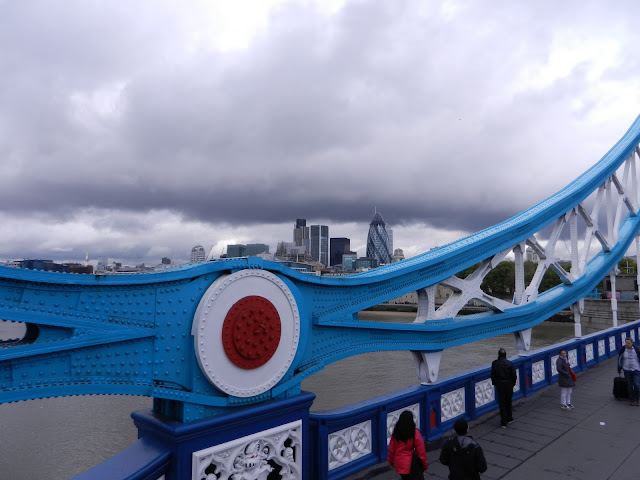 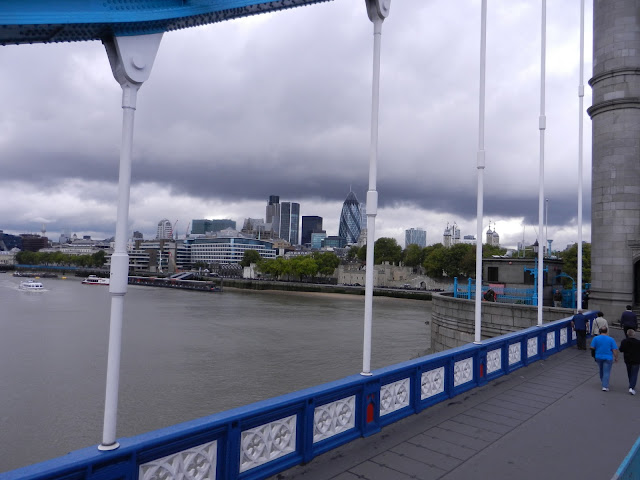 The Tower of London.
We passed on touring this too.
Believe me, you have to pick your poison when you're in this city.
We took a short river cruise instead, seeing as how it was included in the bus tour. 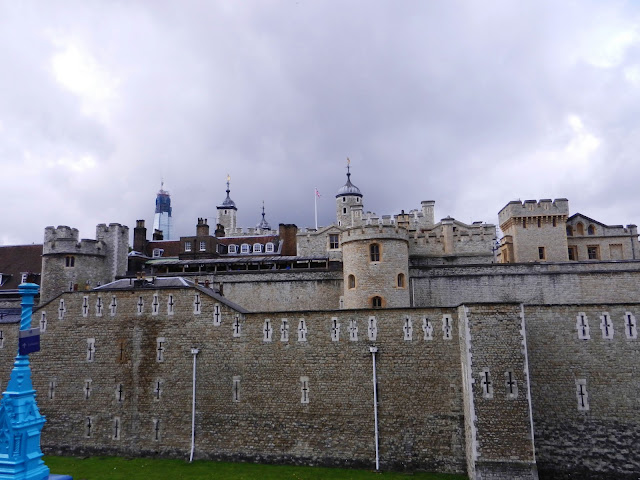 Then a stop at Harrods, to marvel at the prices and selection and not buy anything.
Twenty-five dollars for a pineapple?
I don't think so, Mr. Harrod! 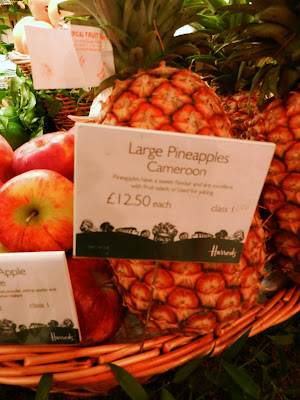 I didn't see the sign on the chocolate display case until it was too late.
Please do not photograph these displays.
So sad, too bad.
Drool on, ladies.
Prices run around $80 to $100 a pound. 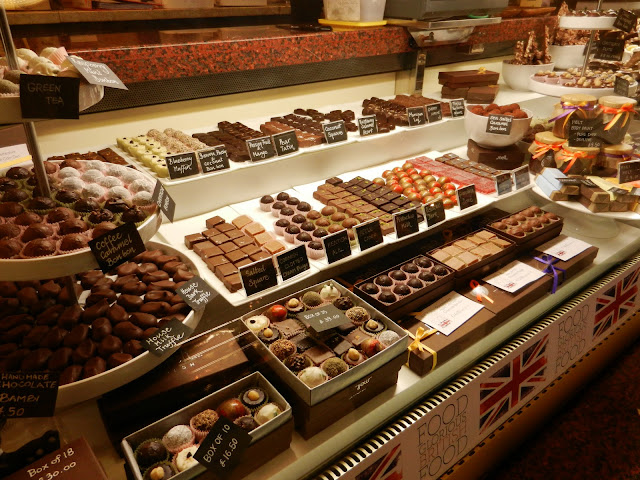 Harrods is famous for window dressings. They were almost impossible to photograph, because of the glare, but you can see this spooky one pretty well.
She had deer antlers on her head. 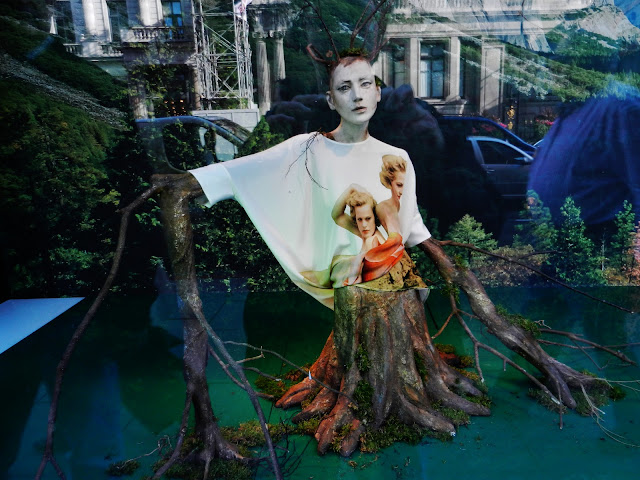 We were hurrying over to catch the river cruise a second time before it ended for the day when we got caught up in this. 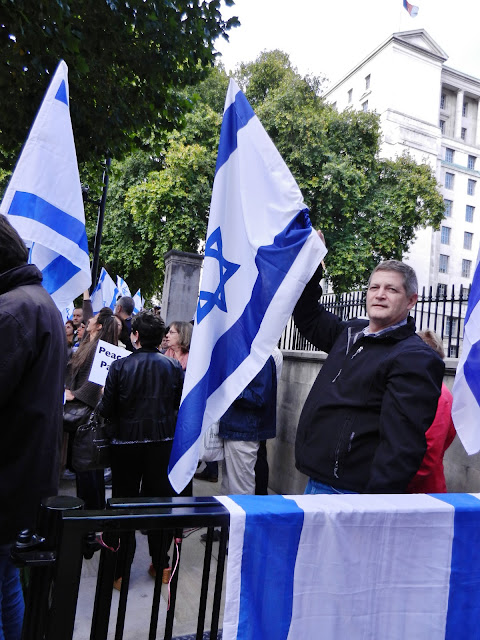 And if you know us at all, you know that we never made it to the river cruise.
We stood with Israel for about an hour.
I tried to claim a flag when we left, but was denied.
Which is funny, when you think about it! 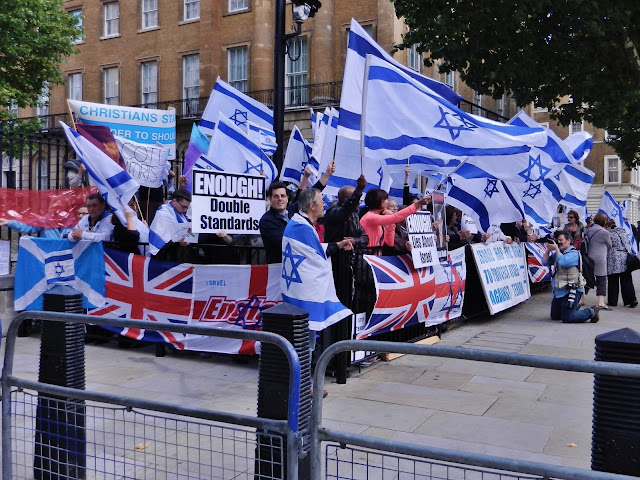 There was a similar group supporting Palestine on the next block, so the Bobbies were everywhere.
One of the Israelis got beat up after a similar demonstration a few weeks ago. 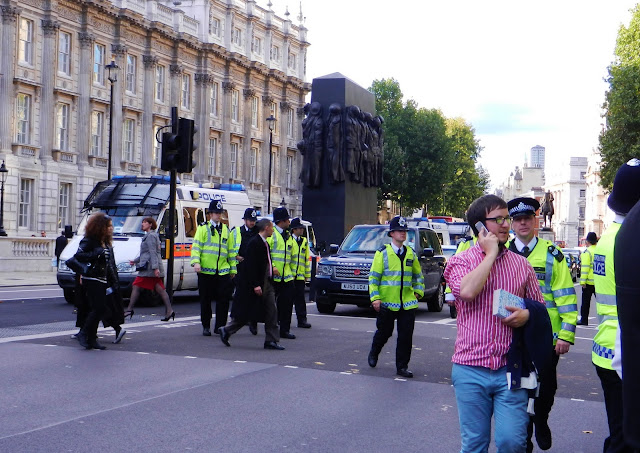 We had wondered why all the police vans were parked in the middle of the street, and then we understood. 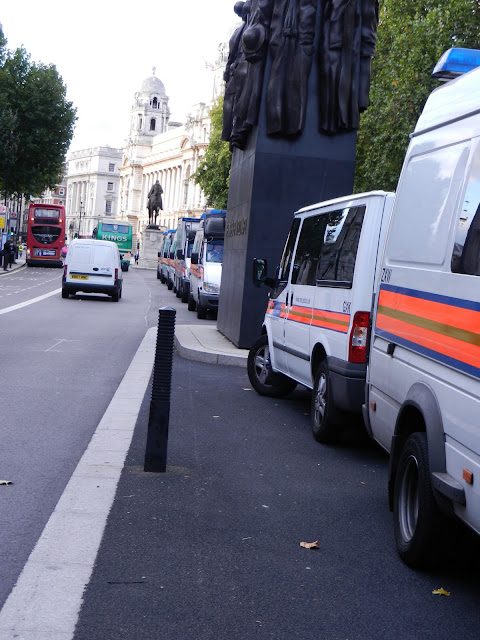 This is the scariest thing we saw in London.
Even scarier than the Jack the Ripper tour.
This person (one day there were two of them, competing for tourist coins) stands on Westminster Bridge and dances to music from a boombox, enticing tourists to have their photo taken with her/him/it.
The mask is supposed to be Queen Elizabeth, I think, but it is icky.
I'm sparing you the enlarged version. 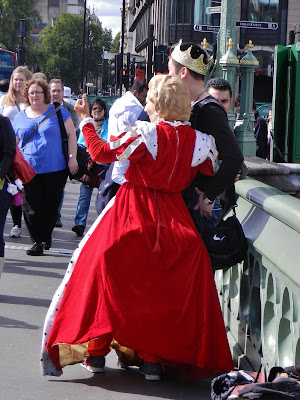 Mwahaha!
If only they knew! 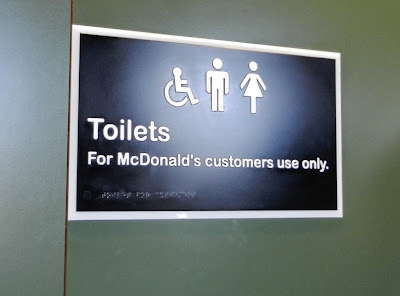 Jeff had been looking forward to his Jack the Ripper tour at twilight. Me, not so enthused considering the state of my bowels, but I went along. We started by Victoria Station and this section of Roman wall, which is almost two thousand years old. 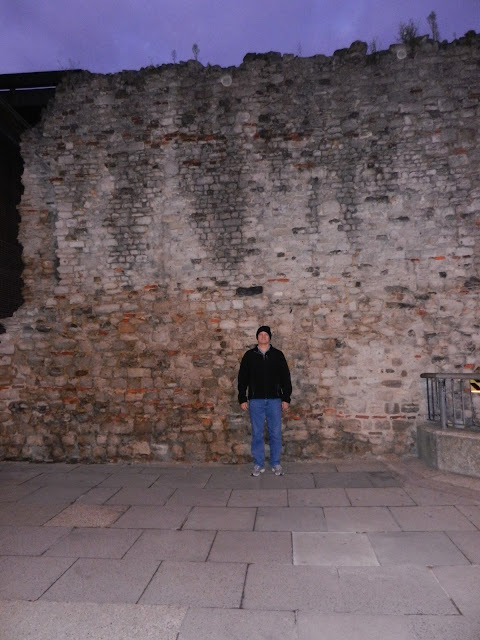 It started drizzling, so after completing the 90-minute walking tour I insisted on refreshment.
We settled on a lime milkshake from Gourmet Burger Kitchen, which, it turns out, is owned by three Kiwis.
Jeff declined to try the Kiwiburger, which had all his favourite things on one bun.
Beetroot.
Eggs.
Pineapple.
'Nuff said!
The milkshake?
It was incomparably delicious.
I want another one. 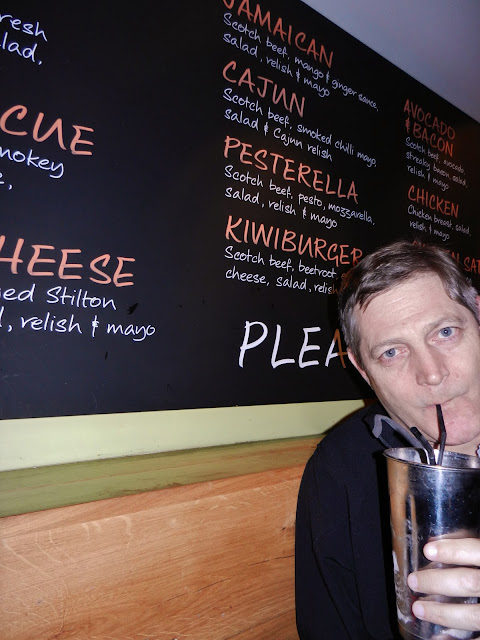 And then we caught the train and walked home in the drizzling rain.
Posted by Sue O at 2:11 PM