Mamas (and daddies) and babies

This is Inocent, whose wife died after she gave birth (not at MamaBaby Haiti!) to their third child. He said she went crazy after every birth and ran away. This time, she didn't come back. He came to the clinic looking for help because he couldn't look after the children and also work, so he had no money for food. He had been feeding the baby sugar water and she was pitifully malnourished. The two older children were not in school and he had nowhere to turn.
Sarah gave him some work painting around the clinic and formula for the baby. He is such a loving Dad and his helplessness in his situation is palpable.
While we were in Haiti, several options were tried and there is hope that he will be able to put his baby in an orphanage for a few months until he can take care of her.
There is hope that his two older children will be sponsored by World Vision through the church of one of our translators and be able to attend school. Sarah already arranged for their schooling and had uniforms made. When the children turned up for school the first day, they were told that the school had run out of money and would be closing. And so it goes in Haiti.
There is hope that he will get a micro-loan through Children of the Promise, the organization that runs the orphanage.
There are no guarantees, only hope. And so he sits and waits for his hopes to materialize.
Here he is, carrying his baby as he walks the dusty roads of Mourne Rouge with his baby in a sling that was given to him by Sarah. 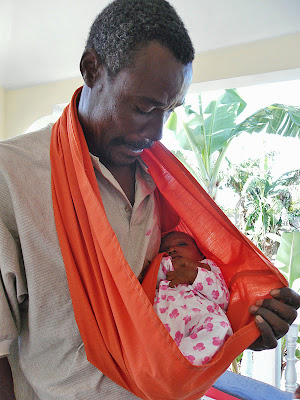 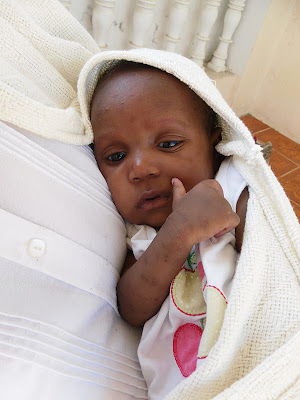 More babies that passed through the clinic during our stay. 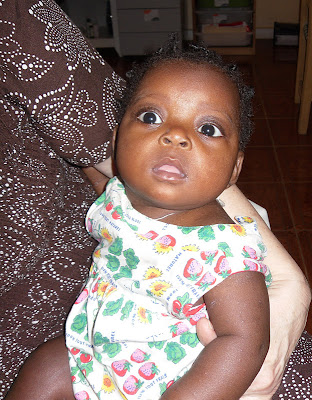 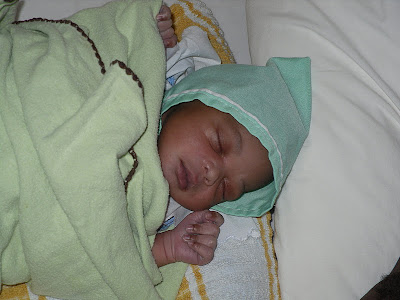 These lucky mamas, who came for baby clinic, were all given baby blankets that were made for MBH babies by some of you! 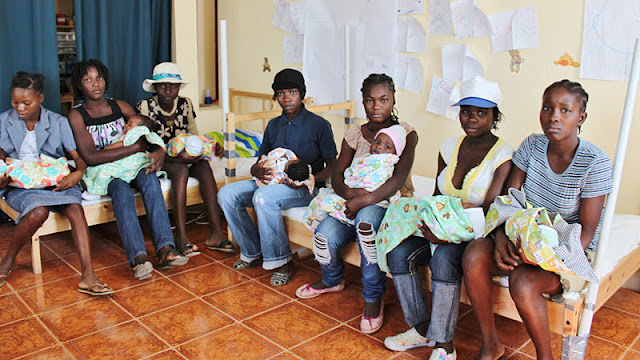 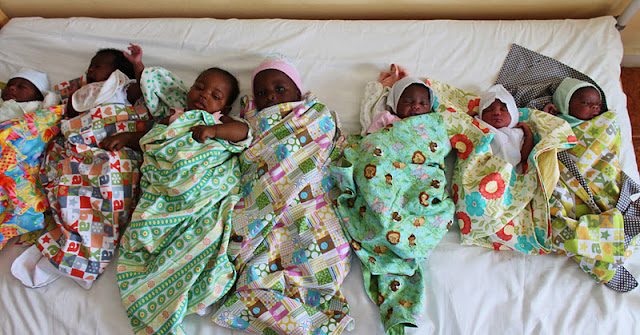 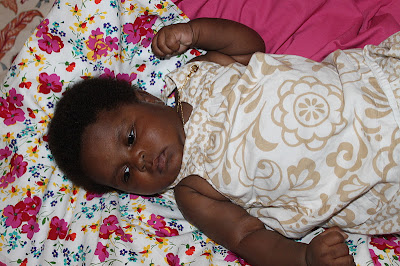 In a later post, you will be seeing our sewing friend. This Mom took her baby home in a sling that was made from two receiving blankets. These slings were a hot item, as you will see, and so helpful to young mothers who carry their babies for miles. 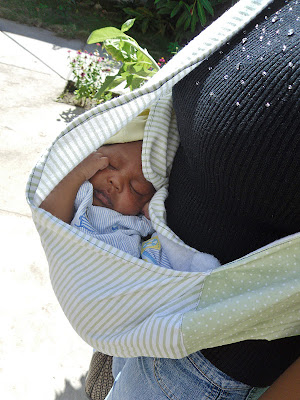 These sweethearts are female twins. Their mother died after a Caesarean section at the hospital. The story involves a couple of falls, a split incision, and a motorcycle, and I never did quite get the whole thing. But the babies are now two months old and dearly loved by their Dad and Aunty. He also cannot work and look after the babies and came to us for help. We tried to get the sisters into COTP but they refused, so the babies' future is uncertain. MBH has been supplying formula and doing what they can to help the brother and sister to take care of the babies. The love is strong, their gratitude is great, but what will become of them is unsure. When I last saw them they said God bless you, and I hugged them and said God bless you back. 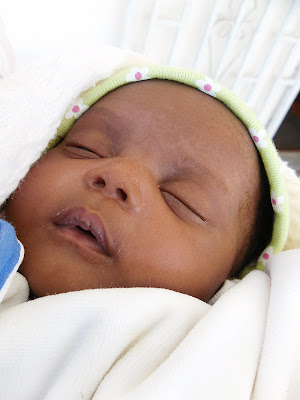 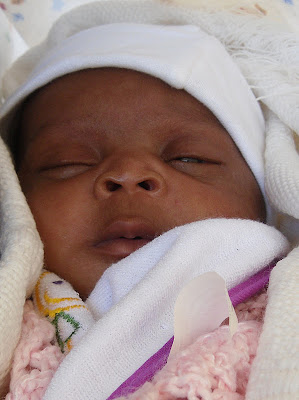 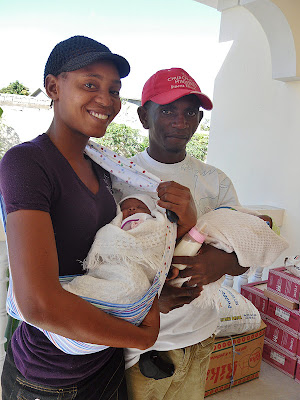 One of Dolly's little friends, of whom she had many. 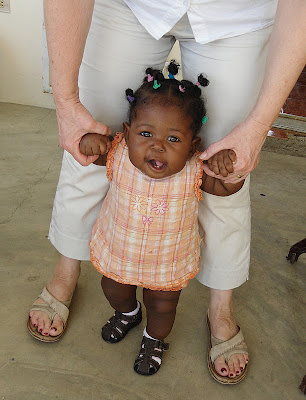 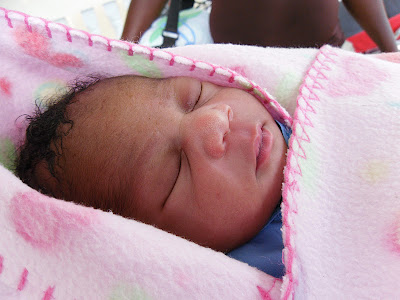 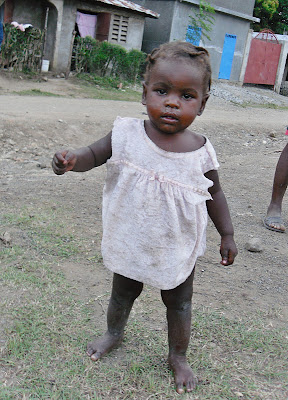 Marie, the Haitian midwife at the clinic, met "her babies" everywhere we went. 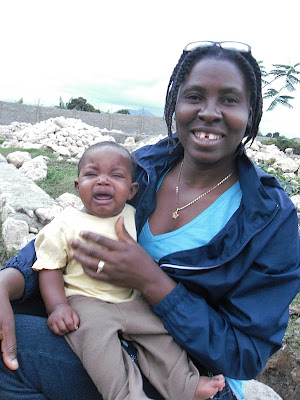 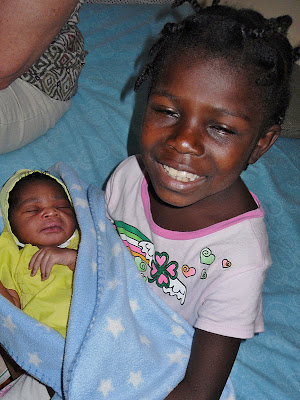 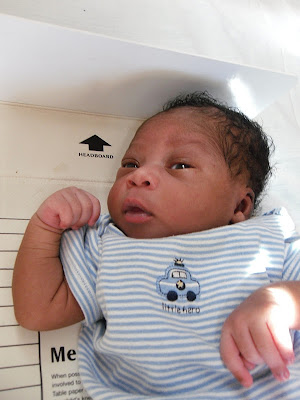 Dolly was sad to say goodbye to this little girl, who hugged her and wouldn't let go. 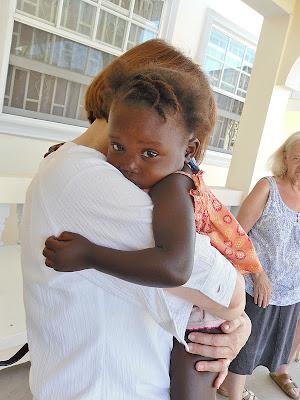 If you have a mind to, please pray for these families. There are many more heartbreaking stories of families divided and fighting for their very lives. Their love and dignity is great, their faith in Christ is strong. It is hard to know how best to help them, but we do what we can and hope that God's grace will fill in the gaps.
Posted by Sue O at 1:46 PM