Jeff and I have been bird lovers for a long time. We spend a small fortune on black oil sunflower seed and Nijer thistle seed every winter to feed our small friends. It's getting to the point that we feed them all summer long too. Mum and I bought two nice sunflower seed feeders for Jeff for Father's day. A little early, but he needed them now, not in two weeks. We were soon rewarded with some resident chickadees, who have been infrequent visitors until now. I love their song and their friendly habits.The photos aren't very spiffy, I haven't managed to get close enough to the birds. I need to spend some more time waiting patiently, but it won't be this week. 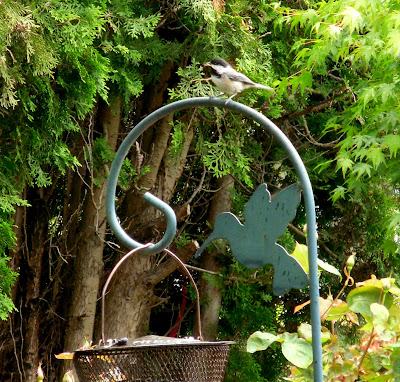 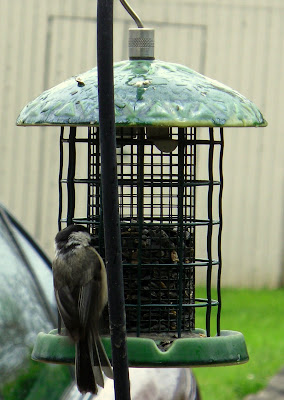 The nicest surprise has been the hummingbirds that are rewarding my planting efforts with some quality time at the coral bells and other flowers in my garden. Here is a cute little guy at the bleeding heart  that spent a long time in the side yard yesterday. 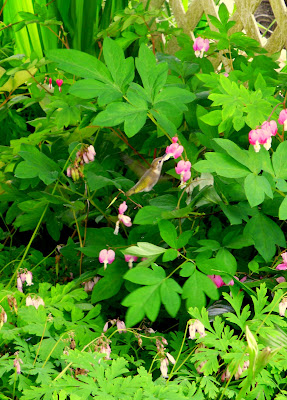 This hummingbird was sitting on some honeysuckle vines which I passed as I was walking to church last night. They look like a completely different bird when sitting and fluffing their feathers out. 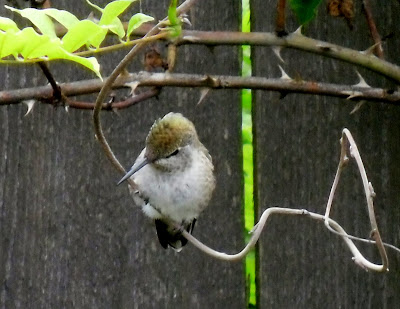 There has also been a hummingbird visitor with a ruby throat that shines iridescently in the sun, on those rare days that we have actually seen the sun.
The ubiquitous blue jays love the sunflower seed too. They are so common here that I almost don't like them, because they have a habit of burying most of their food in my garden, so I have to contend with little nut trees and stray sunflower plants. But my Mum comments on them all the time as if they were a rare species, so I have to remind myself that not everyone gets to see blue jays in their back yard. Or on their mimosa stumps! 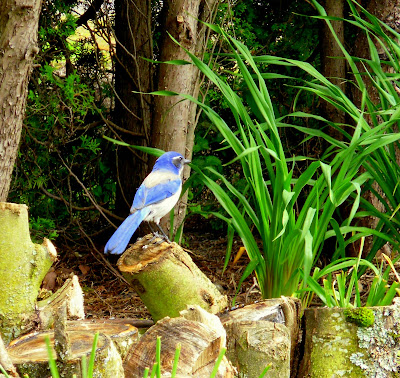 And, of course, the voracious goldfinches that cost us so much in thistle seed. But they are so adorable that we don't even flinch as we raid our wallets any more. 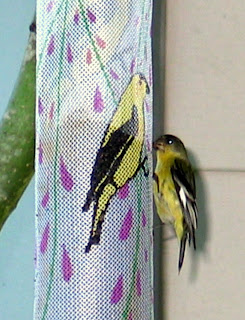 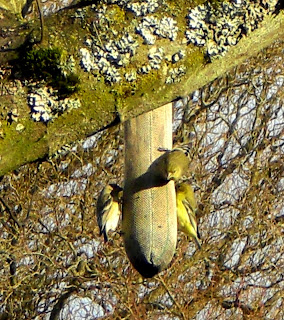 Shoot all the bluejays you want, if you can hit 'em, but remember it's a sin to kill a mockingbird. Harper Lee, in one of the best books of all time.
A bird does not sing because it has an answer. It sings because it has a song. Chinese proverb.
I hope you love birds too. It is economical. It saves going to heaven. Emily Dickinson.
I once had a sparrow alight on my shoulder for a moment, while I was hoeing in a village garden, and I felt that I was more distinguished by that circumstance than I should have been by any epaulet I could have worn. Henry David Thoreau.
And on that note, I will say "Amen".
Posted by Sue O at 8:00 PM