Of Aztecs and didgeridoos

On Saturday, I dragged Jeff and Mum down to Salem to the World Beat Festival. I was a woman with a mission. First, I wanted some new ethnic instruments, and this festival is a great place to buy instruments. Second, I wanted a skirt and blouse that would make me feel pretty and still be comfortable. Plus, I wanted to indulge in some funky world beat music experiences.
So off we went.
The day was a little warm, but quite perfect for the occasion. The venue is the Riverfront Park, which I would love to show you in photos only I ran out of battery. Or rather, my camera did. It is gorgeous, overlooking the wide, flowing Willamette River, which is spanned by several bridges and flanked with trees. I spent some time ogling various offerings from the many vendors. Bamboo outdoor screens and furniture, tatami purses, flowing clothes from India and Africa, garden art and indoor art and instruments galore! I bought four little maracas from Peru and a drumhead from Africa.
Then Jeff said No More Shopping.
What would you like to do? I said sweetly. Listen to music?
Listening to music it was.
First off, the Aztec Dancers.
My goodness, their costumes were astounding, their head dresses extreme. 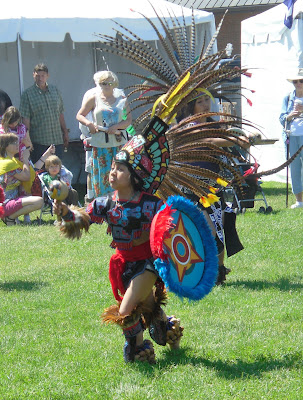 Downright studly, if you ask me. 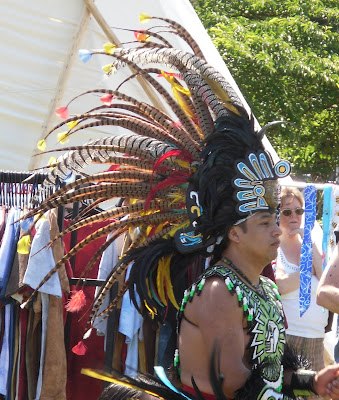 Then we entered the tent where the Zimbabwe Music Workshop was being held.
I have a fondness for music from Zimbabwe.
Marimba bands, don'tcha know?
Plus, I love typing "Zimbabwe".
The great Musekiwa Chingodza, straight from Zimbabwe, accompanied by Bud Cohen, played their mbiras and taught us a couple of "call and response" songs. I had a blast, passing out my newly acquired instruments so that we could jam as well as sing. We sang and sang and played and played, until Jeff had had enough and left to get some lunch. Mum would have left too, but her favourite daughter was still jammin' so she stayed till the bitter end.
I will spare you from the video.
Just know that it exists. 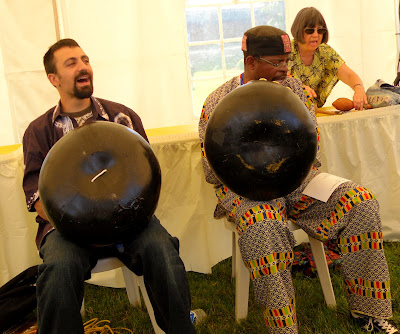 Those big round things are resonators for the mbiras.
Next, to the Asian stage, where these gorgeous young things were getting ready to dance. Mum and Jeff were very taken with them... 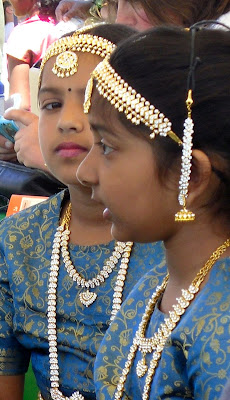 ...and I must admit that I liked the dancing more than I expected.
It is very precise and visually appealing.

I set off to find the didgeridoo.

But I kept bumping into these two.
Yes, those are drawn (tattooed?) stocking lines on the back of her very white legs. 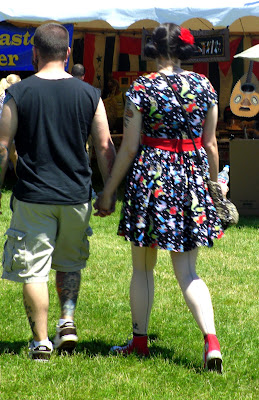 Then I found him.
Ladies and Gentlemen, meet Jake Duncan, Didgeridoo artist extraordinaire.
He was sitting on the grass under a tent, surrounded by four enormous didgeridoos. I was blown away by his playing, I had no idea that the instrument was so versatile. Didge players use circular breathing and can sustain continuous playing for some time. Wikipedia has an entertaining and informative article on the instrument, if you're curious. I sat in the shade and listened to him until he took a break, then I ran off to the next arena to find Hubby and Mum. You've got to hear this, I told them, so they trotted along after me.
Sadly, he ran out of time and didn't play again.
Happily, I had thought to buy a CD before they disappeared.
Jeff was getting grumpy.
Mum was tired and hungry.
I wanted to stay till it closed....at eleven.
Grumpy and Tired won the day, so we went home.
I made them listen to the didgeridoo all the way home.
And I told them that next year I'm going with my friends.
What about the outfit, you ask? 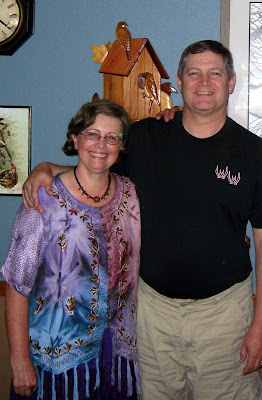 Success is measured in very small doses around here!
Wanna come next year?
Posted by Sue O at 7:04 PM