This may come as a surprise, but Jeff was not the first great love of my life.
In terms of longevity and passion, which would seem to be a reasonable way to assess things, there were three.
One ended badly and is still a bit of a sore point.
The last one, of course, is Jeff.
And then there was my first, when I was sixteen.
His name was David.
We dated for a year and I loved him madly.
He was a guy and I don't know if he was as smitten. There was, after all, surfing and hunting and sports and all kinds of other things to compete for his attention.
So, after 30 years of marriage, is it taboo to talk about him?
Hope not, 'cause here we go!

There are only, as far as I know, two photos in existence of David and me.
He has one of them.
This is the other. 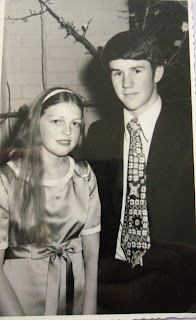 David was a tease and full of the joys of life. I don't ever remember him being mad or moody. He loved the outdoors and working hard and having adventures. At school, he used to help me carry my book bag, which was a sign of true devotion. At Saturday night movies (at our afore-mentioned high school) we held hands, even though it was illegal. I loved his family too, who seemed larger than life to this little English girl. Then, after a year of completely dominating my life, his family moved back to the States.
I was, of course, heartbroken.
For a long time, I used to dream of traveling to the States to visit him, but this was 1972 and the dream was far out of my reach.
We wrote for a few years, passionately at first and then not so much. I loved others and so did he.
Then, in 1976, my best friend and I came over to the U.S. David was serving a mission in San Jose and I spent a day with him. We had become friends, which was the best surprise of all!
A few more years went by and we ended up marrying within three months of each other.
Fast forward 30 years.
I often wondered what became of David but no one seemed to know. Then I found out he had moved back to Vernal, his home town. When Mark and I decided to visit our friend Debbie in Vernal, the temptation was too much. I did a little research (everyone say, all together, ZABA SEARCH!) and found David's address and phone number.
Scary thing, the internet!
It took a few days to pluck up my courage, but Wednesday night I called him.
His wife answered the phone and was as pleasant as could be. She said he was out but that he would call me back.
I didn't think he would.
Then, Thursday night, when I had just about given up, the phone rings.
It was he.
He was tickled that I called, having had no idea of where I've been for the last 30 years. He invited us all to stay with them when we got to Vernal.
So we did. 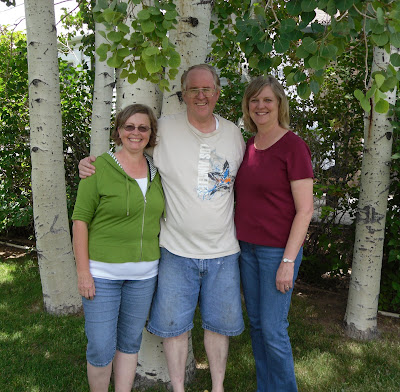 Yes, that is me, with David and his delightful wife, Cathy, forgetting to suck in our stomachs.
We spent many hours reminiscing...
...about the time David fooled me into thinking he was giving me an opal ring for Christmas. When I opened the box (after an almost sleepless night, due to great excitement) and read the little note that said "Ha ha, fooled you!" I was so mad that I hardly spoke to him the rest of the day, even after he gave me a beautiful opal necklace.
...or the time he lied to me about his birthday and I planned all kinds of special things and it was the wrong day. And month.
...or when we rode out to Pirongia on motorbikes and he inadvertently left me there.
Yes, he did come back to get me upon discovering that I wasn't at home, but it was getting dark and I was in tears. And mad. Even though it was mostly my fault.
I told him how embarrassed I am, in retrospect, of how hard I sobbed in the back seat of our friends' car on the way back from the airport when he left. All 90 miles. He said, Yeah, my shirt was sopping wet!
We pored through our yearbooks and I filled him in on all the scandalous doings of our mates from school. Made us feel quite boring, comparatively speaking.

When I commented that David is the only boyfriend with whom I remained friends, he said, It's because we never broke up.
I said to Cathy, That was so generous of you to offer a room to your husband's old girlfriend.
Yes, she said, I dare not tell my girls, they'll think I'm crazy!
Only a woman secure in her husband's love could do that, don't you think?
And do you know the finest thing of all?
Absolutely the most outstanding thing?
Cathy and I are kindred spirits.
We have so much in common that it is eerie, from being piano teachers of like styles and our ten-year-old hysterectomies to our similar hobbies and food tastes.
She is, however, much nicer than me.
She is also a very good Bishop's wife.
Cathy wants to come and visit me in Oregon.

So, I don't know, is all this weird?
It felt more like serendipity, which is my most favourite thing in the whole world.
And just in case you're wondering, Jeff is okay with it all.
I think.
But he never reads the blog, so I guess it doesn't matter!
Posted by Sue O at 4:33 PM