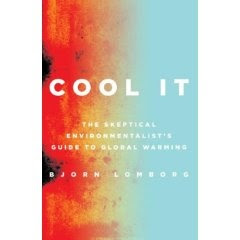 I love this book.
I also love this planet.
But I refuse to be swept up in all of the environmental hysteria that is promoted by media and Hollywood types and, dare I say it, liberals.
This book is the least hysterical, most rational consideration of the topic of global warming that I have come across.
I am now about to plagiarize the Google Book summary:

A startling book that reshapes the debate about global warming and offers a moderate approach to meeting its challenges.

Bjorn Lomborg argues that many of the elaborate and expensive actions now being considered—the Kyoto Protocol, for example—have a staggering potential cost of hundreds of billions of dollars, but, ultimately, will have little impact on the world's temperature. He suggests that rather than institutionalizing these programs to “cool” the earth's temperature 100 years from now, we should focus our resources on some of the world's most pressing immediate concerns, such as: fighting malaria and HIV/AIDS, and maintaining a safe, fresh water supply. And he considers why and how this debate has developed an atmosphere in which dissenters are immediately demonized.

Bjorn Lomberg has been named on numerous "most influential" lists and is a political scientist and statistician. Almost half of this book is dedicated to source citations. His arguments make so much common sense, no matter where you stand on the issue. If you care at all about this big blue planet, I highly recommend you check this book out of your local library. It is thoroughly readable; the section on Polar bears alone is worth the effort.

Tell them your friend Sue sent you.

P.S. I just discovered that you can preview the book (as in "read almost the whole thing) here.