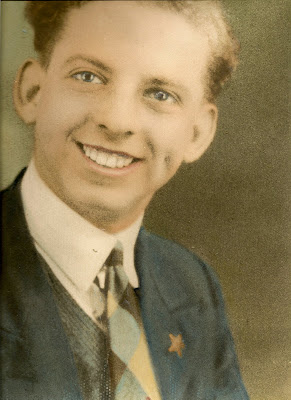 In the spirit of Memorial Day, which seems to be lingering a bit this year, I thought I would post a slightly modified version of a speech that I gave in a speech class a few years ago. My Mum has been working on her stories for me and it's been bringing my Dad to my mind a lot. I count him as my hero.

My Dad, Herbert Thomas Wilson, known as Erbo to his family and Tom to his friends, was a happy person. It seems that he was always this way, as his teachers mentioned it in his report cards and his siblings always spoke of it when asked for their recollections of him. He was one of thirteen children born to poor parents in the city of Birmingham, England. He left school when he was fourteen and I believe he worked for a greengrocer, delivering groceries. Most of his meager paycheck was given to his mother to help support the family. He went on to become a plumber’s apprentice and that became his life’s occupation.
Because of his happy disposition, I suspect he was a favoured child. His sister says in her written memories of World War II, “Your Dad came home from school one day and said he was going to be evacuated to the country. He didn’t ask if he could go, he said he was going, and I don’t think the rest of us would have got away with that, because it meant he had to have new things to take with him. But he had a mind of his own, and off he went!” And his younger brother had this to say. “Erbo was the only one in the family to be evacuated. I think the rest of us kids in the family must have been expendable.”
Dad met his beloved wife, Elsie, when he was about seventeen. Once again, his brother tells the story best. “Erbo’s mates used to call for him to go dancing on a Saturday night. They would be all dressed up in their best clothes with their hair all plastered down with Brylcreem. They used to go to Barford Road School dance. That’s where (he met Elsie).”
Dad also was smart. He could build anything as long as he could get a good look at it. He used to get up at 5:30 every morning and get to work early to labour on his projects. He built wheat grinders, woodstoves, and even a tandem bike. He won prizes for his chrysanthemums, and his tomatoes were the best you’ve ever tasted.
Dad was always one who followed his dreams and he was forever looking for a better way of life. That led him to join the LDS Church when I was seven and later to move his family from England to New Zealand, without knowing much about the country or even where we would live. He was the only one of his siblings (merely eight of whom survived childhood) who ever left Birmingham. Can you imagine selling almost everything that you own, packing up the rest of your possessions, traveling on a ship for five weeks, and landing in a country where you knew no one? In the 1960’s, not the 1850’s! I call him and Mum my own pioneer stock!
Dad died at the young age of 49, shortly after retraining and working as a locksmith for just one year. I regard my Dad as the most intrepid person I have ever known, and his example inspires me to consider my own aspirations to be reachable. I was 50 years old before I became a music therapist, but my Dad taught me that we can all be pioneers in our own right; we all have the resources to follow our own dreams if we are just willing to make the requisite sacrifice.
Posted by Sue O at 2:08 PM