A teardrop for fallen Americans 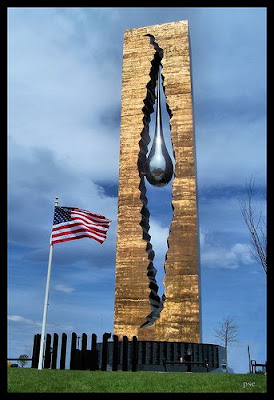 This is an interesting bit of little-known history that my friend Brenda suggested for a post.
Heck, I'll post anything if a friend cares that much about my blog!
But this is worthy in its own right.
Read this excerpt from the official pamphlet on the monument.
(If you want to read the whole thing go here.)

“To the Struggle Against World Terrorism,” was conceived as the events of 9/11 unfolded and Russian artist Zurab Tsereteli walked the streets of Moscow. Struck by the outpouring of grief he observed, a memorial with an image of a tear formed in his mind. Shortly after the attacks, Tsereteli visited ground zero and looked to New Jersey’s waterfront for an appropriate site for a monument honoring victims of the World Trade Center terrorist
attacks.
Bayonne was a fitting location; the city was an arrival point for many New York City evacuees on 9/11, a staging area for rescuers and offered a direct view of the Statue of Liberty and the former World Trade Center towers.
A gift from Tsereteli and the Russian people, the memorial is made of steel sheathed in bronze. Standing 100 feet high, its center contains a jagged tear. In it, hangs a 40-foot stainless steel teardrop, representing sadness and grief over the loss of life, but also hope for a future free from terror. Etched in granite on an 11-sided base are the names of the nearly 3,000 killed in the 1993 World Trade Center bombings and terrorist attacks on Sept. 11, 2001.

According to the caption on the above photo, which I found on Flickr: There are no signs leading you to find this remarkable monument. The walkway is lined with stones donated by those in remembrance of this day. The site is directly across from the Statue of Liberty, and looking at that skyline, you truly do see what's missing.
Posted by Sue O at 10:53 AM