Sue: Today, you are privileged to hear from my Southern friend, Jenny.

Only two things you need to know about Jenny:
1. She is never short of entertaining words. You would love her blog. Because you love me. And we are peas in a pod.
2. She loves Johnny Depp. Inordinately.
I've been a fan ever since I first read her blog a few months ago. When I went to visit Annie, I took a little trip down to South Carolina to visit my new buddy.
Jenny, this is for you.
I think you should make it your ringtone!

Jenny: I've learned the hard way that friendships formed and maintained primarily via Internet, no matter how much they may be based on common interests, don't always work out when they move from the cyber-realm to "real life."

Whatever that is.
After all, there are those who misrepresent themselves on their blogs and on web sites. I guess it's easy to do when you figure the chances of a reader meeting you in person are relatively small.
But from the first time Sue Osborne commented on my blog -- just this past summer -- and I consequently became a regular reader of Nostalgic Nana, I discovered to my delight that her blog writing was unfailingly and refreshingly honest.
There is sentiment and patriotism and obvious love of the things that truly matter, but without the sugar-coating that besets so many home- and family-oriented blogs.
Because its multi-talented author is a fellow conservative and patriot, well-educated and a God-fearing lady, I found Nostalgic Nana to be a fun-loving but practical blog I could enjoy without worrying I'd wander in one day and stumble over a big pile of smarm left smack-dab in the middle of the virtual floor.
Sue is not smarmy and neither am I. At the same time, her wit is sharp and her eye is keen and her instincts finely honed. She has something I value highly: a genuine sense of humor. Like me, she loves books and music and is interested in photography, architecture, and history.
(Unlike me, Sue is an accomplished musician in her own right. The only thing I can play is a compact disc ... but in my own defense, I do it very well. I've been told I have excellent pitch.)
We're from the same generation and that's nice because we don't have to waste time explaining various and sundry things. We both were there.
We were married within a few months of one another and are both still married to the same person. Wait ... we are not married to the same person. That would be illegal. We are each married to a different person, but it's the same person we -- each of us, but separately -- married in the first place.
Also we have four children apiece. Her eldest, a daughter, is a month younger than my eldest (also a daughter), and her youngest, a son, is a year younger than my youngest (also a son). Sue's baby son is a Marine and my baby son is an Airman, and her son-in-law is in the Army, so I do believe we have the air and land and water covered.
You may sleep safely tonight.
Between us we have nine grandchildren and I am sorry to say that seven of those are hers. But my two are worth at least five more; don't you think? So that makes fourteen and now ... ta dah! We're even.
Did you get all that? Read it again ... slowly. We'll wait.
+++++
Suffice it to say I've learned a lot from Sue already, and my guess is I'll learn a lot more before it's over. And I don't just mean great recipes, although I will say I've sampled a few and you can't go wrong there.
So naturally I was thrilled and honored when Sue, headed east from Oregon for a visit with her new grandbaby, said she'd like to venture down into "the other Carolina" and have a brief visit with me.
I already wrote about this part on my blog so I won't repeat all the stuff we did because you can read about it here.
All I will add is that I've been thinking a lot about our visit and I was so impressed with how interested Sue is in simply everything. I took her to our magnificent State House and, because I love it so much, it was fun to share it with someone who didn't have to feign appreciation of its special charm.
Here's a picture of Sue, walking into the State House: 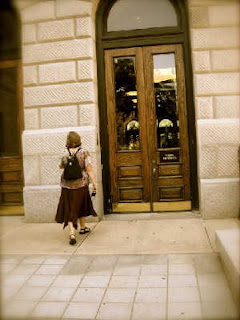 Also I promised I'd tell you about how I fell down and hurt myself and was obliged to spend Monday evening being examined by medical professionals, so here goes.
Sue's and my next-to-last stop, in the early afternoon, was Finlay Park. This special place offers a gorgeous fountain, huge inviting swings, and a perfectly marvelous view of the Columbia skyline. 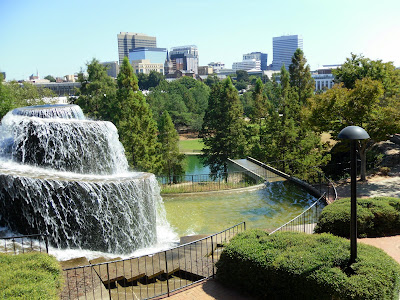 Even though it was broiling outside by then, we decided to park and walk up to where the view is most impressive. I was carrying my car keys, my camera, and a large soft drink.
On my feet were my beloved green-and-pink beaded White Mountain platform-wedge thong shoes that, despite being slip-ons, are very solid and very comfortable. I got them totally on sale at Marshalls early in the summer. 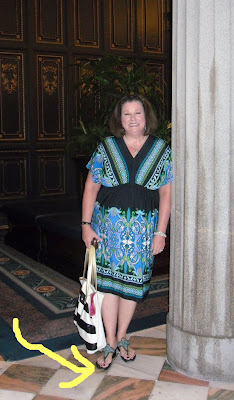 Also they twinkle and I'm all about that.
The last thing I remember before ignominiously meeting the ground at Finlay Park is looking down at the walkway, which is made up of 24-inch by 24-inch square paving stones.
Sue was over at the railing, taking pictures. I was walking toward the steps that lead up to the fountain level when the outside part of my left heel suddenly had nothing to step on.
It was like stepping right off a ledge into thin air.
I went down hard on my left knee at first. My Coke and my keys went flying. I think my camera was hanging from my right wrist and it only got wet with Coke. Then with the force of falling so suddenly and having nothing to hold onto, I pitched over onto my left side.
I told you I had perfect pitch! But I regret to say I do not believe the judges granted me any style points. It was not pretty in the least.
Sue heard me cry out and she rushed toward me, appropriately horrified, and tried to help me up. My knee was shredded and I was shaking all over but I could tell nothing was broken.
It was Sue who pointed out what had tripped me. One of the 24x24 paving stones, gradually being lifted by tree roots, was two inches higher than all the other stones. My foot caught it on the high edge and that was that.
Of course my fragile ego took quite a hit but it wasn't too bad because, thankfully, nobody but Sue was there and she didn't even see me fall. She only saw the chaotic aftermath. It could have been much worse, as in, what if fifty people had been standing around?
What if Johnny Depp had been walking through there at that very moment? Put your mind in that place with me. I know; it's unthinkable.
I would have died of embarrassment and Sue would've had to notify my next of kin and maybe even cart my carcass over to the funeral home. I would hate to have burdened her with such details when we'd only met the night before and she needed to get back to North Carolina.
So anyway, after Sue left later that day, I went to Doctors Care and was there for nearly three hours. I had to get a tetanus shot and lots of x-rays. I had contusions but nothing was broken.
And I'm fine now, thank you. None the worse for wear. Ready for the next adventure. Looking over the crowd for volunteers. Anyone?
Where did Sue Osborne go? Sue? Sue? Sue ...
I think she's hiding from me.
Posted by Sue O at 8:09 PM