A creative mess is better than tidy idleness.

I don't remember my first sewing machine. I learned to sew in Intermediate School when I was about 12. I've no doubt my Dad was thoroughly excited for two reasons. First, my eagerness to use my new talent would save us money. Two, I became creative, and my Dad was all about being creative. He could look at anything and figure out how to make it himself, then go home and do just that. From then on I sewed almost all of my clothes, plus most of my sister's and my Mum's clothes as well. Skirts, pants, blouses, jumpsuits, ballgowns. All I needed was a few hours on a Saturday to churn out whatever new lovely I needed for a hot date that night or church the next day. I remember sewing couch cushion covers, piped all around, when Dad got it in his head that he could re-upholster an old couch.
At some point I acquired a snazzy Elna, which I loved and took with me when I moved to Wellington and then back home again after my Dad died. Due to voltage differences, it stayed in New Zealand when I moved here in December 1979, but the first thing Jeff and I bought after we got married was an inexpensive sewing machine. I sewed for a drill team in Huntington Beach that first year and made dress samples for a friend in the fabric business after that, so I felt justified in upgrading to my trusty Viking a couple of years later. It cost $475, which was a small fortune at the time, but I was earning money on it and, once again, sewing all of our clothes on it. I made Jeff a brown, wool suit shortly afterwards.

Here it is, almost thirty years later, almost none the worse for wear. It did lose its zipper foot sometime back, a victim of one child or another, so I have to hand-sew all my zippers. Not a big sacrifice, because I avoid zippers like the plague anyway, and they actually look better when they're sewn by hand. I suppose I could buy a new zipper foot, but that would be too easy. 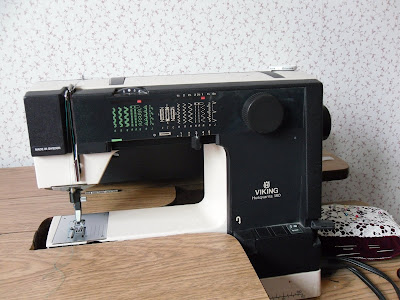 The machine got a real workout when the kids were little, I even sewed the girls' underwear. I never attempted boy's underwear, for obvious reasons. Then, when they were all teenagers, it lay idle for months at a time, except for making prom dresses and curtains and the occasional bit of mending. Since Kenzie was born, the old Viking has seen a resurgence in activity. That girl loves her dresses and skirts, so it's been fun to get creative again.
This is the result of my break from work. Nine baby blankets, a music bag, a shopping bag, and (not pictured) a cover for my doumbek.
What's a doumbek, you ask?
That's my drum. It is a very special doumbek because it has a tambourine inside. 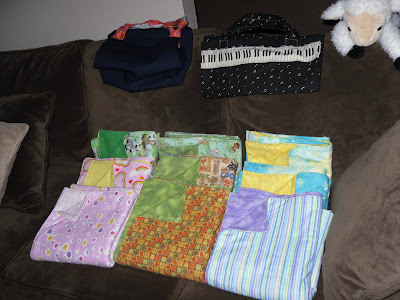 My big push for 2010 is to be creative with all of the fabric and yarn and doodads that are in my so-called sewing room. Somebody asked me, why don't you just give it away? Well, I suppose I could, but I'm needing a challenge. This will do until I can figure out the bigger one.
Posted by Sue O at 6:58 PM