As a young girl, I was relatively famous for my reading habits.
I read every single book in the small school library. I loved receiving books for gifts and treasured them. I made paper covers and a bookmark out of cardboard to slip inside each one. I read Little Women at least ten times and owned all four books in the series. The Secret Garden was probably my favourite book and I was more than a little in love with Dickon. 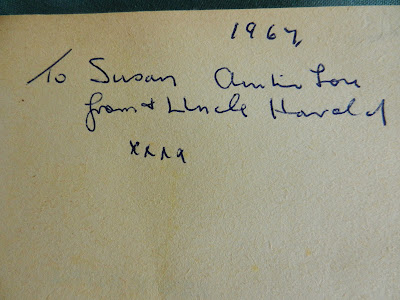 My friend, Janet, told me once, years after we had left England, that the thing she remembered most about me was how I was always reading and chewing on my leather bookmark. I still remember the taste of that old bookmark.
I also used to tear off little pieces of the page corners and eat the paper.
True story.
If Jeff had known the depth of my dysfunction, he probably would have run, screaming, for the hills, instead of luring me away from my friends and family.

This little gem is all that remains of a favourite book of both Anne's and mine.
Little Old Mrs. Pepperpot. It is about a little old woman who has the annoying habit of shrinking to the size of a pepper-pot at the most inconvenient moments.
I should probably toss it, as no one will ever read it again, unless I can convince some of my younger grandchildren to sit still long enough to listen to it. It is cover-less and falling to pieces. But it is a remnant of that innocent time and I cherish it. 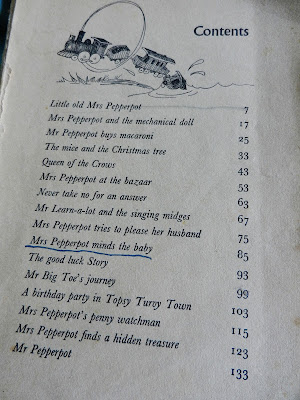 Does it make me a hoarder if I confess that I still own most of the books that were mine as a child?
The Little Women series, all brown-spotted and ragged, but with paper covers and bookmarks still intact. 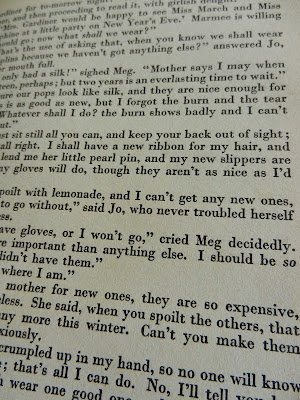 For many years, I have been a fan of the murder and mayhem as promoted by such authors as James Patterson and Patricia Caldwell. Lately, I have lost patience with the increasing brutality and decreasing chapter size and quality of the writing and have been looking further afield for my reading pleasure.
Lately, and with no particular intent, I have been reading books that are set in the time frame of the Second World War. Here is a quick list of some of them that I think you will enjoy.

Hotel on the Corner of Bitter and Sweet. By Jamie Ford. A tender little tale of a love that never died, angst between father and son, and the Japanese internment camps in Washington state. There are some twists that make you want to read the book again in order to catch the clues.

The Zookeeper's Wife. By Diane Ackerman. This is an immaculately-researched book about the Zabinskis, a couple who ran a zoo in pre-WWII Warsaw and who saved the lives of hundreds of Jews during the war. The details of their life as they continued to live at the zoo with a variety of animals and transient Jews in hiding is fascinating. Antonina Zabinski, the wife, kept a journal, so many of her thoughts and fears are taken directly from the journals. I loved this book.

Sarah's Key. By Tatiana de Rosnay. A little-known event that took place in Paris in July, 1942, is the basis for this story. The French police were told by the Nazis to round up Jews for deportation, which they proceeded to do with great diligence. The plot bounces back and forth between present-day Paris and 1942, and has some horrifying, as well as redeeming, turns. It is an easy read but will twist your heart inside out.

The Book Thief. By Markus Zusak. I'm sure I am the last person to read this book, but I loved it and have to recommend it. The format is a little strange and takes some getting used to. It is narrated by Death and bounces around a bit, but once you get it figured out, the unfolding of the story is mesmerizing. I read it in about 24 hours; I think I stayed up until 2 o'clock in the morning to finish it! The story is about Liesel, a girl in  World War II-era Germany, the people she loves, and the books she steals. It is a story about selfless love, nightmares, the Jew in the basement, and the value of a good book. This book will make you laugh and cry, sometimes at the same time.

Today I am thankful for authors who write good books, books that are well researched and tell worthwhile stories of human courage and foibles and the love that can be found in the cracks of history.