A little sadness in the air

I am sad to report that Bethany is no longer pregnant. We went to get an ultrasound last week and the doctor announced, rather off-handedly and with no preliminary, that there was no baby. I could have strangled him and, in retrospect, I probably should have. He wasn't sure what happened, but the baby did not develop.
So, for the last week, Bethany has been dealing with the physical and emotional fallout from that abrupt pronouncement. She called me this morning and said Mom, I need you to come out here. It is unlike her to be demanding, so I made some calls to reschedule my appointments and off I went.
Hoo-ee, those four little darlings can wreck a house in no time at all when Mommy's feeling under the weather. I rampaged around, putting kids to work and doing laundry and feeding everybody.
The weather outside was....delightful! 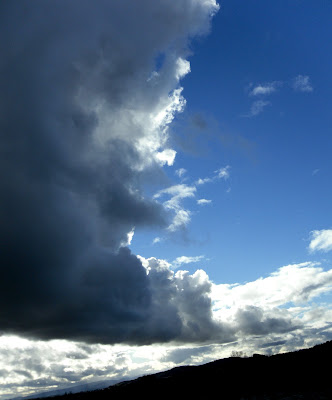 After setting the house (downstairs at least) to rights, making sure Bethany was going to survive the day, upsetting Natalie enough that she took a nap, and putting Chris to folding mounds of laundry, I headed for home.
I brought Kenzie and Daniel with me.
They lost no time in ferreting around to see if there was anything worth mooching.
Kenzie walked out of the sewing room with a nice little journal that I've been saving for a random gift. She wanted to know where I got it.
From the store, I answered.
Duh!
Later, I found this on my bedroom door. 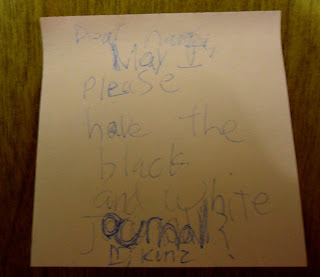 What a con artist that girl has become!
So then, of course, Daniel wanted one too.
Why, I have no idea!
I told him I didn't think I had another one. 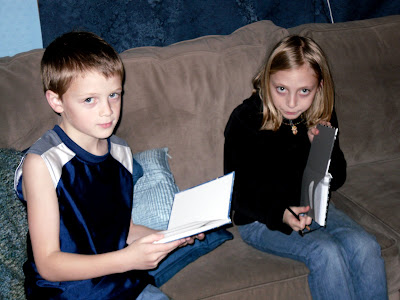 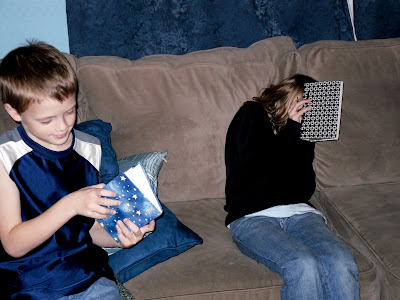 Which just goes to show how much I know!