The story of Carrot 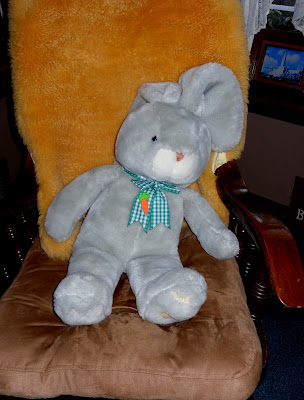 Many years ago, before Carrot even had a name, he was an Easter gift to a youngish wife from her slightly romantic husband, Jeff.
On good days, he sat atop their nicely made bed.
On bad days, which was mostly, he languished on the floor, where he had been thoughtlessly tossed as the youngish wife crawled into bed after long days of refereeing four children.

Then, after several years of increasing prosperity, Rabbit's owners added a very tasteful storage bench to their bedroom accoutrements. It was placed at the bottom of their four-poster bed and the wife thought to herself, Self, that silly rabbit would look very nice sitting on this tasteful bench. So she retrieved him from his ignominious heap of rabbitdom on the floor and sat him in the corner of the bench.

But then she noticed, oh horror, that Rabbit was a tad crusty. On closer inspection, wife indentified it as dried milk. How dried milk had been spilt on Rabbit could hardly be imagined, unless it happened during those surreptitious forays into the under-the-bed chocolate stash. Which were always accompanied by a glass of cold milk. So wife cleaned up the old rabbit till he was as good as new and placed him lovingly on the bench.

And there he sat.
Unless he was on the floor, having been dumped, yet again, as not-so-young wife hunted for treasures in the storage bench.

Then one day, not too long ago, definitely-not-young wife decided that, sentiment aside, it was time for Rabbit to meet the Goodwill bag. So she girded her loins (wherever she could find them) and hurriedly stuffed him into the bag.

But wait, all is not lost for Rabbit!

A few days later, he was discovered by four intrepid grandchildren and gloriously named Carrot.
They played with him, fought over him, and called him by his name, over and over again.
Carrot, Carrot, Carrot!
They took him home for sleepovers.
But they always brought him back to Nana's house.
Who does not dare to ever throw him out again.

Which is kind of a happy ending for Carrot, don't you think?